Samsung fired up its own rewards program in late 2016 to promote Samsung Pay, and it later expanded to a few other products. Anyone who's been serious about earning points with Samsung Pay might notice something has changed. Samsung is now only offering half as many points for qualifying transactions.

Samsung's rewards for using Pay are arranged in a tiered system. You get points for each transaction based on how many times you use it in a given month (30 transactions or more is the top level). The reward tiers for member, silver, gold, and platinum used to be 10, 20, 30, and 40 points. Now, they're 5, 10, 15, and 20 points. Even if you use Samsung Pay just as much, you'll earn half as many reward points as you did a few weeks ago. 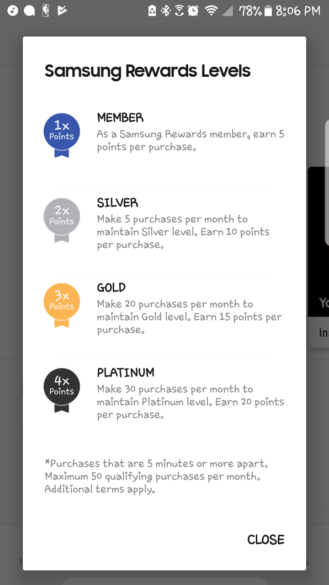 The points can be exchanged for Samsung products, gift cards, and even entries in giveaways. You have to accumulate a substantial number of points for anything good, so cutting the points in half is a real bummer for anyone close to a good reward. You can supplement by using Bixby or Samsung Internet to get rewards points, but you shouldn't have to change your habits for reward points.