Google just started rolling out Android Wear 2.8 earlier this month, but it's already talking about Wear 2.9. Like the last update, this one isn't making huge changes to the nature of Wear. It does, however, include a few new options for notification counters on your watch face and some changes to the way developers handle complications.

Starting in Wear 2.9, a dot-style indicator (which was optional before) will be displayed by default at the bottom of watch faces to indicate you have unread notifications. Developers can customize the color of this indicator if the standard white color doesn't look good with a watch face. Developers can switch the indicator off or use the counter style, which is a more interesting option. The counter appears at the top of the watch face in the "system tray." There's also support for showing the counter in a custom location.

The other change detailed by Google is an improvement to the ComplicationDrawable class. This is a bit in the weeds for users, but developers will want to take note. In v2.9, complications will ask for permissions when selected from the settings (no custom code is needed anymore). There's also a new feature to draw watch faces more efficiently when they contain large images or icons. 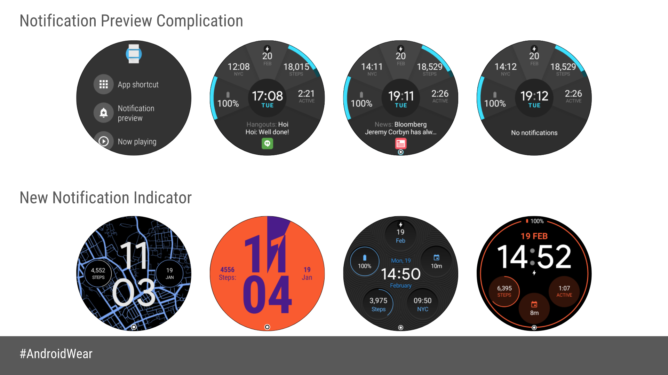 This is all part of the new SDK 2.2.0, so developers can begin testing right now. It includes the final Android Wear Oreo emulator, which will take time to hit devices.

According to a new support page, Android Wear 2.9 is rolling out now. As long as your watch has some version of Android Wear 2.0, you should get it at some point (Oreo is not a requirement).

You also can manually download the phone companion and the watch app from APKMirror.