Over the past couple of months, more and more phones have begun receiving Android 8.0 Oreo. Despite being about six months old now, Oreo is still rolling out to several devices, slowly contributing to its 1% marketshare. Just recently, Samsung started (and then stopped) the official rollout of Oreo to the Galaxy S8 and S8+, and now ZTE is joining the club by announcing its Axon 7 A2017U Oreo Preview Program.

The beta program is a little different than usual, as users have to apply to enter instead of simply enrolling their device. Owners of a USA version of the Axon 7 A2017U that is currently on build B35 have a shot at joining the Oreo beta program, as long as they meet the required conditions — and they are a little steep. Among other things, users will have to affirm they are "willing and able to provide at least 1 hour per day to engage and provide feedback," say why they feel they are "a reliable and qualified candidate for this beta test," and even state their level of Spanish proficiency (¿?¿?). It's probably safe to say that the beta program isn't for everyone. 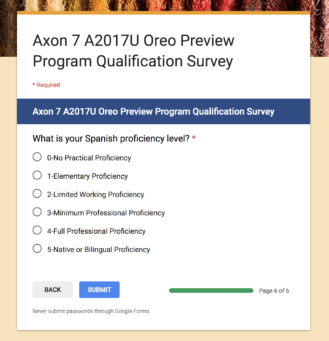 If you feel adventurous enough to install a likely unstable version of Oreo on your Axon 7, you can sign up in the Google Form linked here or in ZTE's community post. Spacing is limited, and those who are selected to join the program will be contacted individually. Otherwise, ZTE has said that testing will be done in phases, so you can join the program when the builds are a little more stable and the conditions a little less stringent.