With a device as pricey as the Pixelbook, you're probably going to want some sort of protection to make sure it doesn't get scratched or dented. The Google Store currently sells a leather Bellroy sleeve for the Pixelbook, but at $89, it's rather expensive. If you don't want to spend that much but still want a Google-approved solution, you're in luck - the 'Sleeve for Pixelbook' is now showing up on the Google Store as 'coming soon.' 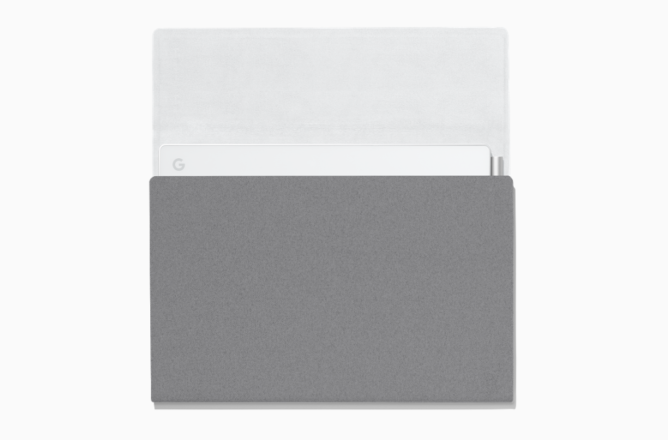 The page has actually been around for several weeks now, as some redditors on r/chromeOS discovered. However, it's only now been actually linked in the Google Store, though it still says 'coming soon' with no price listed. Unless Google tacks an OEM accessory tax onto this, it should probably come in at a decent amount cheaper. It features a heathered microfiber exterior, a microfiber lining, and a magnetic closure. The Pixelbook Pen also fits inside. It only comes in Stone, but hey, that's a pretty nice color.

Oh, and for those of you Pixelbook owners with Pixelbook Pens out there, the Google Store will soon sell pen replacement tips at $15 for three and some tweezers included, or $5 a pop. That's not terrible, but they're still more expensive than you'd think.

The sleeve is now available on the Google Store for $100 - more than its Bellroy competitor, which many of you speculated would happen. Gotta love how expensive OEM accessories can be.

Here are some Android-themed love cards for Valentine's Day