Essential launched its first phone last year with Nougat, but it promised a quick update to Oreo. Well, sort of quick. We're still waiting for the final update, and the company recently decided to skip 8.0 altogether. Sure enough, the first Android 8.1 beta is rolling out as an OTA.

Since this is the first 8.1 build, there are a few minor system feature changes, as well as new fixes from Essential.

If you're already running the 8.0 beta, you should have an update to this version waiting. Here's what you can expect. 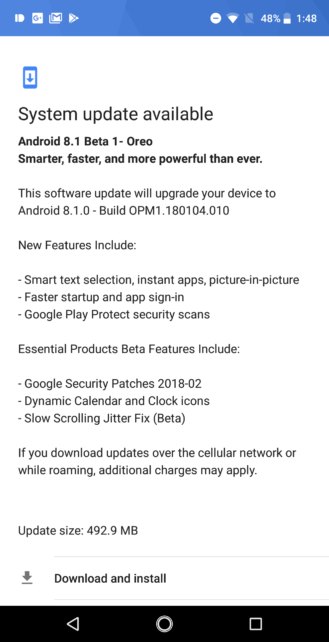 Note, the "new features" listed there are actually from 8.0. You should already have that in the last beta. Smoother scrolling would be much appreciated, though. The Essential Phone has great specs, but it doesn't always feel as fast as it should because of little things like that. Hopefully, the 8.1 update works out the bugs that prevented 8.0 from reaching a final release.

So far, this update is only going out as an OTA. The 8.1 beta will presumably be added to the developer site soon.

Android 8.0 Oreo supposedly released for Sprint HTC 10, but no one has received it

Here are some Android-themed love cards for Valentine's Day