Almost three months ago, we reviewed Huawei's Mate 10 Pro. We concluded that it'd be a good buy when it hit the US market, so long as it wasn't priced at $1000. Well, Huawei hasn't made that mistake (the phone is currently $799.99 with a $150 gift card at Best Buy), but it isn't doing itself any favors today. The company has overloaded the Mate 10 Pro's Best Buy listing with over 100 fake reviews from aspiring "beta testers," giving the phone - one still in the pre-order phase, mind you - a 4.9-star overall rating. 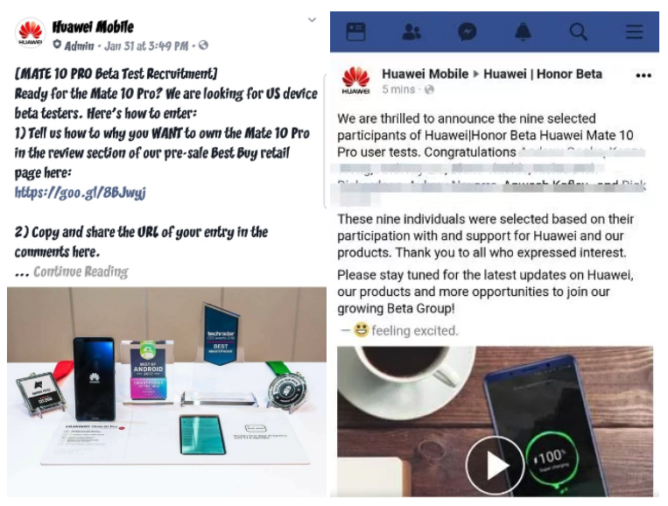 You might be wondering how exactly Huawei managed to get over 100 people to write positive reviews on a phone they've never even held in their hands. Well, Huawei Mobile runs a Facebook group in which it asked aspiring "US device beta testers" to "tell us why you WANT to own the Mate 10 Pro in the review section of our pre-sale Beat Buy retail page." That was posted on January 31st, and the nine winners were announced on February 9th. Lo and behold, a large portion of the reviews were posted in that time span.

Those who take a quick glance at the Best Buy listing's 4.9/5 rating will probably be impressed, but dig any deeper and things immediately get suspicious. It's brutally clear that 99% of them have been written by people who've never used the phone (keep in mind that the Mate 10 Pro is still in the pre-order phase), though a handful are from photographers who've already been sent the phone for camera-testing purposes. Huawei Customer Care has actually replied to a few of them with generic comments like "Thank you for your nice comments on the marvelous Mate 10 Pro. We hope you join the Huawei family soon!" We've screenshotted some of the funnier reviews for your perusal below. Huawei has a pretty strong marketing presence online, even with some tech websites, but asking its fans to write fake reviews on a retailer's product page obviously crosses a line. In fact, as 9to5Google noted, it's against Best Buy's review policy, which states that “We reserve the right not to post your review if it contains any of the following types of content or violates other guidelines,” such as “advertisements, “spam” content, or references to other products, offers, or websites." Basically all of those guidelines have been violated in these reviews. The fact that the Mate 10 Pro isn't even officially out in the US yet (Best Buy's site clearly says "Pre-Order" on a big yellow button) makes the whole situation even more laughable.

Hopefully, Best Buy catches onto this scheme pretty quickly and cleans the listing up. It's pretty mind-boggling how a company thinks it can get away with something like this in 2018, especially since some of the reviews explicitly mention the contest. We've reached out to Huawei for comment and will update the story if we hear back.

Every last review of the Mate 10 Pro has been removed from Best Buy's site. Huawei has given this statement to several other sites:

Huawei’s first priority is always the consumer and we encourage our customers to share their experiences with our devices in their own voice and through authentic conversation. We believe there is confusion around a recent social media post reaching out to recruit new beta testers.  While there are reviews from beta testers with extensive knowledge of the product, they were in no way given monetary benefits for providing their honest opinions of the product. However, we are working to remove posts by beta testers where it isn’t disclosed they participated in the review program.

If you don't want to read all that, it's just a bunch of PR nonsense, and there's no apology in there. Reviews aren't intended to bring "authentic conversation" if the person submitting the review has never had any hands-on time with the product at all. Reviewers were not technically given monetary benefits, but considering about 8% of people who wrote them are slated to receive a complimentary $800 phone, that's not entirely true. And Huawei merely says that it is "working to remove posts by beta testers where it isn’t disclosed they participated in the review program," not all of the reviews by people who've never touched the phone (a huge majority). In fairness, I did see one or two reviews that did mention hands-on time, but those Mate 10 Pros were also given for free as well for photography testing purposes.

At least Best Buy's done the right thing and removed all of them. Goodbye, misleading 4.9-star rating.