There's a new beta update to the Google app making the rounds. Like so many others, this one doesn't bring a lot of changes when it is first installed, but there are plenty of bigger things under the surface waiting to break out. While you can begin donating images to Google Lens today, the future also promises to have smart displays with shopping and YouTube suggestions, more places to set your default output devices for Assistant, and more.

In a teardown of the Google app last month, we saw that there would be an option to share images taken through Lens with Google for review by real people. As of version 7.21, that option can now be set. 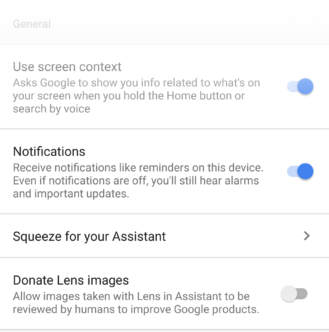 The setting is a little buried in the Google app. You can find it in the Assistant settings -> Phone (or Pixel), and scroll down to the bottom of the page to find the toggle. It is disabled by default.

This should allow Google to get a better idea of how well Lens is performing, if there are ways to improve, and perhaps even give guidance on the types of things people are trying to identify.

The Google Feed lost a bit of relevance after it was renamed from Google Now and it could no longer be launched with a long-press (or swipe-up) on the home button. Nevertheless, it's still a fairly important part of Google's software experience on the phone. However, the content that appears in the Feed is only as good as Google's impression of what you want to see.

If you get article suggestions that don't suit your taste, you can already mark your disinterest in the specific topics or publications. Likewise, adding topics to your lists of interests or even the mere act of tapping on some articles to read them is telling Google you want more. There is even a micro-question on some suggestions that asks "is this card useful right now?" Despite these options, you may want to give more active feedback, and that appears to be what Google is working on. New text shows users will be presented with options to request more or less of certain topics.

Given that these are very binary choices, and the string names are prefixed with "reaction," I suspect users will see these options when they either dismiss a story from the feed or after returning from reading the article. Regardless, Google is open to additional feedback that might help make its suggestions a little more useful.

During the first teardown to seriously discuss Quartz, Google's smart display platform, many new features were mentioned. Some had significant details while others only got a passing mention, mostly because they didn't appear to be fully implemented. One that didn't get a lot of time was the topic of shopping.

In the original post, there was text relating to product names, availability, price, reviews, and more. At the time, it looked like only browsing was supported in the then-current form of the software. The latest update brings the text that shows ordering functionality is now implemented as well.

I mean, did anybody think it wouldn't be...

While we're on the subject of things obviously happening on the upcoming smart displays, there will be YouTube recommendations in the feed. I doubt this needs any more explanation.

If this sounds familiar, it probably should. Back in October, Google added a feature to Assistant-enabled devices that allows them to automatically select speakers or a television in response to play requests for audio or video sources. These settings are currently only available through the Google Home app. It's not strictly necessary, but it's profoundly more convenient than repeatedly naming the destination every time you want to watch a YouTube video. 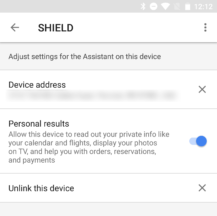 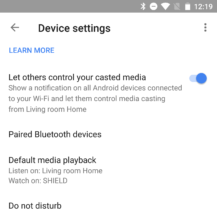 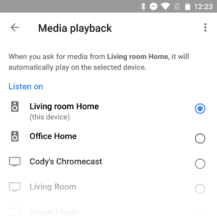 This update to the Google app includes a pair of new titles and descriptions for the same functions. Judging by where they will be used in the Assistant Settings, it's fairly clear these are going to mirror to the existing settings, but within the Google app itself. This should give users more places to find a feature that just about everybody should want to use.

Note: Since our phones move with us from place to place around our homes, they will probably not get an option to set default output devices.

Routines: Simon says 'repeat after me'

A number of sources have said that Routines – user-defined actions capable of multiple steps – were expected to launch in January. Regardless of whether or not the rumors were wrong or the feature is taking longer than expected to wrap up, there is at least some activity on that front in this update. According to new text, it will be possible to set up routines that have the Google Assistant speak a phrase defined by the user.

I have to say, this is the simplest action Google could have added, but it will give us a lot of utility, and it'll probably be a lot of fun. Besides the obvious jokes it will be possible to achieve, it will also give us the ability to cap routines with messages to let us know something is finished. Just think, you could design a wake-up routine that ends with the Assistant saying, "Jarvis, out." I don't care what anybody says, I want that.

The Google app has no shortage of notification channels, but most of them are focused on a set of Google Assistant features that aren't strictly familiar to most of us. Five new channel names were added with this update, though none of them appear to be in use yet.

The first is fairly obvious, as it relates to Cast-enabled activity. If there's going to be a Cast channel, it may indicate that the current parent to that channel, Google Play services, may be relinquishing responsibility to the Google app. That's just a guess, but I can't find any evidence of any other likely functions. Besides, Google Play services currently files Cast notifications under "Uncategorized," which has gone overlooked a bit too long. 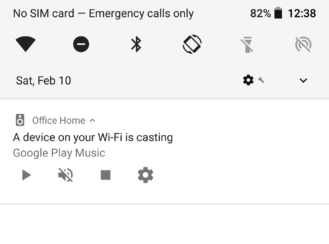 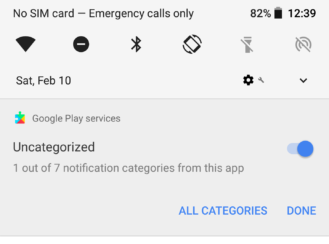 The other channels are all related to Google Assistant (based on the "opa" prefix in their names). A couple of them, Assistant and Miscellaneous, aren't particularly interesting since they'll probably be used for mostly familiar functions.

The two that interest me are called Hand-off and Proactive. I can only guess at their function, but I've got a feeling the hand-off channel may be used to display notifications when Google Assistant detects somebody speaking a hotword, but backs off when a nearby Google Home answers the command. Perhaps this would give users the option to force commands to be answered on their phones. As for the Proactive channel, I don't have any specific examples, but it's not hard to imagine several ways Google might use contextual clues to pop up notifications users might want to act on.

None of these channels appear to be live yet, but they might go into use between now and the next update.

I don't normally like to cover non-changes, or at least the relatively uninteresting changes, but we've received a few questions during the preparation for this teardown, and I thought they may be worth addressing. It has been reported elsewhere that some newly added strings may indicate Google is planning to launch a device with a physical button to launch Google Assistant. It sounds plausible in light of devices like the Pixel 2, which can detect a squeeze on the edges of the phone to launch Assistant. Here is the text in question:

It's the names of the strings, with the word 'hardware' in the beginning, that raises attention. Naturally, this is a pretty clear sign that these lines are related to instructing users on pressing a physical button to launch Assistant.

Further examination of the app and decompiled code links these instructions to the setup procedure used with Chrome OS. This should make sense as the phrasing closely resembles another instruction found last year that originally revealed a hardware button may be used for launching Assistant. Of course, that hardware later turned out to be for the Google Pixelbook, a laptop equipped with a dedicated key for launching Assistant. I have received separate verification that these lines are not currently intended to be seen on phones.

None of this is to say that Google won't be releasing new products with buttons dedicated to launching Assistant. After all, devices like the Pixel Buds, Google Pixelbook, Google Home speakers, and others are all designed to launch Assistant with the press of a button (or capacitive sensor), so it goes without saying that there will be more. Just days ago, we posted an article about code committed to the Chromium project that infers Chromebooks made by other OEMs may soon get to enable Assistant, many of which will probably also link activation to a keypress.

Sorry, but the hype can be disregarded for now.