For the longest time, we've suspected that Android's "Check for update" does nothing to actually get you the update. If you were in the group that is supposed to receive the update, the button simply sped up the process instead of waiting for the next automatic check to reveal it, but if there was an update and you weren't in the group, it did nothing to push you forward in the waiting line. Then in September, we were promised that manually pushing the button on Nexus and Pixel devices will get you an available update even when a passive background check wouldn't, and it worked momentarily. But we later discovered that an update to Google Play Services broke the button again and it wouldn't be back to working order until 2018.

Well, it's now 2018 and it appears as though the "Check for update" function is working again. Yesterday, I checked for the February security patch OTA on my Pixel 2 XL and got nada. Artem did the same and complained about it, as Artem does, everywhere. Today, an update to Google Play Services, i.e. the cause of all woes, to v12.2.09 rolled out to the beta channel and we received many reports of it fixing the button. Artem installed the beta and checked for an update and immediately got the February security patch. I noticed that my phone was already on v12.2.09 by the time I woke up, checked for the OTA, and there it was. Many users are reporting the same thing, though mostly on the Pixel 2 line. On the original Pixel, reports are mitigated. This Reddit thread also confirms it. 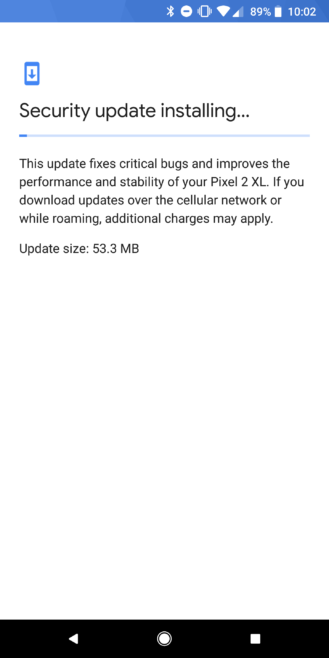 Ah the beaut of it doing what it's supposed to.

If you want to test it out for yourself, you can either join the Play Services beta on the Play Store and wait a bit for the app to update to version 12.2.09 or grab the proper variant APK for your device and install it manually from APK Mirror. Either way, once you're on v12.2.09, head over to System update in your phone's settings and if you're still on the January security patch, check for an update. It should, hopefully, pull up the February OTA right away.