You may have never heard of TabTale before, but that's probably because they tend to concentrate their efforts on "super casual indie games." The thing is that appears to be working in their favor as they have a breakout hit on their hands with the recent release of Run Sausage Run!, a free-to-play endless runner. Within the last 6 weeks of the game's initial release it has racked up over 10 million installs, and its popularity is showing no signs of slowing down.

For the most part Run Sausage Run! is a standard free-to-play endless runner. Your primary task is to run as far as you can. You do this to compete in the game's leaderboards, but also so you can collect as many coins as possible during each run. These coins can be used to unlock new skins for your sausage. There are also quite a few achievements to work your way through, which will also unlock some goodies such as new skins or more coins. So like I said, the gameplay doesn't really offer anything we haven't seen before, though that isn't always a bad thing, such as in this case.

When considering the gameplay, you may be asking yourself why Run Sausage Run! is so popular? If you take a quick look at the art-design, the cute graphics, and humorous setting, the reason why so many people are installing this game becomes a bit more clear. Everything about how Run Sausage Run! looks is pure awesomeness. Running around as a sausage in a clever-filled kitchen is going to be dangerous work, and the art direction shows this off in spades. The numerous gruesome ways your sausage can die can be quite entertaining and are the main reason I kept coming back for repeated plays.

Now, as far as monetization is concerned, Run Sausage Run! is actually pretty decently priced. You can play the game as much as you like for free, though there will be plenty of advertisements that pop up in between rounds of play. What is nice is that you can remove those ads with a single in-app purchase of $0.99. There is also a coin doubler for $2.99, and a few coin packs that range up to $4.99. All of these are purely optional.

I also noticed that Google Play Games Services are supported by the inclusion of an achievement system and leaderboards. Sadly there is no cloud saving support. So if you plan on playing on multiple devices, your saves will be completely separate. 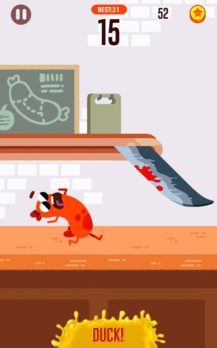 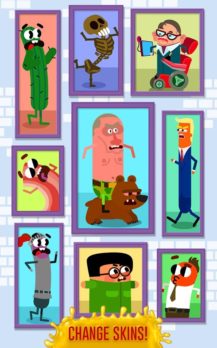 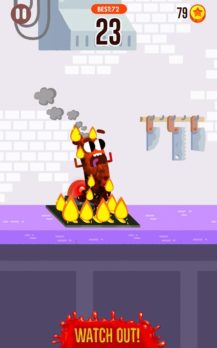 All in all, Run Sausage Run! is an enjoyable endless runner that has an amusing theme and a perfectly acceptable monetization scheme. Sure, the gameplay may not offer anything new. But when you are looking for a quick casual game to play in your downtime, depth often doesn't come into the picture. As a free game Run Sausage Run! is a simple title to pick up and play that offers a good bit of fun, and as a paid experience the same can be said since you won't be nickel and dimed past your initial ad removal and coin doubler purchase. TabTale has struck a perfect balance of free and premium, and the downloads on the Play Store reflect that balance with over 10 million installs and counting.