The default alarm tone for the Google Home may leave a tiny bit to be desired, but thankfully Google has just introduced an alternative: you can now set your next alarm to play music instead. So the next time you need to set an alarm for an impromptu nap or that bird in the oven, you can be jerked back to awareness with something a bit more entertaining.

The new feature was documented by Google on a support page for the Google Home, and it works easily. Just ask your Home to "set a [music/media/radio] alarm at [time]," and the Assistant will respond by asking what song you'd like it to play. Once you let it know, the alarm is set, and you'll hear the requested song at the set time. According to Google's announcement, you can even do it entirely in one combined command. Simple, right?

Even if waking up isn't your jam, at least you can wake up to your favorite jam. "Hey Google, set a music alarm for 7am." → https://t.co/Nucr8FUL90 pic.twitter.com/jh2mDSKkd6

The only drawback is that this new feature can't be set as a default, so the quicker "set an alarm at [time]" command will still use the standard alarm sound. And, keep in mind that the music will be pulled from the account settings for the person making the request. So if you use Spotify elsewhere at the same time, that could be a problem. 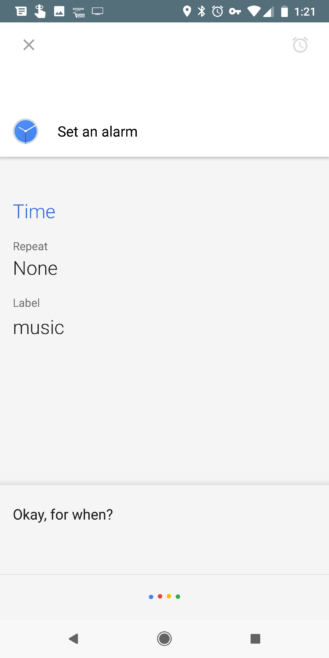 The same command doesn't work for the Assistant on a phone, unfortunately.

We knew that functionality like this was coming sometime soon, based on Cody's analysis in a recent teardown. We'll have to see if this feature gets expanded in the future, though. For now, it only works on Google Home devices.