Many things come to mind when I think of smart home accessories: speakers, locks, displays, TVs, or maybe wall plugs. The list continues to grow each day it seems, but here comes Anker with a car charger that, while itself not unique for the company, features Alexa as a defining feature. Don't want to fork over the money to get Assistant in your car? Here's the next best thing... kinda.

I will admit, when I first heard of this, I was dubious if not outright skeptical. After one of the Anker guys demoed the Roav Viva for us at CES, I became a little more intrigued and said I would take a look at it.

Overall, I found that I do not dislike the Viva, even though it is fun to mock it every now and again. It has a small amount of utility, but a car charger with Alexa is certainly more of a novelty, especially when compared to its "dumb" counterparts.

I will be brief here, since the Viva is just a car charger, although larger than the average one. Check the measurements to make sure that it will fit in your car in case your cigarette lighter is in a weird place. 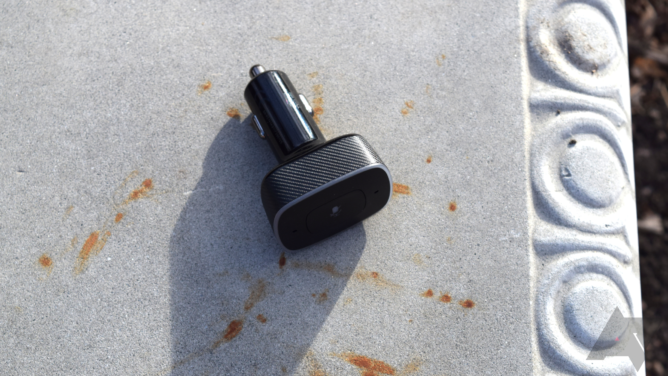 The head of the Viva houses all of the smarts, both USB-A ports, and I assume some of Anker's PowerIQ charging tech. The face consists of the two microphones and one big button to manually activate Alexa (though it does respond to the vocal hotword). Around the edge is the blue LED "ring" that you often find on Alexa-enabled devices. It remains on to indicate that the Viva is active and ready to process commands, though it can be quite bright at night — thankfully, the app lets you adjust the brightness.

Overall, the Viva feels like a solid piece of plastic. The button to activate Alexa/mute has a nice and satisfying tactile response. During my use, I did not notice the charger getting warm, even when charging two OnePlus 5Ts simultaneously. Due to the placement of the cigarette lighter in my car, I knocked into the Viva with my knee when I got in the passenger seat. Even though I bumped it pretty good, it held up and stayed in place in the lighter port. 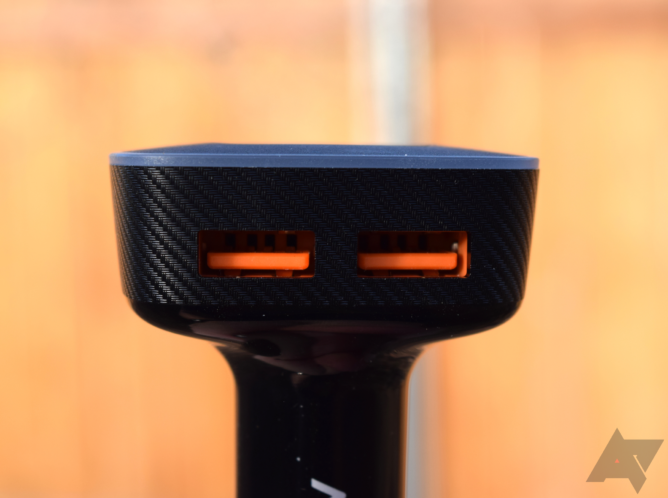 Anker states that the Viva, thanks in part to nickel plating and polymer capacitors, can withstand temperatures between -4°F to 257°F, meaning that the charger should remain functional in most any climate condition.

Beyond all this, there is not much more to tell. It's a car charger.

On its own, the Viva is pretty terrible when it comes to sound. This is no surprise, honestly, considering that the Viva is a car charger. To compensate for this, Anker provided two ways by which you can route audio through the car speakers in order to make it more audible.

Both methods use your phone as an intermediary between the charger and the car. The gist of this is: you talk to the Viva, it pushes the request over its connection to the phone for both data and to access your car's sound system, then it responds over that audio connection — it left me wondering if the Viva is silly or genius. 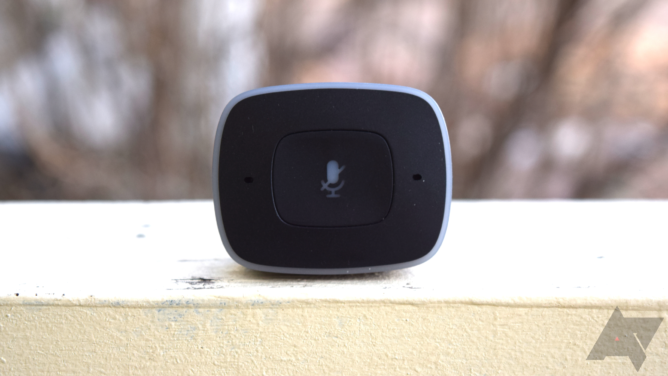 Of the two methods, the most basic is via the aux line-in for us old school types. This comes with the usual inconveniences present with plugging in your phone, but when you initiate an Alexa command, you will hear the response over your car speakers.

The second way is with Bluetooth. When setting up the Viva for the first time, the app will ask which audio method to use. Selecting line-in takes you to the next screen, but choosing Bluetooth shares the phone/car connection with the charger. This means that all responses to Alexa queries get routed through the car speakers, but without the inconvenience of plugging in the aux cable to the phone.

Anker claims that the technology in the Viva allows it to hear you above the din of road noise, radio, conversations, and whatever other chaos that may plague your cabin. Two microphones and a noise canceling chip help reduce background sound by 30%, meaning that the Viva is much more likely to actually hear you. It also features echo cancellation and voice isolation to ensure better accuracy.

The main highlight and centerpiece of the Viva, Alexa is the reason that anyone would be interested in this car charger versus other options. Like I said in the intro, a car charger is the last place I expected Alexa to pop up, but I respect what Anker is attempting to do — adding smarts to a car is a costly endeavor, even when head units go on sale. 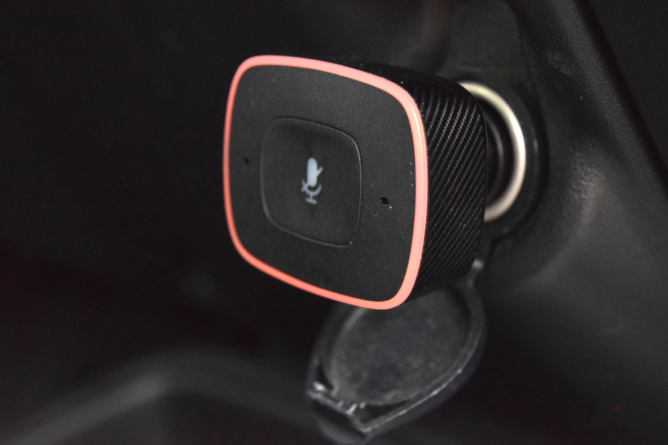 The Roav Viva offers people a way by which they can add hands-free, smart features to their vehicles. With this device, you get access to the 25,000+ Alexa skills that you would find on other products, like the Echo. The Viva uses your phone's data connection to process the query (and the app sits in the middle of the process, too) and it is an overall seamless experience, assuming that you use either of the two audio routing methods available.

I am far less familiar with Alexa than I am with Assistant, but I did not come away frustrated or annoyed with how the Viva responded to my queries. Alexa's voice is not as pleasant as Assistant's, I think, but as long as my phone had data, Alexa came back quickly with an answer or response. That's about all one can ask for, right?

When I saw that a companion app for the Viva was required to use the non-charging bits, I was a bit nervous. Rarely are accessory apps good, especially for the stuff I typically review. However, I was pleasantly surprised when I installed and opened the Roav Viva app for the first time. The interface is clean and unobtrusive, while the app itself is light and responsive. 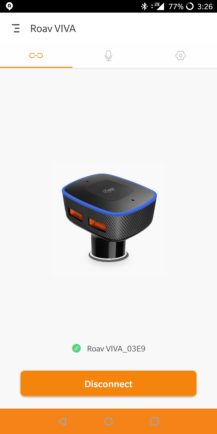 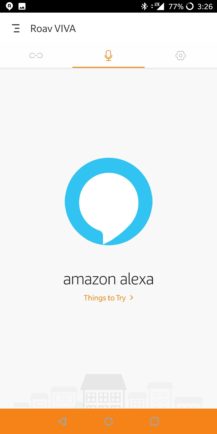 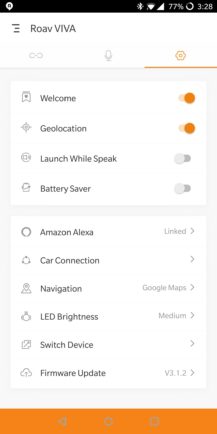 It guides you through the steps of setting up the Viva, including which audio option you want and signing into Amazon to use Alexa. The settings menu has plenty to offer, such as which service to use for navigation, the LED brightness, a battery saver mode for the host phone, and firmware updates.

Overall, the Roav Viva app experience was a positive one. The white and orange color scheme is somewhat eye-searing in the dark, but that is easily overlooked thanks to how fast and clean the app itself is. Good job, Anker. 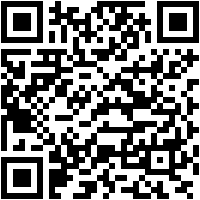 Anker Roav Viva
8/10
design
8.5/10
reliability
9/10
value
9/10
Roav's (Anker's) Viva is a weird little device. It elicits nearly the same reaction from everyone I have told about it: "A smart car charger? Why?" I certainly had my doubts initially, but when I took a step back to reconsider the Viva, I started to like it a bit more, even if the novelty quickly wore off.

The greatest benefit, I think, has been an effective way to add a hands-free system to my car without forking over a few hundred bucks. Even if your car does not have Bluetooth, you can benefit from the Viva (assuming that you either have a native aux input or a cassette player). The Viva represents the pinnacle of accessibility, especially since it costs a mere $49.99.

Because it's an Anker product, you can expect stable charging, too. Like I said, I tried charging two OnePlus 5Ts simultaneously and I was pleased with the result. No Dash Charge level of insanity here, but I regained a respectable amount of juice.

What's great about the Viva is that it can be for everyone, and I applaud Anker for creating a product that proved my skepticism to be unfounded. The only problem, however, is that the Viva's novelty is just that: a luxury and a newness that wears off rather quickly. I would oftentimes forget that the charger had Alexa, even with the nice blue LED ring. And while I have an extremely short attention span, I surmise that many people who buy the Viva will feel the same eventually.

Samsung posts best ever financial results in 2017, with profits of $50 billion