Amazon offers various cloud services to consumers as well as businesses. In fact, some makers of home security cameras use Amazon's web services to store video. It only makes sense for Amazon to get into this market as it increasingly pushes home automation with Alexa. The Cloud Cam is a 1080p indoor security camera with a competitive price point of $120 when it's not on sale. This camera has a lot going for it, but it's clear Amazon is still just getting started with home security—the Cloud Cam is missing just enough that other cameras might be better options, even if they're more expensive.

The Cloud Cam bears a passing resemblance to the Nest Cam IQ, which is more expensive by several hundred dollars. The build quality doesn't seem up to Nest's level, though. That's not to say the Cloud Cam is poorly built—it's fine, and this is something I'll come back to a lot in this review. So many things about this camera are just fine. Not better than the competition, but fine when you consider the price. 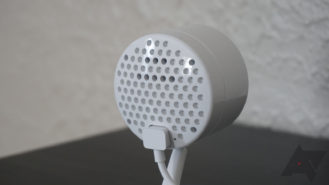 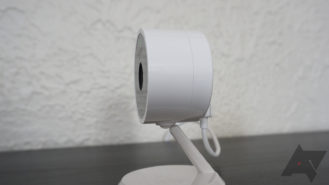 There's a plastic adjustment joint between the cylindrical camera module (about 2.5-inches across) and the base that lets you tweak the angle. The microUSB power cable plugs into the back of the camera, which then dangles awkwardly behind the stand. Connecting the power at the base would have made for a cleaner look, but the base is just a chunk of plastic. There's no battery, so the Cloud Cam will remain functional only when plugged in. If you can manage to hide the cable, it's a compact, understated camera that won't draw too much attention. 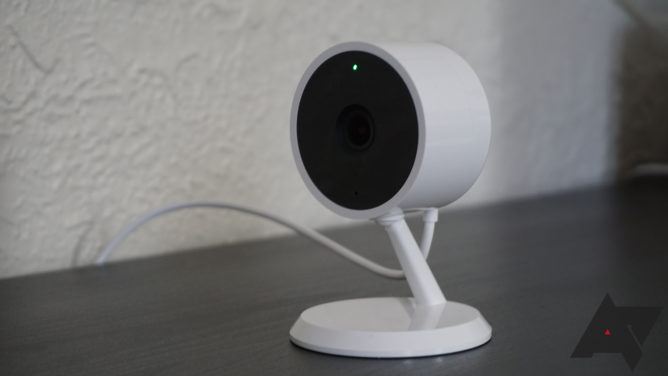 Setting up the Cloud Cam is easy in theory, but I had a few false starts here. The camera enters pairing mode as soon as it's first plugged in, and the app uses Bluetooth to find and configure the device. Maybe that's where my issue was—Bluetooth always does strange things. The camera wasn't detected the first several times I tried to set it up, but I was in business after pulling the plug and re-plugging.

After that, the process was very smooth. The app asks you to set a name for your camera and add a WiFi network. It starts streaming immediately and you're ready to play around with the settings.

Amazon's Cloud Cam has 1080p video with a 120-degree field of view. That's slightly more narrow than cameras from Nest or Arlo, which are around 130-degrees. 120-degrees is fine for most indoor spaces, and I'll give Amazon credit for keeping the edges of the frame mostly free of distortion.

With normal indoor light, the Cloud Cam's video is excellent. It's clear, and there's no artifacting or blurry motion. The brightness seems to be bumped up higher than other cameras, which might be an asset if your room is a bit dim. However, there's no HDR to even out the exposure. As a result, brighter areas of the frame are noticeably blown out.

I've noticed the Cloud Cam tends to switch over to night vision mode when I feel like it should still be able to operate in regular daylight mode. That's not a deal breaker, but the IR-illuminated image is going to be monochrome as opposed to full color. The ring of eight infrared LEDs do a good job of lighting up the room. It should catch anything moving around inside the frame. 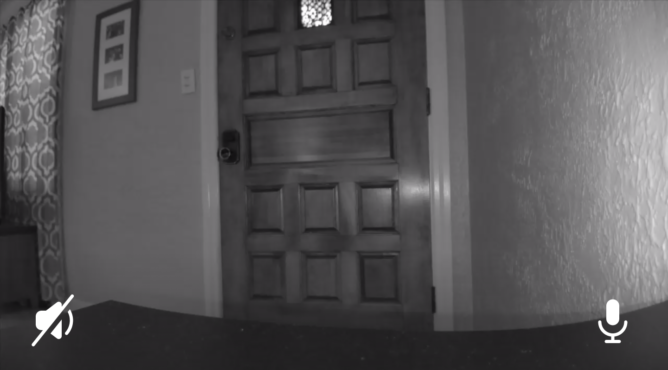 In night vision mode even though it's still noticeably light outside (and inside).

I'm pleasantly surprised by the Cloud Cam's audio quality. This is sometimes an afterthought for camera makers, but the sound coming through the camera's single omnidirectional microphone is crisp. The speaker is also nice and loud with very little lag. It does the job even though it faces backward, just like the Cam IQ's speaker.

By now it should be clear that the Cloud Cam is a capable piece of hardware. It's a similar story with the app—it gets a lot right, but a few features are missing. The Cloud Cam app is just that: the Cloud Cam app. It doesn't connect to any other Amazon devices or services, and the feature set is somewhat barebones. The upshot is the app loads quickly, and the feed is live in about two seconds. That's one of the faster times among wired cameras.

The camera feed loads at the top of the app, and below that you have recent clips. It's nice to have it all on one screen, and you can tap any clip to start it playing immediately—there's really almost no delay. This screen also has options to delete, download, and share the clip. 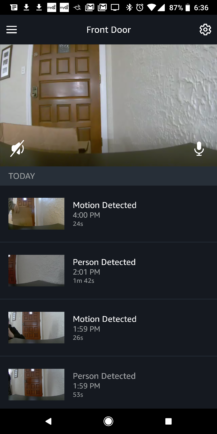 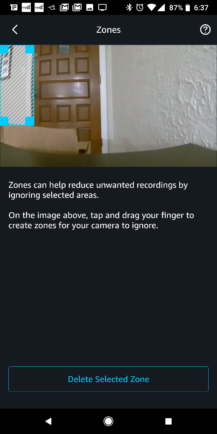 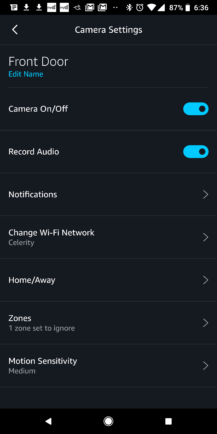 By default, the camera fires off a notification whenever it sees movement, but you can also have it specifically detect people with a premium subscription. The motion detection can be adjusted in the settings, but you can't have notifications muted when you're home. All you get in that department is rate-limiting. With a premium subscription, you can at least create zones in the frame that won't trigger alerts. That's handy if you've got something like a TV in the camera's field of view. The option to turn cameras on and off based on your location is nice to have as well.

Notifications come in quickly, but they don't include much information. All you get is the time of the detection and if it was motion or a person (note: it cannot recognize specific people). There's no screenshot in the notification like you get with some other cameras. There's one major issue here: you're the only one getting these notifications. The Cloud Cam has no support for multi-user access, so the only way to share a camera feed is to let someone else log into your Amazon account. Amazon also lacks a web interface for viewing the camera feed. 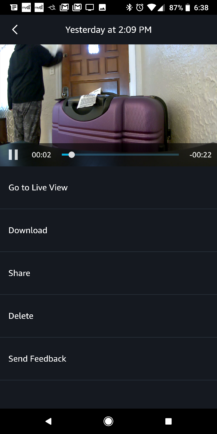 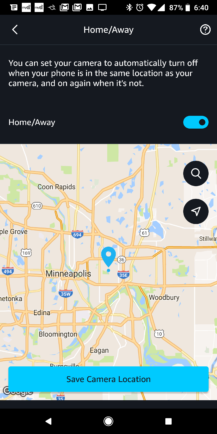 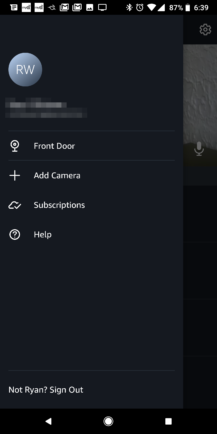 If you're looking for smart home integrations, you'd better hope you're living in Amazon's universe. There's the Key version of the Cloud Cam, of course. That one works with certain smart locks to allow Amazon delivery drivers to open your door and leave your packages. If you have a Fire TV device, you can stream video from the Cloud Cam via Alexa. For that, you just need a phone with the Alexa app or any of the Echo devices. There's no Google Assistant integration because Amazon. It doesn't interact with other services, and there's no IFTTT support.

Amazon stores video for 24 hours on the free account, but the paid plans are priced well. The plans support up to 10 cameras (no individual fees a la Nest), and you get zones and person detection as well. For $6.99, Amazon will save your video for a week. At $9.99 per month you get two weeks. A month of video storage will run you $19.99.

If you need a few security cameras around the house and don't want to break the bank, the Cloud Cam is absolutely the way to go. It offers great bang for the buck, even if there are a few missing features. Although, the lack of multi-user will probably be a deal breaker for some. 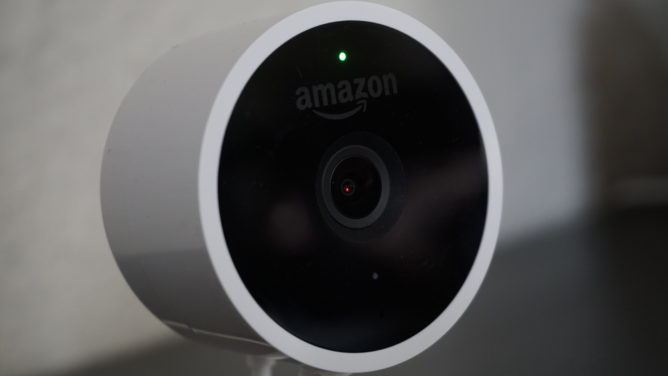 If you want more camera types (like wireless or outdoor), Cloud Cam will only complicate your setup. It's also deeply integrated with Amazon's ecosystem. For those of us with Google Homes and Chromecasts all over the house, it's probably not the ideal device.