The headphone jack is dead, or so we're told by OEMs, but the selection of wired USB Type-C headphones is still woefully inadequate. If you aren't interested in all the problems associated with Bluetooth audio, you're pretty much forced into the donglelife. But Essential just launched two new pairs of USB Type-C powered headphones, including the Earphones HD. Although the HDs aren't bad, for $100 it's tough to recommend them unless you absolutely can't use a dongle.

Initially, we planned on reviewing both of Essential's new headphones: the Earphones Mini and Earphones HD. But, in my own testing, I couldn't find anything good to say about the smaller Earphones Mini. So they've been cut, though I do still make a few comparisons for interested parties. The TL;DR for the Earphones Mini is that they are hollow, tinny, and a poor value even at $50.

Essential's Earphones HD are a different story, though. I wanted to like them, and they have a lot of good features, but there's a constant background hiss that I just can't ignore, and for $100 that's not really OK.

Essential's Earphones HD are a minimally designed set of earbuds. The housing for the drivers appears to be aluminum, with matching material surrounding the USB Type-C jack, the in-line mic/button assembly, and the Y split, the latter featuring a second sliding aluminum ring for an individualized fit. Personally, I've never used those, but it's there if you want it. The cables are sleeved in slightly sticky rubber. They accumulate lint and dust pretty quickly, and the rubber itself seems thin. For the price, I'd really rather have seen them jacketed in a braided fabric like nylon. I might be a bit concerned about longevity given the materials, but the grommets at all the bend-prone areas are beefy.

The in-line mic/button assembly only features a single button, so if you were hoping for hardware volume up or down adjustment, you're out of luck. The button also can't be double-pressed to skip music. All it does is answer calls, pause music, and pull up the Google Assistant. So you can use voice commands to adjust volume or skip tracks, but that's a bit awkward on a crowded train. Personally, I've gotten pretty used to being able to skip tracks and adjust volume silently and without pulling out my phone while I'm out and about, so that's a bit disappointing, especially for $100. 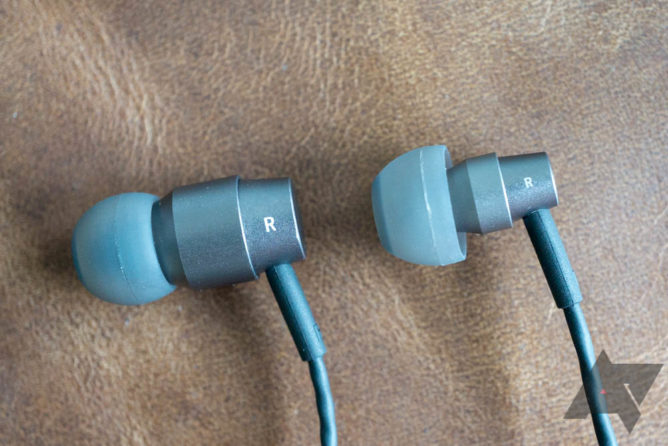 The only visual difference between the Earphones HD and the smaller Earphones Mini is the size and length of the driver housing, with the HD being substantially bigger. That's to be expected, given the larger driver in the HD. Other features between the two appear to be identical. 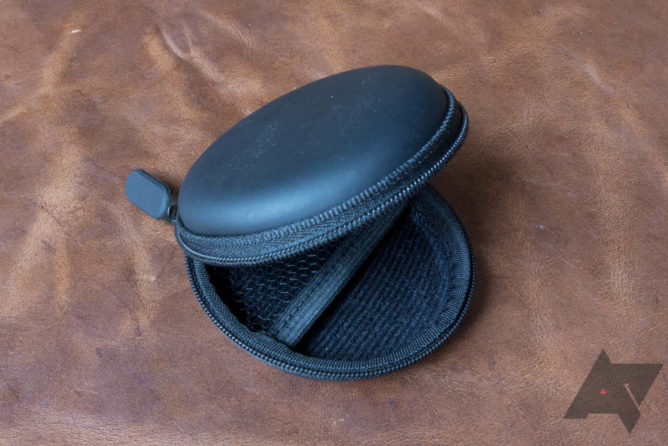 The headphones come with a round pocketed case and three tip sizes for a more customizable fit. The case is a bit slick—it fell out of my coat pockets on more than one occasion—but it is well-made. So long as you select and install the right size rubber tips on the headphones, fit for Essential's earbuds is fine.

The Earphones HD have their benefits, but there are some major drawbacks as well. Bass is quite strong, probably a bit too much for some people. Treble borders on a tiny bit shrill sometimes, but that's forgivable and to be expected in a pair of earbuds. Fit and seal are absolutely required for decent performance, and once you've got them in the right spot, they actually sound pretty great. They have a wide enough sound-stage and get ridiculously loud, pushing quite deeply into ear-damage territory much past 60%.

I do have one significant criticism, though. During audio playback, there's a constant low-level hiss. I spoke to an Essential representative about it and was told that the noise is an unfortunate side-effect of the headphones' extremely low impedance (audiophiles take note). Essential claims its engineers made a choice to include lower-impedance drivers in exchange for louder volumes and a wider sound-stage, and that the hiss is a result of that choice. I'm not entirely sure I buy that explanation, though, since I have other low-impedance headphones that aren't anywhere near as noisy.

It might not bother everyone, but I found the constant hissing quite noticeable in day-to-day use, especially when listening to quieter content like the dialogue in a film or show. For $100, that's not great, especially considering it wasn't a problem I experienced using much cheaper headphones.

Overall, the Earphones HD sound good. I won't be swapping them for my desk-bound Sennheiser HD 600s anytime soon, and I think I still prefer my Xiaomi earbuds when I'm out and about, but Essential's earbuds are OK, especially if you prefer louder volumes and mostly listen to music. However, for $100 I'm still disappointed. You can pair much cheaper earbuds with a USB Type-C to 3.5mm dongle and get far better quality. 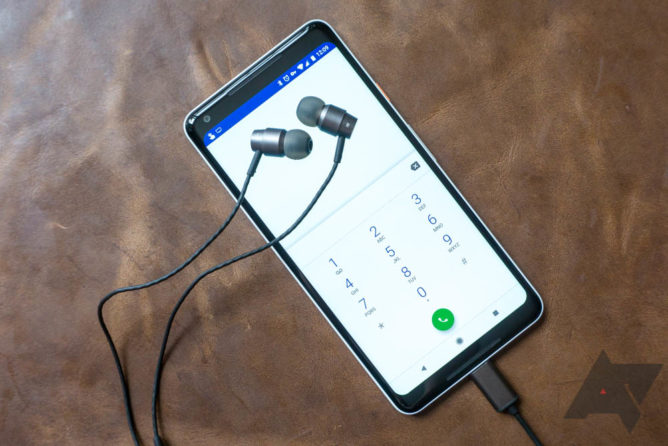 A few people asked me specifically about how the mic performed, so I made sure to place a few HD calls using it. I'm told by callers that the quality is ok, though it was described as "muffled" by some. Most earbuds mics have somewhat mediocre call quality compared to the multi-mic assemblies on modern phones, so that's to be expected. Good enough is good enough, in this case. 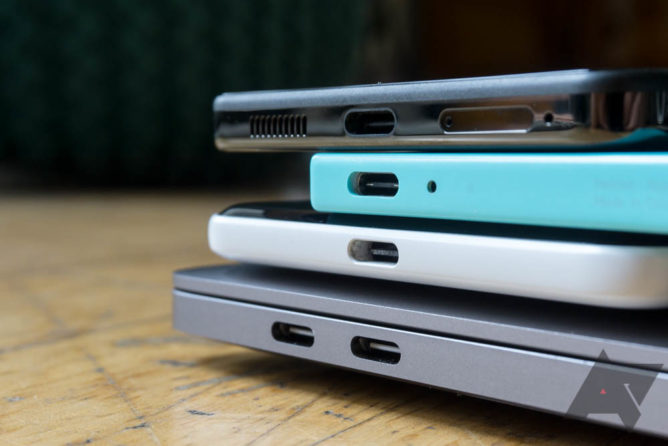 They worked with almost every USB Type-C equipped phone I've got, including the Pixel 2 XL, OG Pixel XL, Essential Phone, and OnePlus 5T, among others. Notably, they didn't play nice with my Nextbit Robin, but since that phone's USB Type-C implementation was incomplete, that's not surprising. But for the most part, whether the device has a headphone jack or not, plug it in and it just works. The only requirement Essential claims the earbuds impose is USB Audio Class 2 support, which pretty much every recent USB Type-C equipped phone, tablet, or computer should have.

I was also able to plug them into my MacBook and get audio, too, after I remembered to change the output device in settings. They even worked almost exactly as you'd expect, though I do have one small warning for those that try it. For whatever reason, if you turn the volume up much past 10% or so, you'll probably burst an eardrum. Volume is a bit inconsistent across devices, so err on the side of caution when plugging them in: take them out of your ears.

The selection of USB Type-C headphones sucks. Hard. If you have absolutely no interest in battery-powered Bluetooth headphones, like me, then you're up a creek. OEMs are taking away our headphone jacks, and we're not really getting much in the way of wired solutions back.

Libratone has a pair of USB Type-C headphones that our own Richard reviewed just a few days back, JBL has the Reflect Aware C (that you can't actually seem to buy anywhere), and Xiaomi has a set as well, but they all have active noise canceling. I live in the city, and I very much prefer that my headphones not cancel out the sounds of traffic, as I live in constant fear of Boston drivers. And apart from some no-name brands on Amazon, Essential's USB Type-C headphones are the only non-noise-canceling game in town.

Other than the constant background static (which probably won't bother most people) the Essential Earphones HD's sound quality is good. At $99, though, they are a poor value for their performance when compared to many cheaper 3.5mm headphone offerings. But, they do have a USB Type-C plug. Since there isn't any other real competition in that specific space, they're probably going to be my personal recommendation for dongle-free Type-C earbuds for a while. At least, until something better comes along. If you're hoping to ditch the dongle, you can pick up a pair at Essential's Shop.

Unfortunately, there are a ton of less expensive 3.5mm earbuds that beat them soundly, so I'm still going to recommend that most people stick to the donglelife, at least for a bit longer. 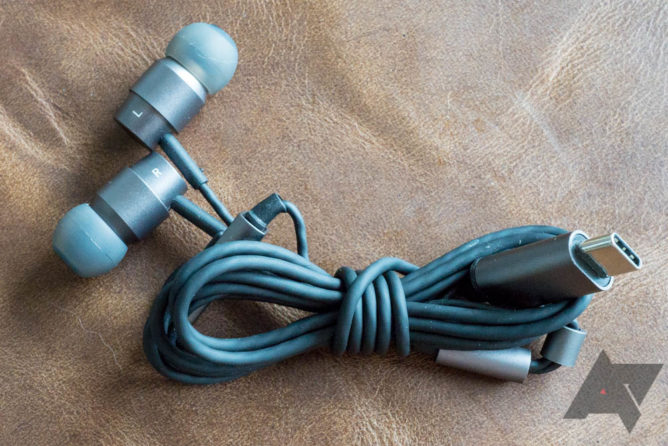