Billions of devices, from phones and tablets to self-driving cars and connected dishwashers, are thirstily awaiting the rise of 5G wireless connectivity, and the big wireless carriers are scrambling to bring these powerful new networks to market. According to documents obtained by Axios, however, AT&T, Verizon, and T-Mobile might be nudged out of the race to 5G—not by an industry competitor, but by the U.S. government.

The National Security Council has circulated a proposal to nationalize the country's 5G wireless capacity into a single network in order to protect U.S. digital infrastructure from foreign security threats and to keep pace with China's rate of wireless network development.

The big wireless carriers would not be entirely left in the dust. If 5G connectivity were nationalized, the carriers would then be able to "rent" access to the network, and then compete over other aspects of their services. Axios reports that the carriers' reactions to the idea have been "mixed," though T-Mobile, being very un-carrier-y, leans more in favor of nationalization due to their desire to see a "level playing field." This assumes that everyone gets charged the same for access, which is by no means guaranteed.

The proposal also weighs the benefits of allowing the carriers to continue with their own 5G rollouts in order to keep from unnecessarily disrupting the existing market, but the concern is that this path would take too long and cost too much. 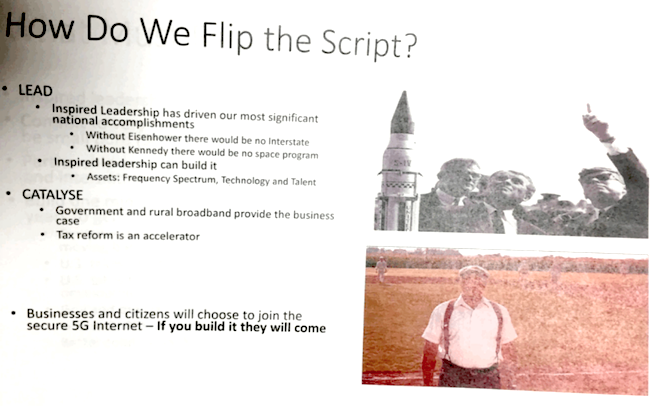 A page scanned from the NSC proposal.

There are a lot of hand-wavy elements to this proposal, which is less a detailed plan-of-action than an informed musing on a big idea ("hey guys, what if we..."). It includes some guesswork about how much all this new infrastructure would cost ($200 billion for fiber? Maybe?), as well as speculation as to how this would be deployed. It posits ideas such as giving early preference to rural communities for an assumed "revenue stream" and new "air and space" layers for remote locations and emergency access.

The impact on consumers is addressed primarily in terms of what 5G enables—what the NSC document is calling the "Massive Internet of Things"—but there's no discussion of what consumers will actually be paying for or how. Three years from now, when you go into a carrier store to buy the Samsung Galaxy S12 Plus Quad-Folding VR Holo-Phone, will you also be paying for a data plan, or will it be just another public utility? (All those VR Holo-Phone selfies will eat up a lot of data.)

There is a fixation on China in the proposal, both as a competitor and as the "dominant malicious actor in the Information Domain," and, tellingly, there is no mention of Russia's incursion during the last election. The document makes the odd claim that "telecommunications manufacturers have all but disappeared," and foresees Chinese companies Huawei and ZTE to be the only manufacturers of radios to avoid a decline in the coming years.

Can this achieve liftoff?

As it says in the proposal, nationalizing American 5G is a "moonshot." It's significant that there's any serious discussion about turning the Information Superhighway (ask your parents) into the National Highway System (ask your grandparents). But just like the highway system, we'd all be relying on the government to keep the network running at peak performance.

It also seems politically infeasible. Republicans would likely revolt over the idea of the nationalization of anything whatsoever, while progressives and Democrats might bristle at the idea of the state having so much more power over Americans' communications than they already do.

And frankly, if the carriers aren't all in favor of nationalization, then it's likely that a majority on the Federal Communications Commission wouldn't be either, and it's the FCC that's calling the shots on wireless spectrum. It's a moonshot that could crash and burn on Ajit Pai's desk.

Here it is, FCC Chairman Ajit Pai's response, and it's not a surprise:

I oppose any proposal for the federal government to build and operate a nationwide 5G network. The main lesson to draw from the wireless sector's development over the past three decades—including American leadership in 4G—is that the market, not government, is best positioned to drive innovation and investment. What government can and should do is to push spectrum into the commercial marketplace and set rules that encourage the private sector to develop and deploy next-generation infrastructure. Any federal effort to construct a nationalized 5G network would be a costly and counterproductive distraction from the policies we need to help the United States win the 5G future.