Google Maps has a new beta peeking out on devices. After a great deal of poking around, the list of changes for the interface is pretty sparse, but as always, there's a ton to discuss from the teardown. There's more from the home screen shortcuts, showtimes with ticket sales, detail fields for food photos, and way more.

If you're looking back through places you've been, the most convenient route is through the 'Your places' screen with the 'Visited' tab. This is a list of all the places Google Maps has detected you to have stayed at for more than a few minutes. In fact, the only way something could appear on the list is if you at least passed somewhere nearby. If the wrong location was identified, it could be corrected manually, but only to other nearby places. That changes with the latest update. 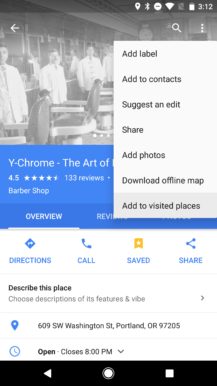 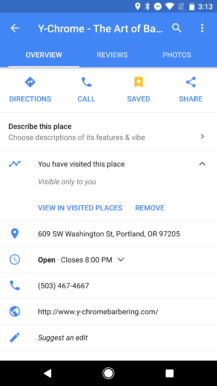 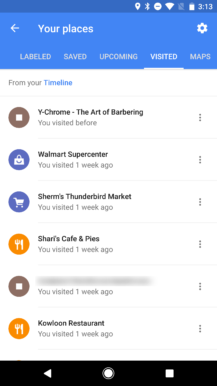 If you open the detail page for a place Google Maps doesn't think you've been, the overflow menu will now contain a new action to add it to your visited places. Upon doing so, a new "you have visited this place" line will appear in the grouping of details just above the address. Tapping to expand the line simply says that the entry is only visible to you and includes buttons to see it in your list of visited places or to remove it. In most cases (shown below), this section would also show when you last visited. 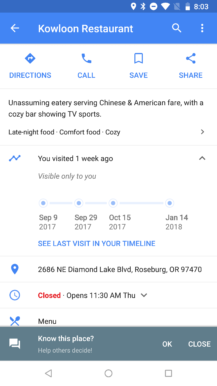 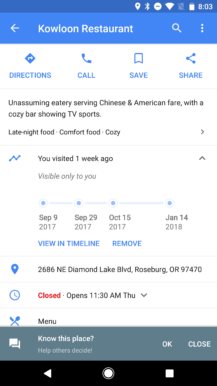 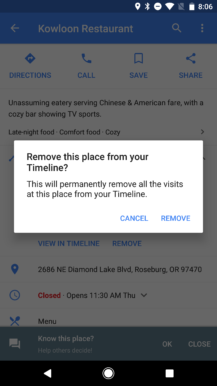 As it turns out, the 'Remove' button is also a new, and it serves a value function. This button allows you to remove all recorded visits to a place from your entire timeline. Many of us live near enough to a business that Google Maps has linked our location to visiting that place. It wasn't practical to fix that entry in every day of our entire history, but now it's possible to completely eradicate that place from the timeline with just a few taps.

Be aware, this doesn't actually eliminate the path that you've traveled from your timeline history, it just unlinks that location as a stop. Sorry, but this won't erase your whereabouts on a particular day from prying eyes.

We've been watching for a few months as the Maps team progressively adds more text for custom shortcuts that will live on the start screen. There are plenty of unknowns, but now there's one thing that makes this feature far more compelling: Custom search.

This one isn't hard to picture. You'll be able to define a search category or define your own keywords, just like you would with the search box. When you hit the shortcut, it will immediately perform that search based on your current location, or perhaps based on the area you're viewing.

There will be a limit of four custom searches, but it's not really clear if that's in addition to other shortcuts, or if there's a total max of four shortcuts and each one will eat a slot that could have belonged to the other.

Your directions (with a Shortcut)

While we're on the subject of shortcuts, it looks like there may be another one lined up. However, this appears to be a dedicated feature that exists on its own, but can also create custom shortcuts.

The feature is called "Your directions." There isn't actually any text to detail what the feature does, but with such a descriptive name, it's pretty obvious that we're looking at a tool for saving the parameters of a trip that can be restored later. The part that is represented in the text is the ability to create shortcuts. They can also be edited, renamed, or deleted.

There has been a long run of teardowns that dig into the topic of restaurant food, spanning from items on the menu to pictures of the food. The latest update includes even more clues that Google is slowly inching towards getting it all tied together.

New lines indicate that Maps will allow users to add details about the photos of food and drinks they've submitted. It will ask for the name of the item, its price, and if the customer would recommend it to others. It looks like there will also be a search function for the name of the item, but I'm not sure if it pulls from a restaurant's menu or perhaps a more general search.

Want to buy tickets for that 9:30 showing of Star Wars? You could hop over to the Fandango app, or maybe it's just easier to grab them if you're already in Google Maps.

There's not enough evidence here to say with any certainty if Google will be selling the tickets directly or if the business model will be more like that of hotels, where Google is acting as a middleman for the booking sites (which are themselves middlemen). Google Search already redirects users to other booking sites, but that doesn't mean Maps can't provide an in-app purchasing experience, even if the transaction is running through another party.

I wouldn't rule out the possibility that this will apply to more than just movie tickets. Stage theaters and other venues may be part of the act.

Transit instructions to include walking and wait times

The Maps team has been progressively tweaking the experience for people hopping on mass transit. The latest addition, which may already be live, is a message that instructs users to walk a certain distance and amount of time, and also informs them of about how much time they'll be waiting to get onto a train, bus, or some other form of conveyance.

The great thing about this message is that it communicates about how much time a user has for detours. In other words, you might see that there's a 10-minute wait at the end of your walk, so you've got time to pick up coffee on the way. Of course, it works the other way if your wait time is going to be really short, you may want to pick up the pace just in case there are unpredictable delays on the way.

If you're reading Android Police, there's a pretty good chance you know how to take a screenshot on your phone. I'd almost wager half of you know more than one way to do it. But for those that don't have a firm grasp on these types of things, sometimes it helps when users can get a little help. Evidently, there may be a built-in screenshot action coming to Maps.

I can't say with certainty that this isn't going to be part of a support tool for reporting bugs or some niche feature, but it looks more like a straightforward tool for snagging a picture of a map to post on a social network or show to a friend.

Google has been predicting parking availability for about a year, but the original implementation suffers from some degree of non-specificity. It lets you know that parking "near" a destination may or may not be good, but doesn't really account for situations where you might have two parking areas right next to each other, but one is always full and the other is usually empty. Maps may be raising the bar yet again. Two new strings will inform users if the parking lot or structure is likely to have spaces available or not.

Not all reviews are equal, and we tend to place different values on what makes a review useful to us. We've seen this phenomenon with reviews on app stores, movies, and probably most notably, Amazon. Some of us want to see the most critical reviews, others want to see the reviews others found helpful, and so on. Google Maps will soon allow users to get a clear view of those reviews in an upcoming search feature.

This is called a search, but it's not entirely clear if you'll actually be able to enter search terms or if this is mostly about sorting the reviews by some criteria. Either way, the sorting options include: Highest score, lowest score, most helpful, and most recent. That should cover all of the situations people are actually interested in seeing. Hopefully this will also include a full search, because I can see a lot of value to being able to search a barber for reviews that mention beards or checking a Japanese restaurant for opinions about its sushi.

Review prompts. We've all seen them before and there's nothing new to say about them, but there are a couple new ones that you can expect to see popping up in the future. One will ask if you would recommend the food, and the other focuses on the service.

<string name="REVIEW_AT_A_PLACE_NOTIFICATION_RECOMMEND_TITLE_DINING_FOOD">Do you recommend the food at %1$s to others?</string>
<string name="REVIEW_AT_A_PLACE_NOTIFICATION_RECOMMEND_TITLE_DINING_SERVICE">Do you recommend the service at %1$s to others?</string> 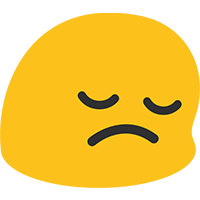 Acer Chrome OS tablet, the first of its kind, shown off at Bett education expo in London