The situation for LG's phones is, at best, a mixed bag. Revenues increased to $2.77 billion, but LG still took the hit of a $192.33 million loss. That wound is less severe than last quarter's $331.37 million loss, which LG attributes to "strong sales of the LG V30 and other premium smartphones and an improved business structure." That improved business structure refers at least in part to LG's surprising announcement earlier this month that they would no longer churn out yearly flagship devices.

Among its explanations for its troubles, LG cites "increasing U.S. trade protectionism" and "strong competition" from Chinese device manufacturers.

However, unit sales are up 2% from the previous quarter (though down 1% from one year ago), to which LG credits "increasing sales of V30 and Google’s new premium OLED phone," referring to Google's Pixel 2 XL which they manufacture.

In a presentation for investors, LG names three devices as its "key products" in mobile: the V30, the Q6, and the X4. The absence of the LG G6 and G6+ is telling, especially considering that, like the Q6, they are both among Amazon's ad-subsidized Prime Exclusive phone selections. But the Gx naming scheme is likely coming to an end, and the company has reportedly scrapped the next generation G7-or-whatever-it's-called that had been in development in favor of some new, unknown design. LG did not break down sales by device model. 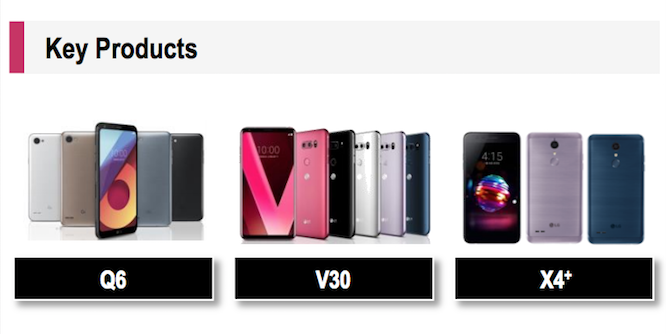 The profitability gains that LG is enjoying came almost entirely from appliances and televisions, with a little bit of help from their Vehicle Components unit. LG Home Entertainment, which manufactures TVs, more than doubled its revenue for the quarter over last year with a 14% increase in sales and what LG says is a high demand for its premium TVs.

As long as LG can continue to be profitable in other areas, it can theoretically continue to manufacture phones at a moderate loss. There's certainly some value to simply "being in the game" of the smartphone industry, even if only as a prestige business that keeps LG's brand in consumers' minds for other electronics purchases. But as AP's David Ruddock recently pointed out, LG is being hopelessly overshadowed by Samsung and Apple, a problem that will only get worse if LG devices become rarer sights in carrier stores. And unless its high-end offerings truly blow people away, all that prestige won't matter much if no one knows those devices exist.

The LG Mobile Communications Company posted full-year sales of KRW 11.67 trillion (USD 10.52 billion) despite a challenging marketplace and strong competition from Chinese brands. Fourth-quarter revenues increased to KRW 3.07 trillion (USD 2.77 billion), while the quarterly operating loss narrowed to KRW 213.2 billion (USD 192.33 million) due to strong sales of the LG V30 and other premium smartphones and an improved business structure.

The LG Vehicle Components Company posted solid full-year sales of KRW 3.49 trillion (USD 3.15 billion), an increase of nearly 26 percent from the previous year, and quarterly sales of KRW 856.7 billion (USD 772.8 million), down slightly from the same period a year earlier. The company’s fourth-quarter 2017 profitability declined due to a temporary decrease in sales in the infotainment business and investments in new business. Growth of the global electric vehicle market is expected to generate additional demand for components in 2018.

LG Electronics’ unaudited quarterly earnings results are based on IFRS (International Financial Reporting Standards) for the three-month period ending December 31, 2017. Amounts in Korean won (KRW) are translated into U.S. dollars (USD) at the average rate of the three-month period of the corresponding quarter — KRW 1,108.51 per USD.

LG Electronics will hold an English language conference call on January 26, 2018 at 09:00 Korea Standard Time (00:00 GMT/UTC). Participants for the English conference call are instructed to call +82 31 810 3061 and enter the passcode 9084#. The corresponding presentation file will be available for download at the LG Electronics website (www.lg.com/global/ir/reports/earning-release.jsp) at approximately 16:00 on January 25, 2018. Visit http://pin.teletogether.com/eng and pre-register with the passcode provided. For those unable to participate, an audio recording of the news conference will be available for a period of 30 days after the conclusion of the call. To access the recording, dial +82 31 931 3100 and enter the passcode 142890# when prompted.

Reolink Argus 2 is a $129.99 outdoor wireless security cam with a rechargeable battery and a ...