It's sad, but the headphone jack is being included on fewer and fewer phones every year. Ever since Apple started the trend of relying on one connector with the iPhone 7, Google, HTC, Motorola, and more companies have all released flagship devices without the 3.5mm jack that all of us knew and loved.

Without the headphone jack, people basically have three options for personal audio: dongles, Bluetooth headphones, and USB-C headphones. Dongles look cheap and out-of-place, they're a pain to move around, and they're easy to lose. Bluetooth headphones can be a pain to pair and must be charged fairly often. So if you don't particularly fancy either of those, you're left with one choice: headphones with a USB Type-C connector. That's where the Libratone Q Adapt USB-C earphones come in. I've been using a pair for several weeks now, and I'm ready to share my thoughts. Here's the short answer: they're good.

The Q Adapt USB-C earphones look a lot more premium than any in-ears that I've used before. The earbuds have somewhat of a floating design, with a silver bar made out of metal seamlessly sitting atop a housing composed of white glossy plastic. Each metal bar features the Libratone bird logo on the outside and the L/R indicator on the inside. The white color is prone to showing dust, which was annoying while taking photos but not really noticeable underneath anything other than a macro lens. As for wear, I have noticed a little nick in the metal on one bud, a deeper scratch in the housing of the other, and some general discoloration in the smaller rubber pieces, but they've held up well overall. If you're more a fan of darker colors, there's a version with black plastic and black metal that you'll probably like. 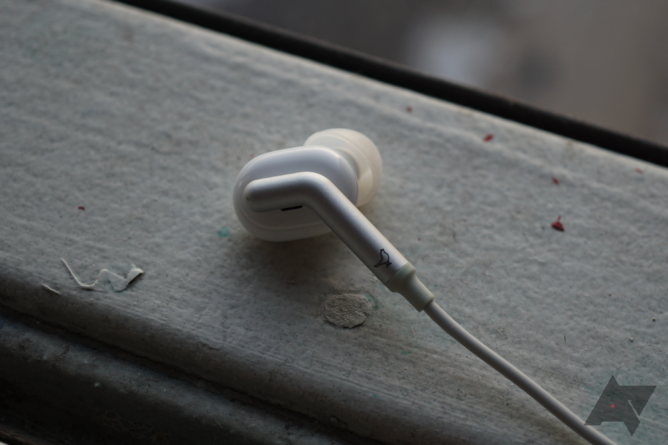 Fit will differ from person to person, but I found it to be solid for me. I used the smallest tips included for the longest time, assuming they would fit the best from past experience, but I ended up actually feeling more comfortable with the next size up. There is a set of wing add-ons included; all you need to do is take the existing tips off, wrap these around the bodies of the earbuds, and put your tips back on. They make the already-stable earbuds stick like glue to your ears, and they even somewhat double as protection for the earbuds themselves. The only real downside to using them is the amount of dust and lint the gel material can attract. 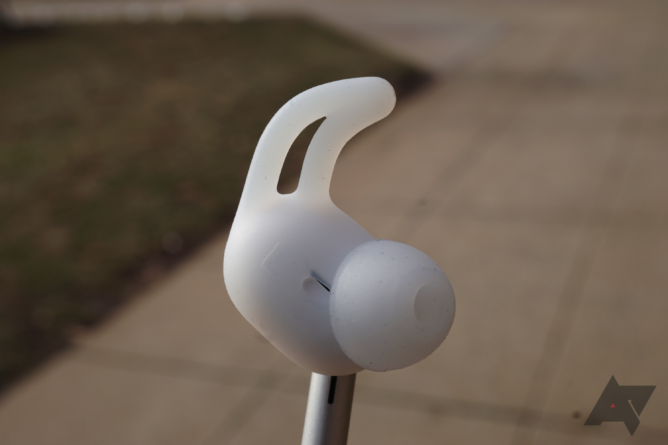 The premium feel continues throughout the rest of the earphones. The wires to each bud meet at the inline control piece; one side has a nice chamfered metal cover with some clean, all-caps "Libratone" text, and on the other is a soft-touch layer with four buttons. From top to bottom, these buttons are for noise cancellation adjustment, volume up, play/pause, and volume down. Holding down the play/pause button launches Google Assistant, which is nothing new (Assistant isn't built-in). They're all relatively easy to get used to even when you're not looking thanks to their different shapes. 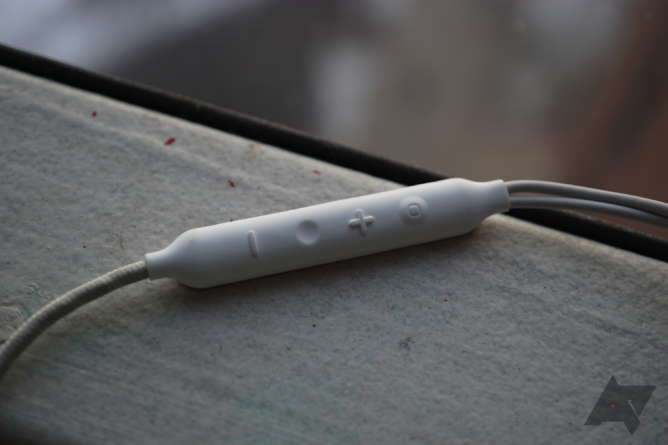 From the inline controls to the USB-C connector, the cable is braided for added durability and, to some degree, style. The connector is shrouded in a nice metal piece that matches the rest of the metal used throughout, and there's a rubber base for extra protection. All of this metal really contributes to a high-end feel, and I don't really see many places for improvement in this arena. As far as I'm concerned, that's a job well done.

As you'd expect from a $149 pair of earphones, the Q Adapts sound good. For the most part, the sound is very natural with clear mids and highs, plus maybe a little bit of extra bass thrown in to make the listening experience more enjoyable. If you want to mess around with the output a little bit, you have some options in the Libratone app that I'll get into shortly. All things considered, this is a balanced set of headphones that won't disappoint. 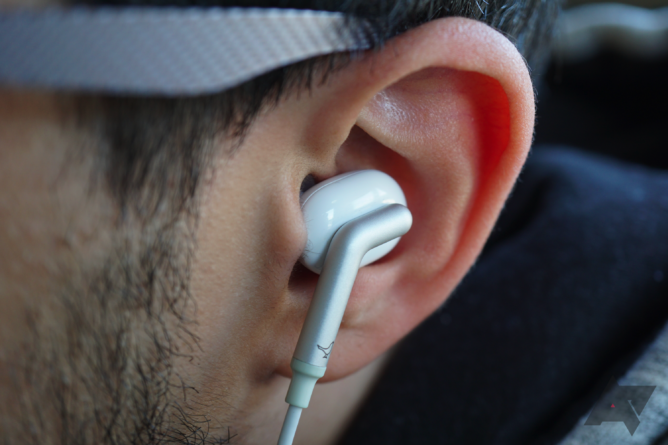 Equally impressive, perhaps even more so, is the CityMix active noise cancellation. It has four levels, and it's controlled either by the top-most button on the inline controls or from within the app. Clicking the button each time takes it up a level, and when you reach level 4, there's a little beep to let you know that you've maxed it out. (Pressing the button again takes you back to level 1, if that wasn't clear.) I'd imagine that most people with these earphones will exclusively use level 4 or level 1, as there's not really much use in kind of blocking sound out. If you want to hear what's in the background, you leave it at level 1. If you don't, you go straight to level 4. 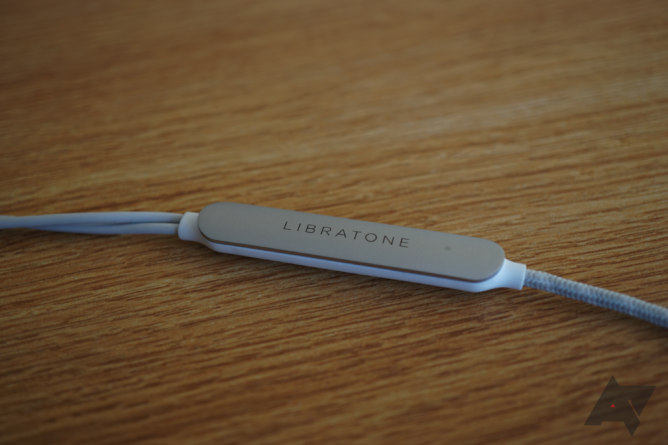 I usually leave the noise cancellation cranked all the way up, since riding noisy buses that are often filled to the brim is a common affair for me. But during the few times that I've switched CityMix from level 4 to level 1 while on the bus, I've been astounded by the sheer amount of background noise that the earphones had been blocking without my knowledge. The sounds of people conversing, the loud engine, and the squeaky brakes all get muted significantly when noise cancellation is on, even though I don't listen to my music particularly loudly. Of course, it's impossible to have everything cancelled out, especially with earbuds, but what Libratone has managed to do here is remarkable.

Libratone offers a companion app in the Play Store, but I didn't use it much. That's primarily because I got sick of the "Allow the app Libratone to access the USB device?" prompt it'd cause to pop up every single time I plugged the earphones in, which somehow still comes up even if you hit the checkbox for "Use by default for this USB device." I'm honestly not sure how this issue hasn't been fixed yet, as it's been a problem for months at this point. I've even installed several updates to no avail. 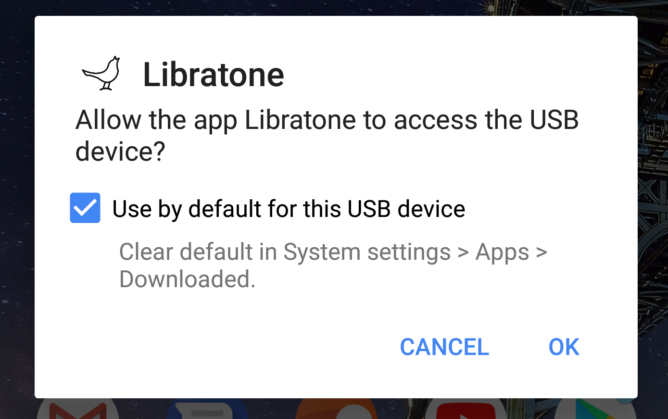 It pops up every single time if you've got the app installed.

Once you're in the app, you're greeted with a "Soundspaces" section up top that has the Libratone devices you've connected, as well as a "My Music" section underneath that with four options: My Collection, Tidal, Spotify, and Internet Radio. It's confusing for a first-time user, but it's not hard to acclimate to. As you might expect, hitting Tidal or Spotify just brings you to the app if you have them installed (or the login page if you don't). I actually found the Internet Radio option pretty interesting, as there's a seemingly endless number of radio stations you can listen to here without the need for a dedicated radio app. I did notice that the audio on some stations would often come to a complete standstill for a few seconds at a time even on a good connection. But at the end of the day, I don't imagine there's much of an overlap between radio listeners and those who are buying USB-C headphones. 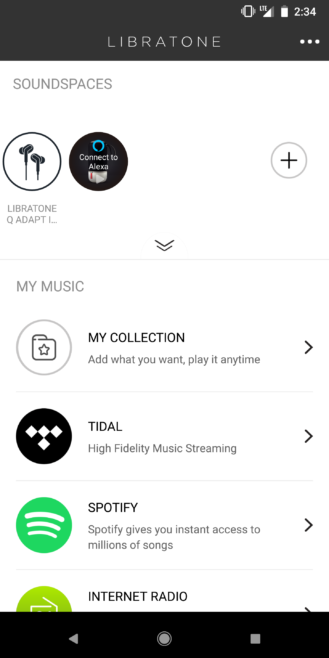 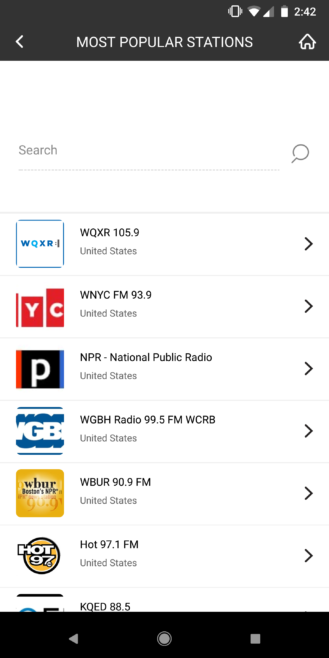 If you tap the icon of your Q Adapt earphones under "Soundspaces," you'll find some much more relevant items. There's a dial that you can use to adjust the noise cancellation's level, as well as a "Hush" button that completely silences everything if you need to hear something around you. Tap the settings icon on the bottom right and you'll be led to the settings page. Front and center is "Voicing," which offers three sound profiles: Neutral (nothing enhanced), Extra Bass (guess what that does), and Enhanced Treble (take another guess). I did notice that the latter two profiles did boost the bass and treble, respectively. It's worth noting that only one profile can be selected at a time. There's also a standby mode, which allows you to control when you want the headset to turn off to conserve power for anywhere between zero and three hours. Since I'm fine with the Neutral profile, don't use the radio stations, and don't need the Hush button, I'm perfectly fine with leaving the app uninstalled. I'd install it occasionally to check for firmware updates, of which there have been a few, but the constant prompts that the app caused were a major pain in the ass. This needs to be fixed.

The Libratone Q Adapt USB-C earphones are very good. The design is unique, the build quality is solid, the sound is clear, and the noise cancellation is incredibly effective. My only legitimate gripes have to do with the app, which you really don't need to have installed. Oh, and of course, there's that $149 price. 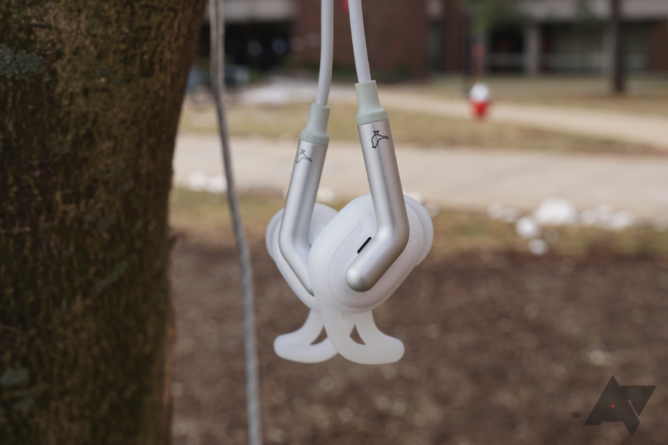 Aside from the $199.99 JBL Reflect Aware C and the $39.99 HTC USonic earphones that come in the boxes of several HTCs (and only work with HTC devices), there really isn't much competition in the USB-C earbud space. If you just want a set of USB-C earbuds and nothing more, we hear Xiaomi might have a set that we'll soon test out. But if you do think you'll need noise cancellation (bear in mind that the pricier Reflect Aware C also has it on board), the Q Adapts are definitely worth your consideration. 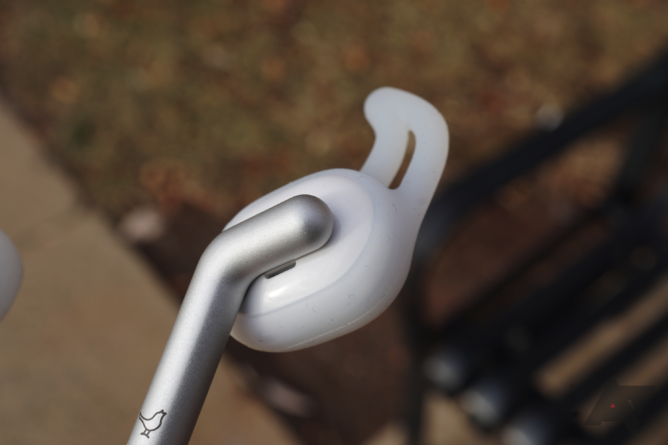 As of publishing time, the Google Store is offering a $30 discount on these, bringing the price down to a more palatable $119.99. That's still a decent chunk of cash, but you get what you pay for. If you have a phone without a headphone jack, often find yourself in loud environments, and are tired of dealing with dongles and Bluetooth, you might just want to give these a shot.

Instagram introduces GIF stickers that you can add to your stories