The first thing you will notice about Flip : Surfing Colors is how beautiful it looks. Its colorful theme and simple yet detailed characters and environments show off LeftRight's knack for design. But as we all know, a great looking game doesn't always equal a fun one. Luckily Flip : Surfing Colors' snowboarding-like gameplay and its interesting use of color matching as a primary mechanic means this isn't just another run-of-the-mill endless runner on Android.

To me, endless runners are pretty much synonymous with mobile gaming at this point. Thanks to their easy controls and overall casual gameplay, they lend themselves quite well to short gaming sessions on touchscreen devices. My main problem with the genre is that there are simply too many games out there that perform in the exact same manner. Ever since Jetpack Joyride and Temple Run became huge breakout successes, their mechanics were copied to no end. So it has become a bit of a chore to trudge through the majority of endless runners as they release thanks to no real variation in their gameplay. 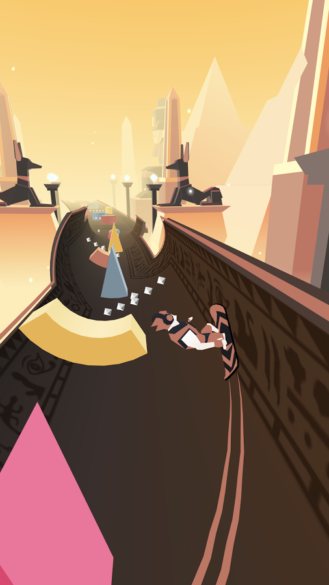 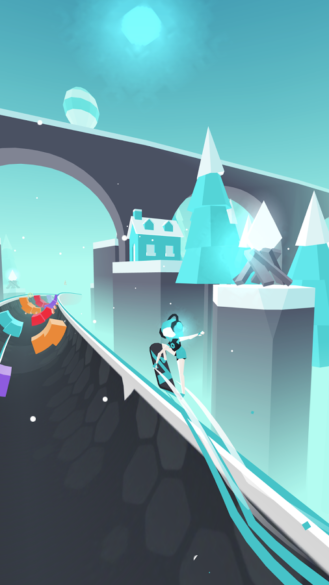 That is why I am so impressed with Flip : Surfing Colors. Sure, you are still collecting coins and gems in order to purchase new characters, boards, and levels, but that is only half of the game. There are also hidden puzzle pieces to collect that are scattered throughout each level, which adds another layer to the game and helps to lengthen its replayability factor. On top of that, you can try your hand at beating a few different objectives, with a max of three on each run. So rest assured, much like Alto's Adventure you will have a lot of various tasks to complete before you can call the game beaten.

Now, the meat of the gameplay is of course filled with auto-running. You start out hangliding your way to the beginning of the first level, and once you land, it is game on. You will notice that your character starts with a blue color and that there are 4 balls grouped together in front of you that can be picked up to change your current hue to something different. This is integral to the gameplay because each stage is filled with obstacles. These obstacles will have a wide range of available colors to them, and it is your job to not only run right into the ones that match your current color but to also avoid every single one that doesn't. A mistaken hit will wear down your hit points, of which you only have three. So you have to be very careful with your movements.

Being careful is much harder than you would think thanks to the game's floaty controls. Personally, I have had little issue with them and find the floatiness part of the overall challenge, though others have complained that they could be a little tighter. For a game that simulates snowboarding-like movement, I find those complaints unfounded.

Sadly not everything about Flip : Surfing Colors is wonderful. This is a free-to-play game after all, and that means you will be grinding for quite a while to even unlock your first new level, character, or board. Honestly, the current pricing could use some rebalancing, but as is, it just seems like an easy way to push people towards the game's many in-app purchases. There are also quite a few areas that contain optional advertisements. This is mainly for continuing after a death, or adding new objectives before you take on your next run. Of course, it would have been nice to see an option to remove these annoyances by paying for a single IAP to unlock the full content of the game, but alas this is not the case. 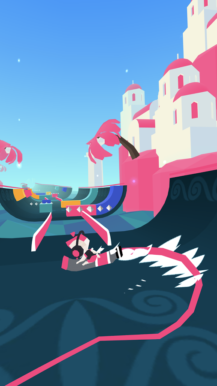 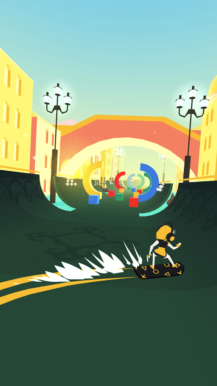 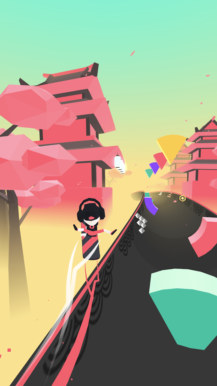 Oh, and if you were hoping for any Google Play Games Services support, I was unable to find any of its features other than an auto Google sign-in. That means there are no leaderboards, no achievements, and most glaring no cloud saving through GPG. Luckily you can sign-in with a Facebook account, which does offer cloud saving that can work across operating systems.

The game's IAPs range up to $29.99 per item. They are mainly used for coin or gem packs, the two available in-game currencies. Coins can be used to purchase a few characters or boards, and gems are used to unlock the rest of the game's items as well as new levels. Gems are of course the more difficult to earn currency, and the only real way to earn it in-game is through completing challenges.

So there you have it. Flip : Surfing Colors is a beautiful endless runner with a few interesting mechanics that are slightly marred by its free-to-play design. I haven't run into any issues that would make me stop playing the game, though a premium experience would have been preferable. Flip : Surfing Colors is still a beta release, so some of these issues may change, though there already seems to be a clear path for the type of monetization currently being used. If you don't mind putting up with a bit of a grind to experience a great looking endless runner that offers a fun challenge and uses a fresh color-based matching mechanic, then I highly suggest installing Flip : Surfing Colors and giving it a try. Qualcomm fined €997 million for anticompetitive practices (again) by the EU