The first Chrome release of 2018 is here! Chrome 64 includes the long-awaited redirect blocking feature, but it's still not enabled by default for some reason. There are a few other minor changes as well, like a white navigation bar and new APIs for developers to use. Without further ado, let's get into it!

The blocker for redirecting ads has actually been delayed to a later Chrome release, see this post for more information. If you still want to turn it on, you can follow the below instructions.

If you frequently use your phone or tablet to browse the web, you've probably noticed how some websites randomly redirect you to a fake virus warning or other similar page. This is due to malicious ads breaking out of their frame, and forcing a redirect of the parent page to wherever they want. These harmful ads have infiltrated virtually every ad network, including Google AdSense/AdX.

Google's solution is to block frames from redirecting the parent page on the browser level. The feature was announced in November 2017, and Chrome 64 was supposed to turn it on by default. Despite the blog post for this release explicitly mentioning it, the feature still doesn't seem to be enabled for everyone. 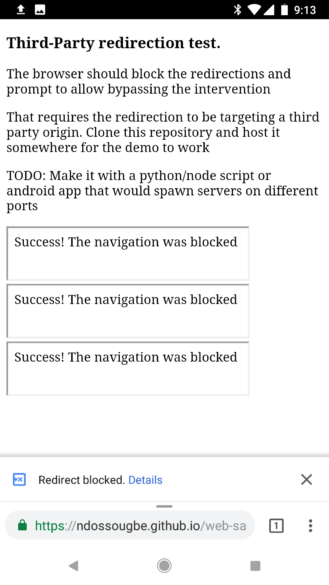 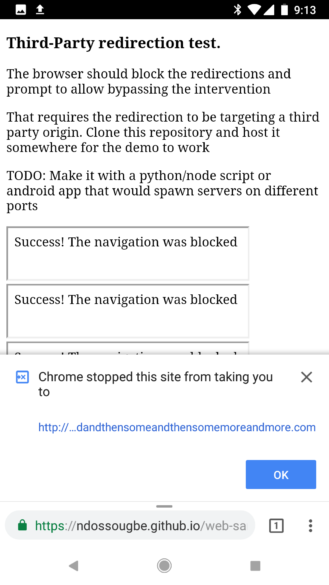 Chrome Dev and Canary already has it enabled by default, so it's possible the wide rollout was pushed to Chrome 65. However, it appears to be fully-functional in Chrome 64, and it's still pretty easy to manually turn it on. Just copy chrome://flags/#enable-framebusting-needs-sameorigin-or-usergesture and paste it in the address bar (you can't tap on that link directly). Then tap the highlighted dropdown menu, change it to 'Enabled,' and restart the browser when asked.

When an embedded frame tries to hijack the parent page, Chrome will automatically block it, and show a small warning at the bottom. You can try a demo here. Hopefully this rolls out to all Chrome 64 users soon, because it's incredibly useful.

Google has been switching some of its apps over to white navigation bars on Android 8.0 Oreo. The idea is to reduce AMOLED image retention by reducing the contrast, but I personally much prefer the old design. 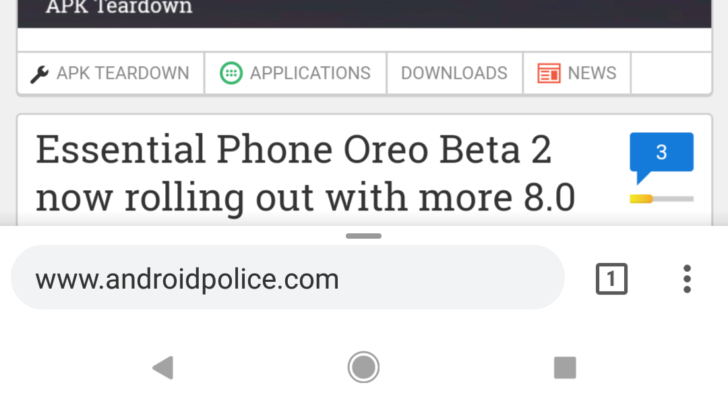 Like it or not, white navigation bars have now reached Chrome. I wish the bar would change color based on the site you're viewing, like how the status bar already does.

Like always, Chrome 64 includes changes for both users and developers. Here are some smaller features that ship with this update.