Allo's small userbase has become somewhat of a joke in the Android community, but the fact of the matter is that there are actually people who use Google's latest messaging service. Crazy, right? If you do use Allo, you might have noticed that your messages have been stuck on "Sending..." with none of them actually being sent. Don't worry; you're not alone. Allo seems to be down for everyone right now. 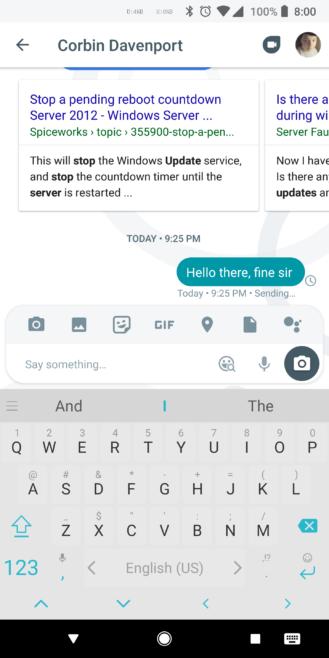 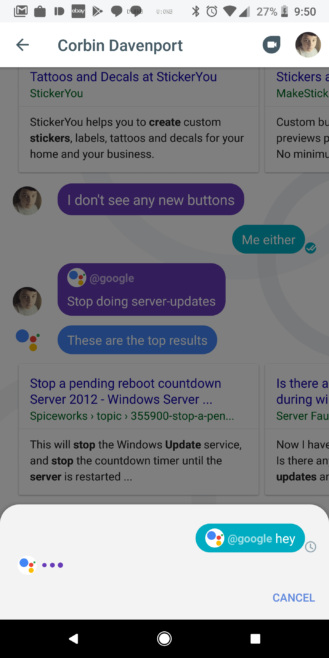 How is Artem to tell Corbin that he is a fine sir?

Both Artem and Corbin, AP's resident Allo users (don't ask me why), have noticed that they are unable to send any messages. Even the built-in Assistant is down, though the last time you talked to it was probably several months ago.

Some #GoogleDuo and #GoogleAllo users are currently experiencing problems. Team is investigating.

We'll let you know when Allo goes back up. In the meantime, let us know if it's working for you by chance in the comments below. Alternatively, you can crack your most well-thought Allo jokes there.

Service has fully returned to normal as of 10:13 PST.

Allo's temporary demise seems to have been short-lived. The service was down for at least 45 minutes or so (we were a few minutes late to report it). But, we're able to confirm that Allo is now back up. The half-dozen of you waiting with bated breath to swap stickers can breathe a collective sigh of relief.

Project Fi gets smart replies via the Android Messages app