A few months ago, I reviewed the Collectors Edition of Anki's popular 'Cozmo' robot. Cozmo was first and foremost a toy, but the app included a 'Code Lab' where owners could create simple block-based programs (Anki has even extended that in subsequent updates).

After that review, Wonder Workshop asked me if I wanted to try out two of its toy robots - the 'Dot' and 'Cue.' Unlike the Cozmo, where coding functionality was more of an afterthought, programming is at the heart of the Dot and Cue. Almost all the activities you can do with these robots involve some level of coding, but they are accessible enough for most kids to get some enjoyment out of them.

More and more parents are trying to introduce programming concepts to their children at a young age, and as such, robot kits like these are becoming increasingly common. So do Dot and Cue deserve the $79 and $199 asking prices, respectively? I think Dot is a great toy for younger kids, but Cue... not so much. 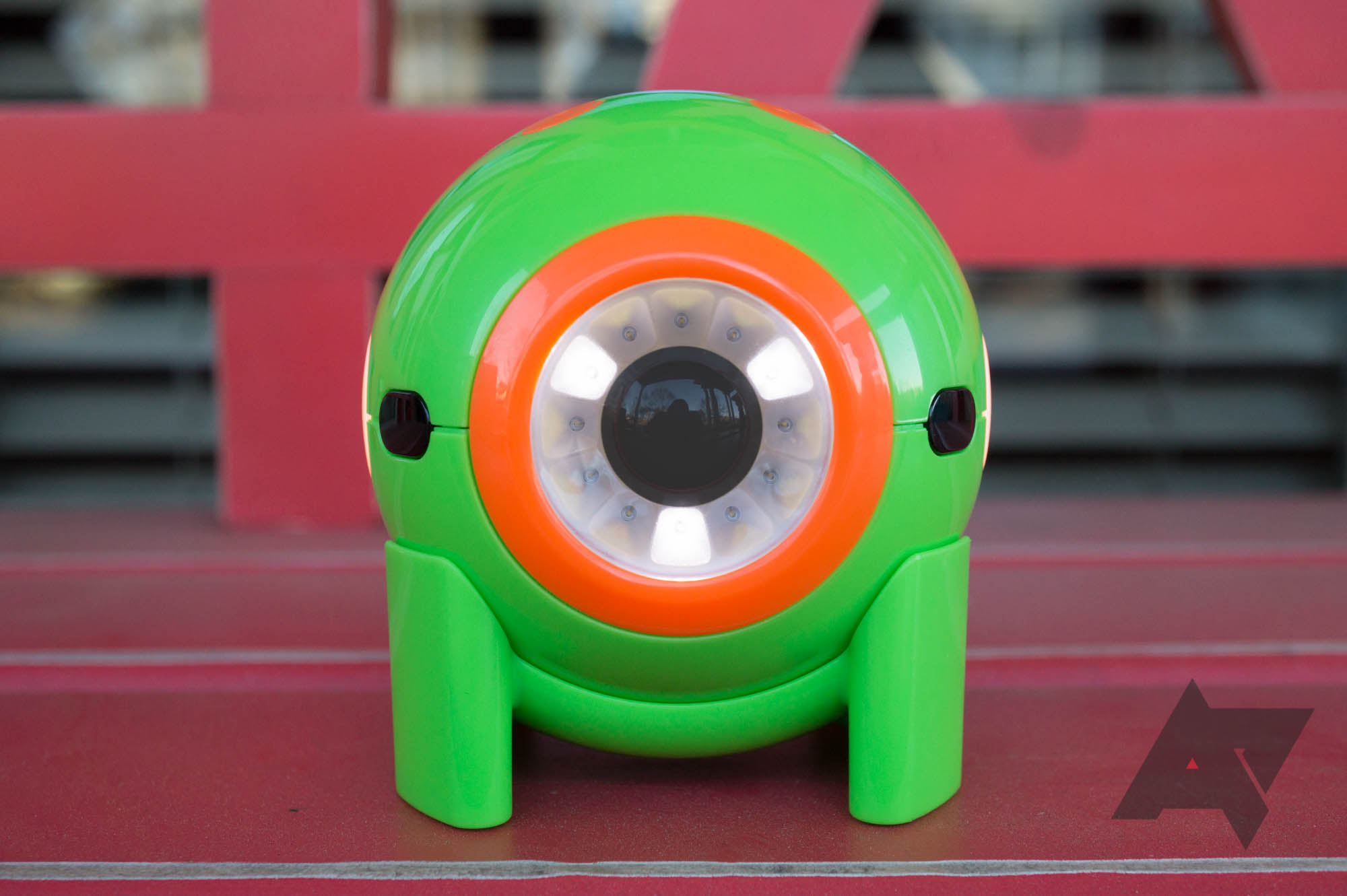 Let's start with 'Dot,' pictured above. It's a green plastic ball, with no motion abilities whatsoever. Dot is designed to be customizable, and it comes with a variety of attachments and costumes. This includes a connector for LEGO-compatible blocks, a basic stand, a "squishy case" that resembles a deep sea creature, a mood lamp, 20 project cards with games and activities, and over 100 stickers. Because stickers make everything more awesome.

On each side of Cue is a connector for accessories and an LED bulb, and on the back is the power button and microUSB port. That means you can charge Dot with any old microUSB cable - nothing to worry about if you (or your children) lose the included cord. On the bottom is another accessory connector, and on the top are four buttons. The front of Dot has a large eye, with a ring of 12 programmable LED lights surrounding the pupil. 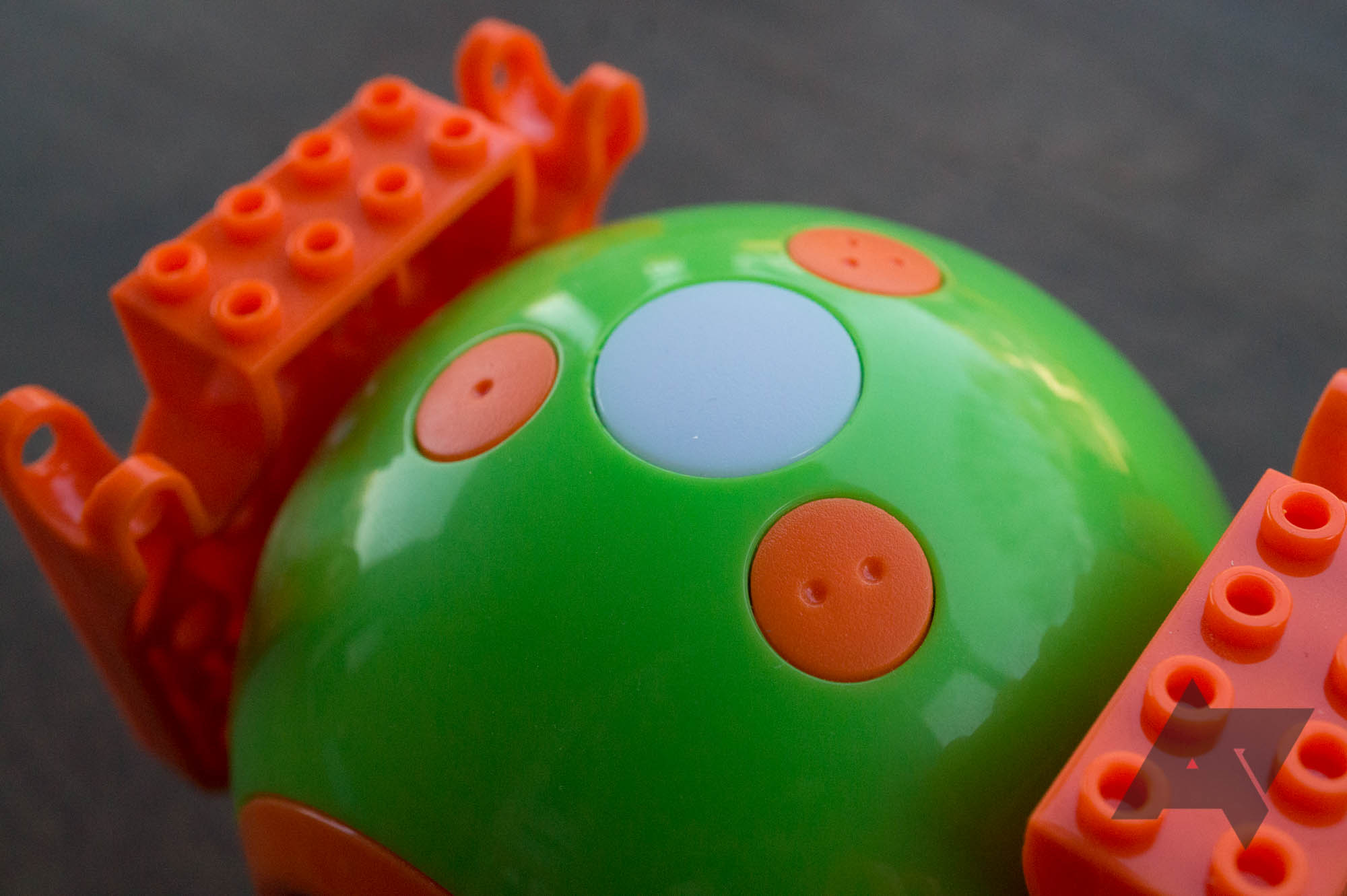 You might think that the Dot would quickly become boring, considering it can't actually move. However, it does have plenty of other functionality. Dot has four buttons on the top, a microphone, a speaker, and an accelerometer. All of these can be used in programs; the speakers and LEDs provide feedback, the buttons and accelerometer can be used as triggers, you can clap to start an action, and so on. Plus, the Dot's lack of wheels means it won't be able to sneak up on you when the inevitable robot uprising occurs. 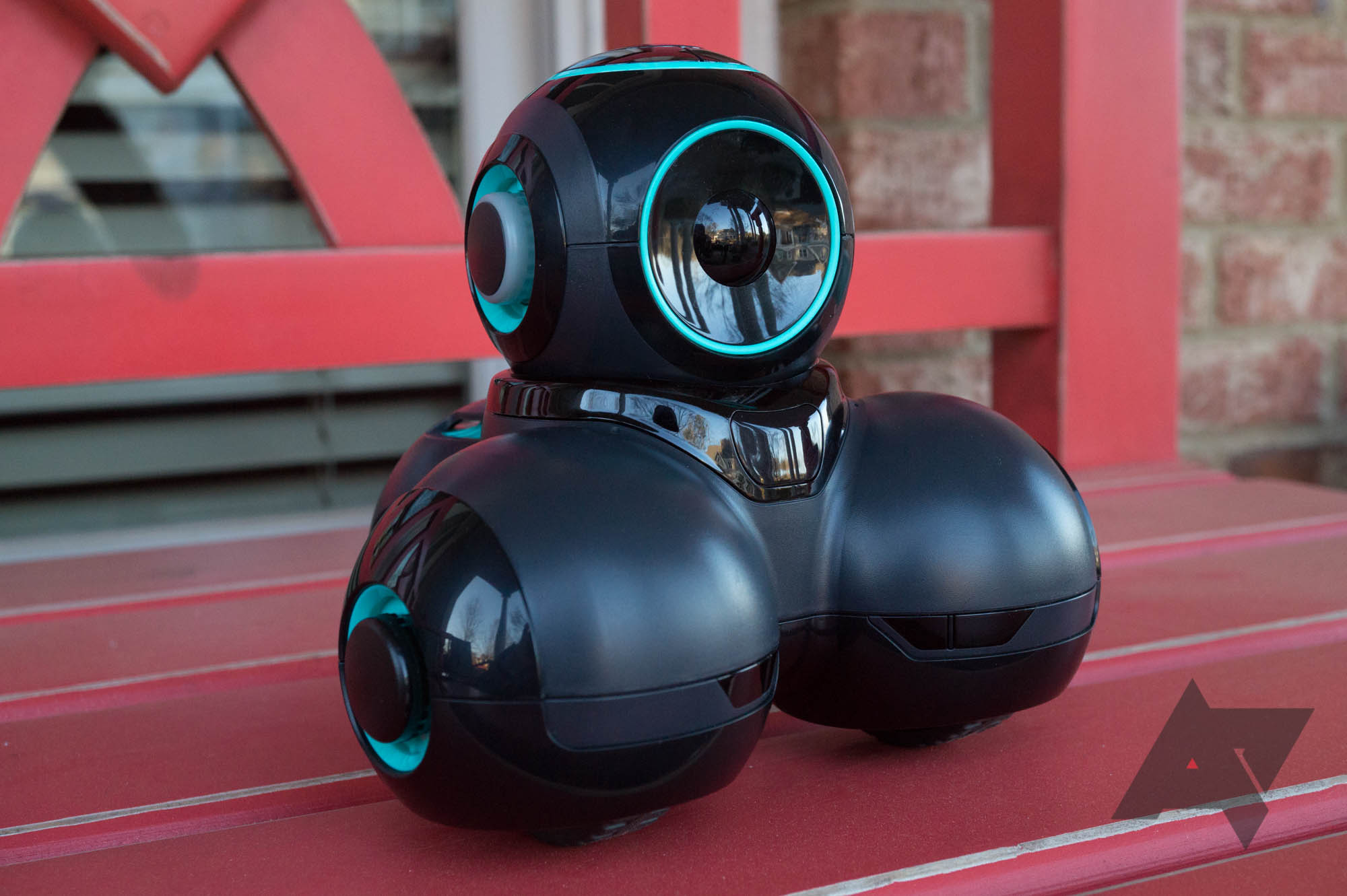 If Dot was a Pokemon, Cue would be the evolved version. It still has Dot's large eye and array of lights and buttons, but adds two motors for moving around a floor. The playful green design is replaced with a black and blue color scheme (or white and green, if you buy the Special Edition). The matte base contains two powered wheels and a third rotating wheel to keep Cue balanced.

As mentioned above, the head contains the same array of LEDs and buttons as Dot. The head can also rotate about 270 degrees, and it can look up or down. The whole robot itself can also drive around, giving Cue several degrees of motion. There's another LED on the front neck area, with a microUSB port on one side and the power button on the other. 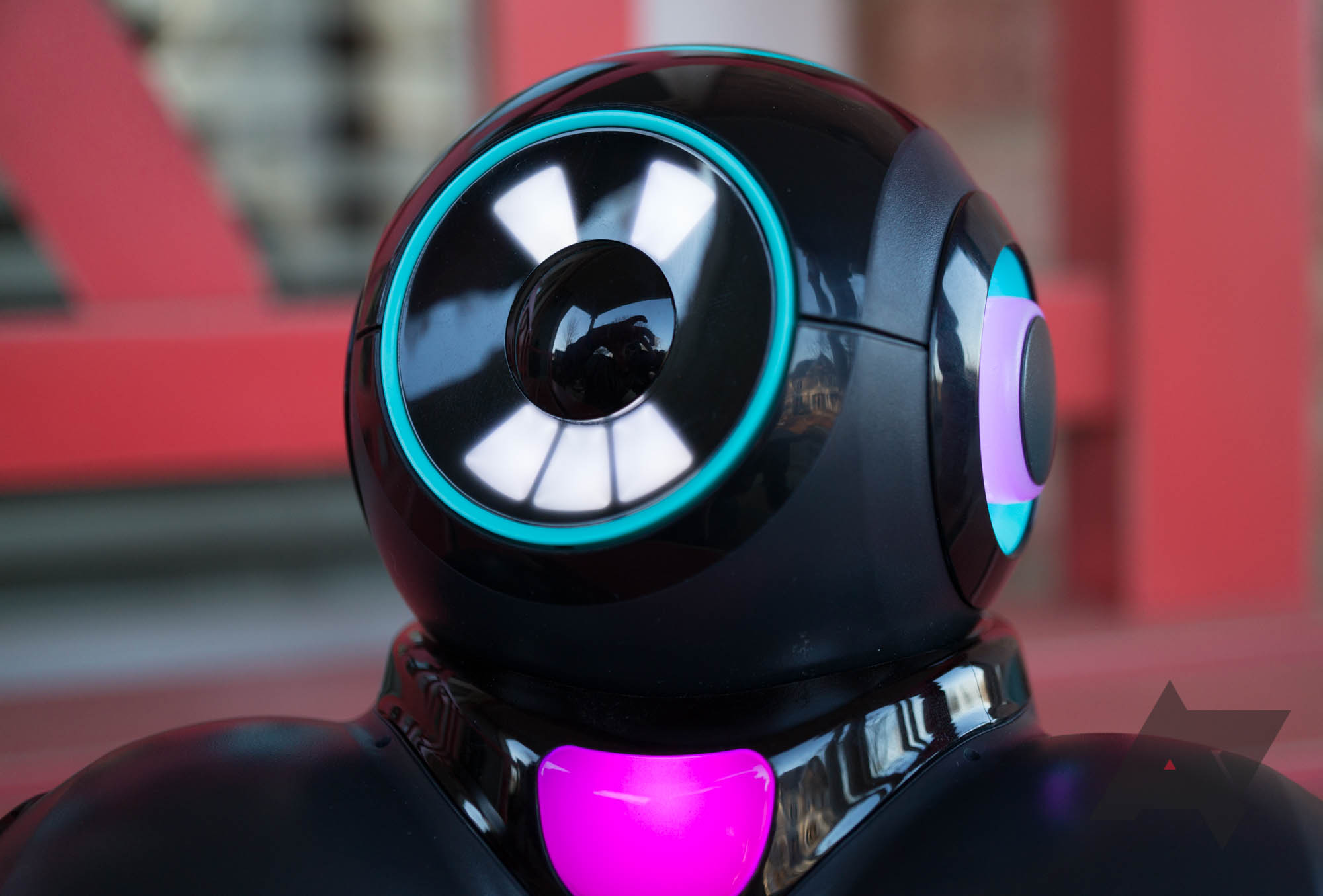 Just like Dot, Cue has plenty of buttons and sensors for use with coding projects. There are four buttons at the top, an array of IR receivers and transmitters on the front, three proximity sensors, an accelerometer, a gyroscope, wheel encoders, and three microphones. There's also a speaker for audio feedback. 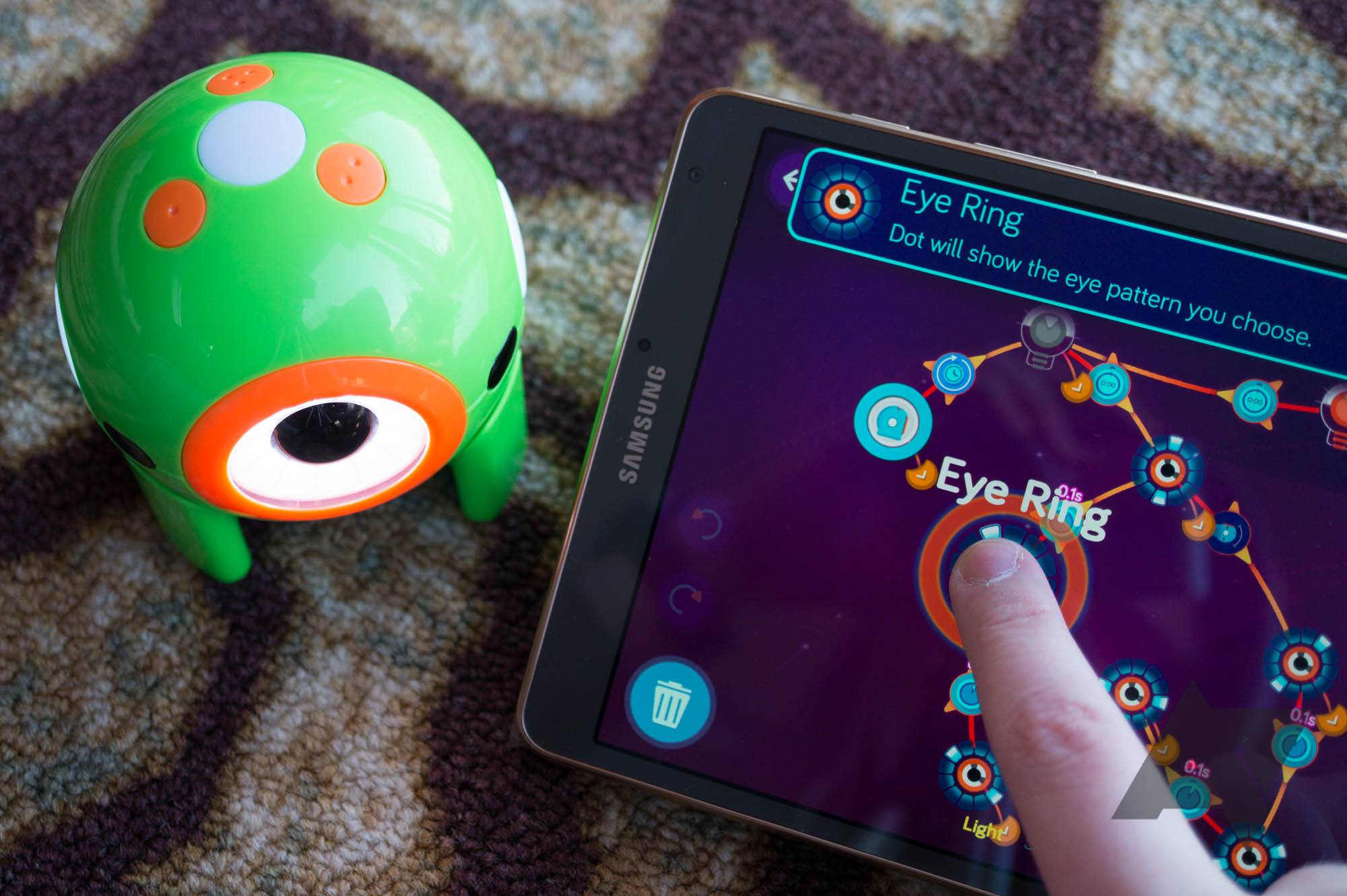 The main app for Dot is called 'Wonder for Dash & Dot', which you can get from Google Play, the Apple App Store, or the Amazon App Store. This is the one most kids will probably want to use with Dot, since it's structured like a game. The main menu has a few different options - Inventor's Log, Wonder Cloud, Controller, Scroll Quest, and Free Play. 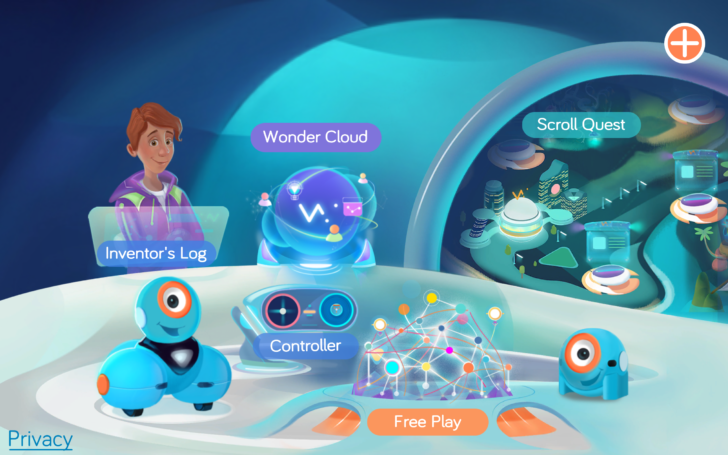 Scroll Quest is the main attraction of the app. It's where you travel through different areas and complete series of challenges, by creating basic programs. For example, in the 'Firefly Lagoon' area, you have to program Dot to act like a firefly. This is accomplished by replicating flapping motions with the eye LEDs, picking Dot up off the ground (it uses the accelerometer to sense motion), and making Dot play different sounds.

The challenges start off easy, but become harder as you progress through Scroll Quest. I'm honestly not sure if an eight-year-old could figure out some of them (8 is the recommended minimum age for the Wonder app), but there's a help button that provides instructions for whatever the next step is. To make things easier, the interface usually only shows the functions required to complete the mission, so kids won't be overwhelmed by every possible feature. 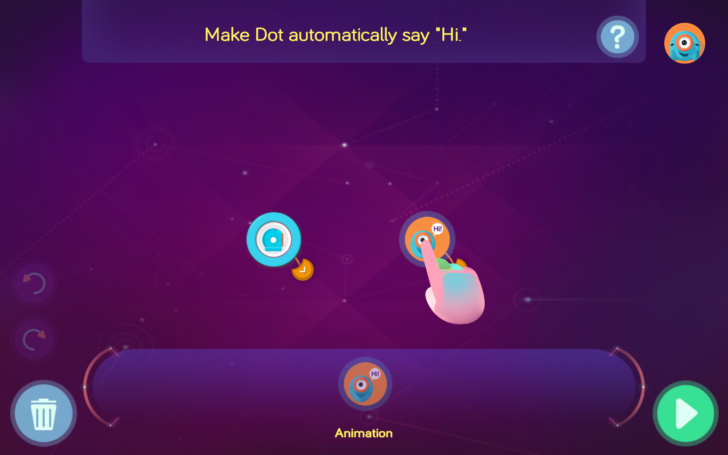 The programming interface in the Wonder app is somewhat unique. Actions are displayed as circles (similar to blocks in Scratch and other visual programming languages), and the user has to connect the circles to form a program. You can move the circles around after connecting them to give yourself more space, and tap on the lines to change how the program progresses. For example, you can make the program wait for a button press just by tapping on where you want the program to pause and selecting the button press action. 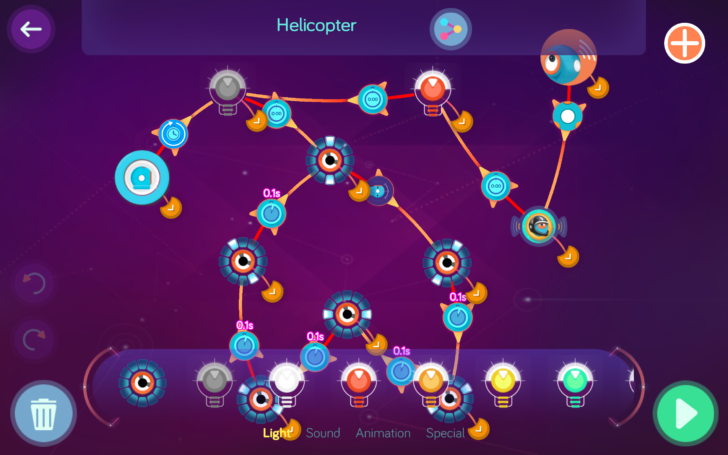 It's definitely an intuitive way to teach kids the basics of programming, and the connect-the-dots interface makes it easy to figure out loops and other complex tasks. As mentioned above, if the user ever gets stuck, the help button guides them through the required steps.

The 'Free Play' mode allows you to create and save your own programs, and you can even share programs with others. 'Wonder Cloud' is where you can download curated programs from other users, and 'Controller' allows you to directly manipulate Dot (change the light colors, play sounds, etc.).

Overall, I really don't have any complaints with the Dot's app. It's well-designed, simple to navigate, and allows children to complete pre-defined missions in Scroll Quest and let them go wild in Free Play. There is a fair amount of hand-holding, which will definitely keep younger kids from becoming frustrated, but children over the age of 11 or 12 will probably become bored. That's where Cue comes in.

The app for Cue is quite different than the one for Dot. First off, it's available on the Play Store, Apple App Store, and Amazon App Store. Once you open the app and set up an account, you get to choose what avatar to give Cue. You can pick between 'Charge,' 'Zest,' 'Pep', and 'Smirk.' These won't impact what you can do with Cue - it just changes what voice lines the robot uses. 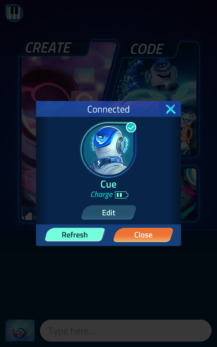 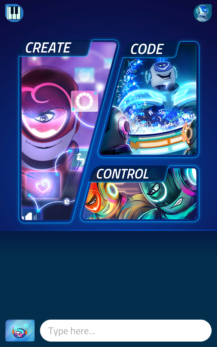 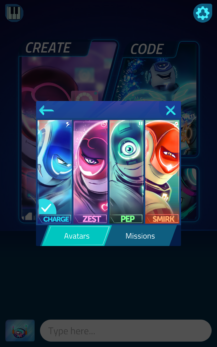 The main screen has a few options. 'Create' is where you can write custom programs for Cue, in much the same way as you can for Dot. 'Code' has a series of missions you need to complete by creating programs, just like Dot's 'Scroll Quest.' Finally, 'Control' lets you drive Cue around like a remote-control car. 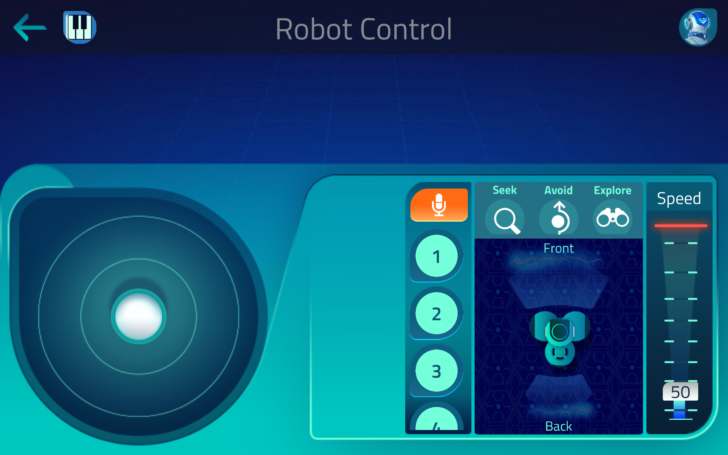 The more I played with Cue, the more I realized it wasn't as refined as Dot. First off, the programming interface in 'Create' is completely different from the one in 'Code.' When you're writing your own programs, you are given a UI very similar to the one used in Dot's app. You can drag actions anywhere on the screen, and you connect them to other actions to form a program. But in the 'Code' mode, you have to make programs with something closely resembling Scratch. 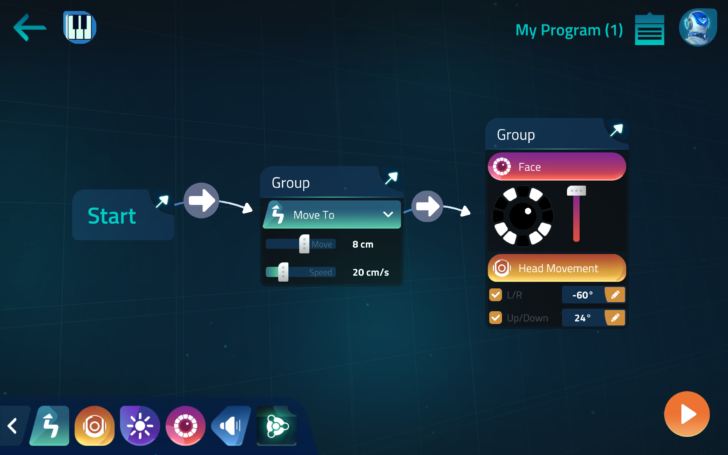 The interface in 'Create' 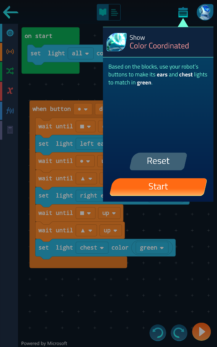 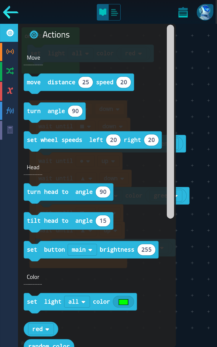 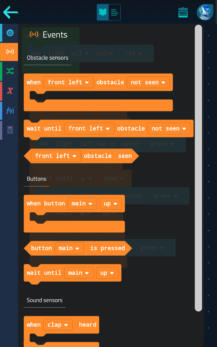 The interface in 'Code'

You can still make your own programs with the block editor, by going to 'Code' and tapping the 'My Programs' tab. I'm not sure why Wonder didn't use the same interface for both modes, or at least give the 'My Programs' tab its own slot on the main menu. The block editor also seemed to lag quite a bit - opening the panels and dragging blocks around was slow and jittery.

Another strange aspect of the app is the chat functionality. You can talk to Cue using the messaging box at the bottom of the screen, and use commands like "sing a song," "tell me a joke," move forward 30," and "show me your colors." That in itself isn't necessarily strange, but Wonder is selling "mission packs" for $2.99 each inside the app. 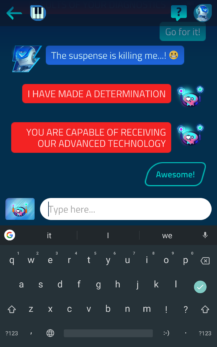 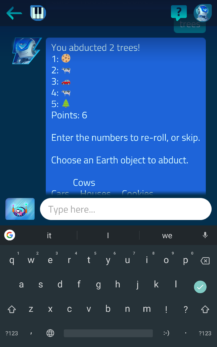 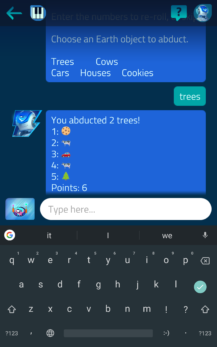 The missions only involve conversations and text-based games inside the chat interface. Who wants to pay $2.99 for what are essentially chat bot games, after paying $200 for the robot? I don't really get it. 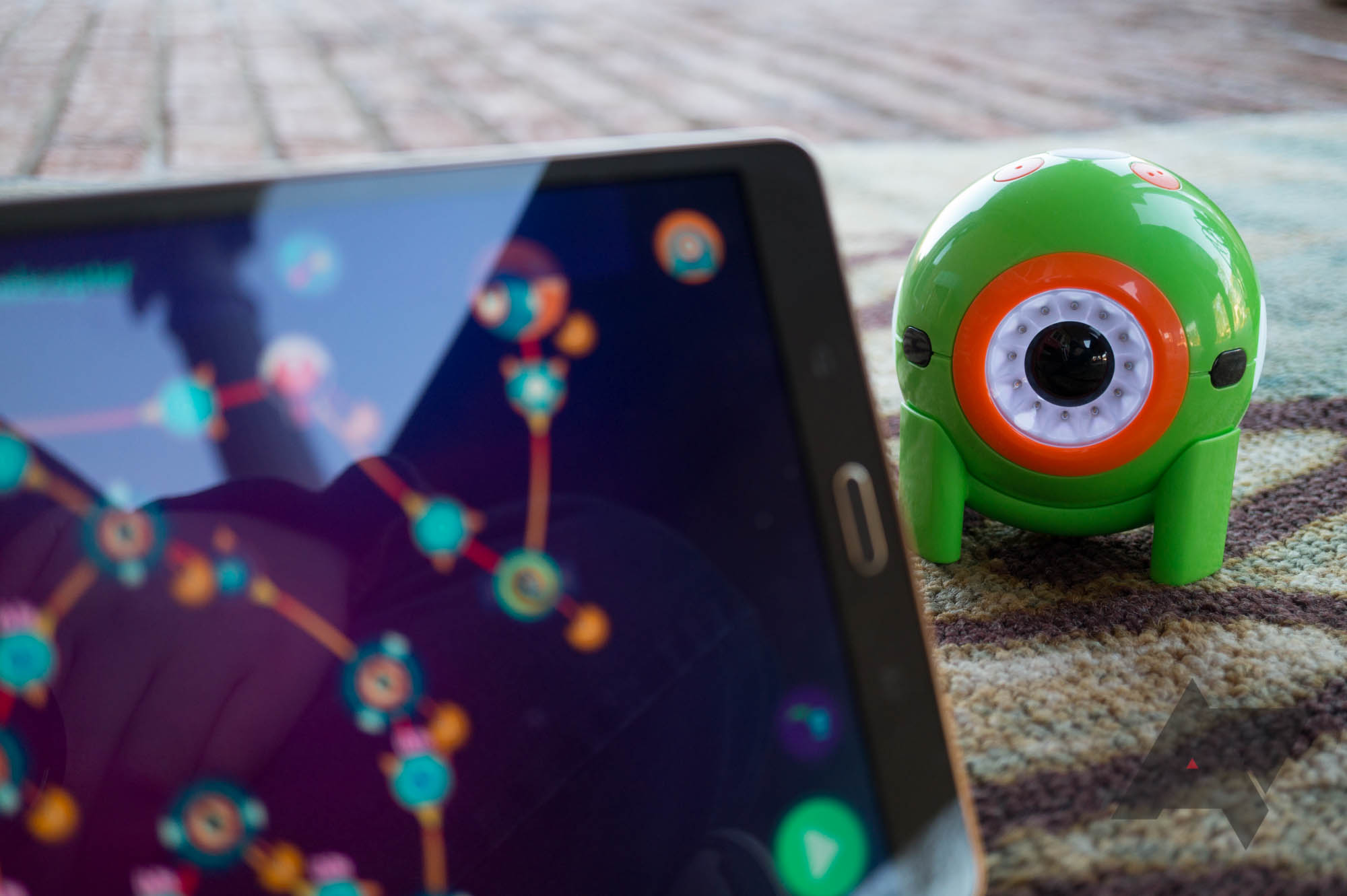 Wonder Workshop's Cue and Dot robots are interesting products, and trying to teach children the basics of programming while keeping them engaged is no easy task. Cue and Dot both try to solve this problem, with Dot targeting children aged 6-10, and Cue aiming at kids 11 and up.

I think for $80, Dot is a good product. The main 'Wonder' app has hours of missions to complete, and kids can easily make and share their own programs. When they become bored of that, there's also the Blockly (a Scratch-like code editor) and Go (a simplified version of the Wonder app for younger kids) apps to try out. And as mentioned above, the Dot kit comes with even more activities. $80 might seem like a lot for a round plastic Bluetooth-enabled eye, but there's quite a bit of value included, and it even drops to $50-55 occasionally. 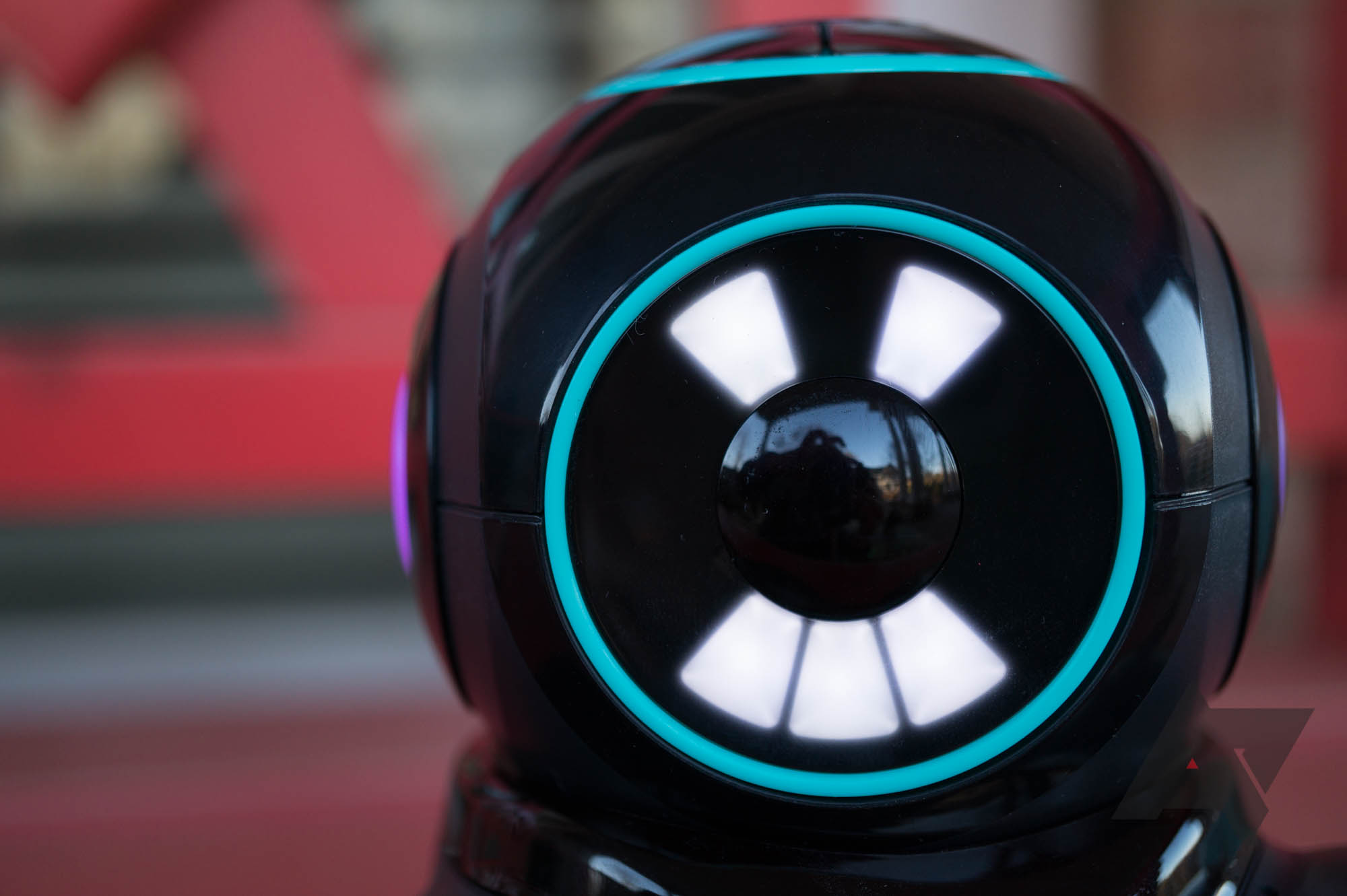 On the other hand, I'm not sure I can recommend Cue. At $199 (though it's $150 on Amazon right now), it offers plenty of functionality, but the app isn't nearly as polished or intuitive as Dot's. There are two completely different code editors, one of which is buggy and slow, and there are in-app purchases. The IAPs are in no way required to fully take advantage of Cue's functionality, but it still bugs me that they are included.

One disadvantage that both robots share is a complete dependence on the app. Dot does absolutely nothing without the app open, and Cue just rolls around a bit. Your phone/tablet doesn't need an internet connection for the app to work, but it is worth noting.

If you're looking for a gift for a 6-10 year-old, I think they'll get some enjoyment out of Dot, and maybe learn some problem-solving skills in the process. For older kids, you should look elsewhere.