Amazon partnered with Huawei a year ago to launch the Mate 9 as the first Alexa-enabled phone, but there have only been a few since then. Simply installing the Alexa app on your other devices didn't get you Alexa voice commands. Well, until now. Amazon says an update is rolling out that adds Alexa to the Alexa app. Seems fitting.

Previously, the Alexa app was basically just a way to control your Alexa devices and access certain bits of data like shopping lists. You could shout "ALEXA!" at your phone all day, and it wouldn't do squat. There have been Alexa commands in the Amazon shopping app for a while, but it makes a lot more sense to just put it in the Alexa app. Most people don't even know Alexa is hiding in the main Amazon app.

When the update is live, you'll be able to access Alexa skills, control music playback, send messages, and more. Your phone won't be able to do hotword detection outside the app, but saying "Alexa" with the app open should work. This update is not live yet, but Amazon says it will be available on all devices in the coming days. Keep an eye out for the new version in the Play Store. And yes, you can also get it in the Amazon Appstore.

A commenter provided this screen of the updated app. It's v1.24.3555.0. There's a big Alexa button in the nav bar to start voice commands. There's no Alexa hotword support, even when the app is open. 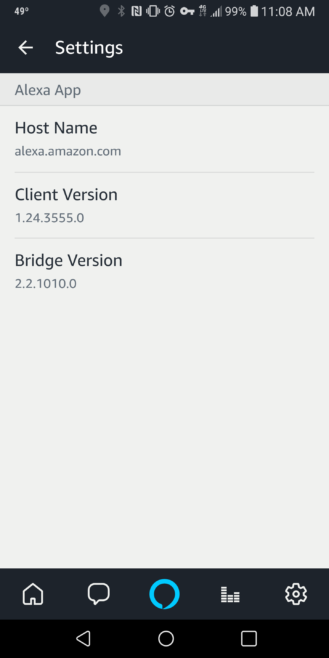 Google's Linux workstations are switching from Ubuntu to Debian