World of Warships Blitz is billed as a free-to-play mobile action MMO. It is from Wargaming World, the publisher of the hit mobile World War 2 military tank shooter World of Tanks Blitz. The Blitz line of Android games are of course smaller scale mobile-friendly versions of Wargaming's range of free-to-play PC games.

Three days ago the official World of Warships Blitz Facebook account posted that the game would be available to all Android users on the 18th. While today may not be the 18th, it's clear that it is indeed available right now for anyone to download off of the Google Play Store.

The gameplay revolves around controlling your very own naval warship in player versus player or cooperative battles. There is even a campaign mode that allows for battles inspired by historical naval events. These modes should provide a plethora of content for the player to explore that can be easily jumped in and out of at their leisure.

You can expect a ton of different ships that are upgradeable by decking them out with a wide range of consumables, supplies, equipment, and boosters. Of course, you can always purchase premium ships with some in-game currency if you don't enjoy the default options available to you.

As a free-to-play game, there are two types of in-game currencies included in the title, Gold and Silver. Gold is what you need to purchase the majority of items in the game including the ubiquitous loot crates, and it can be bought in bundles through a few of the available in-app purchases. While there are no timers, energy bars, or dwindling fuel systems used as a way to force these IAPs, there is still no doubt that this is a free-to-play game. Considering that the IAPs range as high as $99.99 per item, this is something you will want to stay conscious of if you plan on playing long term. 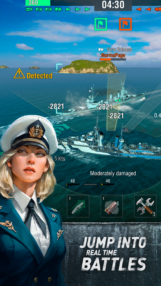 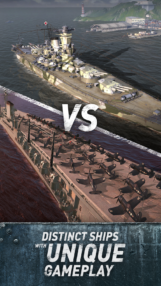 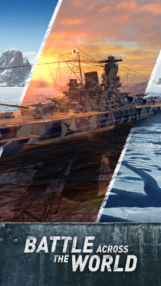 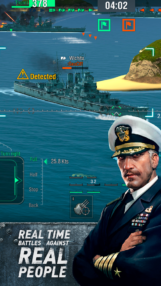 Without a doubt World of Warships Blitz is another great addition to Wargaming's mobile lineup on Android. Reviews are still mixed thanks to the many IAPs, loot boxes, and slow progression, but any fan of Wargaming's titles should find little to complain about since these criticisms are all par for the course. So yeah, if you have been hankering for a free-to-play naval PvP and co-op battle game on your phone or tablet, it looks like Wargaming has answered your prayers with the official release of World of Warships Blitz.

January 18, 2017 — Leave fantasy and first-person shooters behind and sail for uncharted waters with World of Warships Blitz! Wargaming Mobile’s latest free-to-play action game is available today on both the Apple App Store and Google Play Store. Mobile gamers can try their hand at tactical naval combat that combines teamwork, tactics, and skill to rule the seas in an action-packed PvP online shooter.

World of Warships Blitz takes the realistic vehicles and epic naval experience of its PC counterpart and combines them with smaller teams and maps so that every 7 vs 7 encounter is bursting with instant, rapid-fire action. Forge a path of destruction with the legendary battleship USS North Carolina, outwit foes with the USS Iowa, take the helm of an Imperial Japanese Navy Kongo-Class battlecruiser and lead your team to victory—anywhere, anytime—on the bus, hanging out at home, or trapped in another boring meeting.

Download the game for free on the App Store and Google Play.

To learn more about World of Warships Blitz, visit the official website:

About World of Warships Blitz

World of Warships Blitz is a free-to-play mobile action MMO that plunges players into intense naval combat. Enjoy limitless gameplay possibilities by battling in over 90 iconic ships, with four distinct ship classes, all of which can be customized with an array of equipment. Battle all over the world in a wide range of strategically designed maps inspired by real-world locations in the Atlantic, Pacific, and Arctic oceans.

The 7 vs 7 battles are perfectly optimized for the mobile platform, allowing players to experience the speed and stealth of destroyers, endurance and firepower of battleships, maneuverability and agility of cruisers, or the tactical and multi-tasking challenge of aircraft carriers. World of Warships Blitz takes the mobile military shooter into new, uncharted waters. Engage in fierce naval warfare like never before! Take the helm, crush the enemy, and dominate the oceans.

Wargaming Mobile is a division of Wargaming focused on mobile game development and publishing that was established in June 2017. Wargaming Mobile functions as a proving ground for innovative and outstanding mobile projects, which include both internally developed games and external titles from its new third-party publishing program. With headquarters in Nicosia, Cyprus, it has six studios in Helsinki, Copenhagen, Berlin, Moscow, Minsk, and St. Petersburg.

Taking a page from Kindle, Amazon’s Alexa is everywhere—can Google's Assistant catch up?