We just saw a leaked photo of the Moto E5 yesterday, but apparently that wasn't all there is to leak. Droid Life has posted renders and details on six phones: the Moto G6, the Moto G6 Plus, the Moto G6 Play, the Moto X5, the Moto Z3, and the Moto Z3 Play. All of them follow the trend of a higher screen-to-body ratio with an 18:9 display.

Before we dive in, it's worth noting that this information was unable to be verified by a second source, though it is known that the G-series models presented here (G6, G6 Plus, G6 Play) do exist according to @evleaks. The branding on the images looks a little odd, with different fonts and colors used in the pictures, but the phones themselves look to be fairly legitimate. 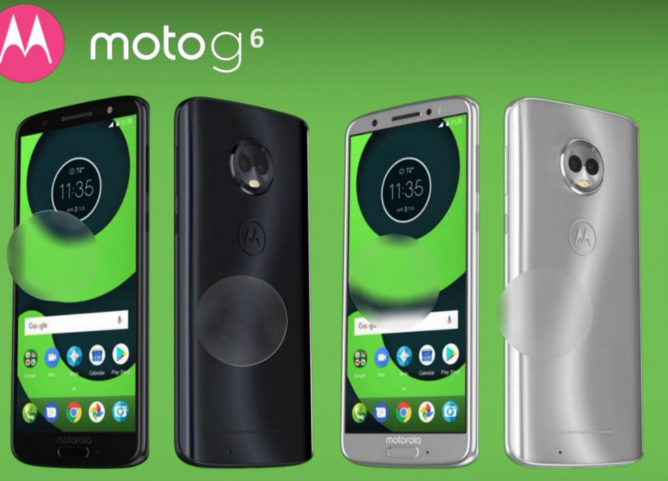 Let's start off with the standard G6. On the outside, you can immediately see several differences between last year's G5S. The screen is taller, the fingerprint sensor has been made narrower, and the logo has been relocated from below the earpiece to above the fingerprint sensor. It makes for an awkward, cramped look, but Motorola probably just wanted to get their name in anywhere they could. You may also note that the logo now says "motorola," whereas the G5S simply said "moto." Out back, the G5S Plus gets a curved 3D glass panel much like those on Galaxy phones from the S7 forward, and you can see a pair of cameras on the circular camera bump. The traditional Motorola "dimple" doesn't seem to be here, though the logo is still where it usually is.

Whereas all previous G-series phones have had 16:9 displays, it seems like 2018 is the year that they make the jump to 18:9. The Moto G6 will reportedly get a 5.7" 1080p unit, which seems large for the standard model, but 18:9 displays somewhat inflate screen size measurements. Performance will come from the Snapdragon 450 (up from the G5S's S430) and 3GB or 4GB of RAM. The 3GB variant will get 32GB of storage, while the 4GB model will have 64GB. Camera-wise, the G6 has a 12MP + 5MP combo on the back, as well as a 16MP front-facing shooter with flash. We weren't impressed with the G5S Plus's dual 13MP sensors, so hopefully this setup proves more competent. A 3,000mAh battery rounds out the specs.

The G6 will be available in black, silver, and rose gold (not their official names) for around $240. Droid Life didn't have any launch details, but believes an MWC unveiling is likely. 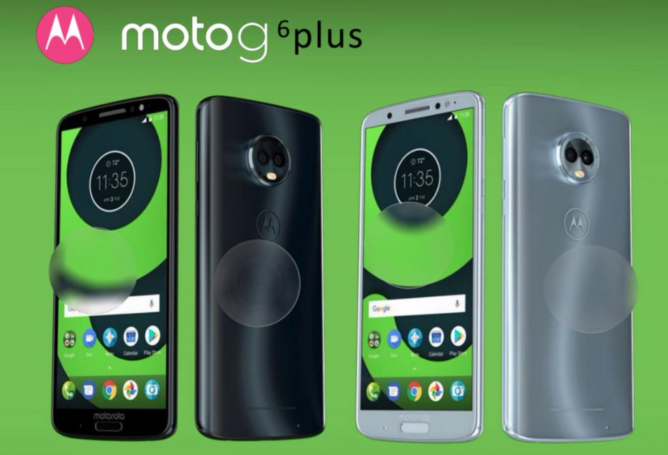 As you might expect, the G6 Plus follows the same formula as the G6, but with a larger screen and more powerful internals. The exterior characteristics are basically the same, so we won't go over those again. The display is a 5.93" 1080p unit with the now-typical 18:9 aspect ratio, and it uses the Snapdragon 630 processor, the upgraded version of the 625 in last year's G5S Plus. Interestingly, three RAM options are mentioned: 3GB, 4GB, and a whopping 6GB. This many variants seems a little implausible, especially given the 6GB figure and the fact that only two storage options (32GB and 64GB) are listed, but hey, this wouldn't be the first time Motorola's done something strange.

Like the G6, the G6 Plus is also slated to have a 12MP + 5MP setup on the rear, though the spec table given specifically lists a 1.4μm pixel size for the Plus model. That being said, the front will almost certainly have the same 16MP sensor with flash. All this will be powered by a 3,200mAh battery, which isn't anything special.

We actually do have the official color names for the G6 Plus: Deep Indigo (black), Nimbus (silver), and Dark Lake (dark teal). Expect it to come in at around $330, and again, DL thinks it may be launched at MWC. 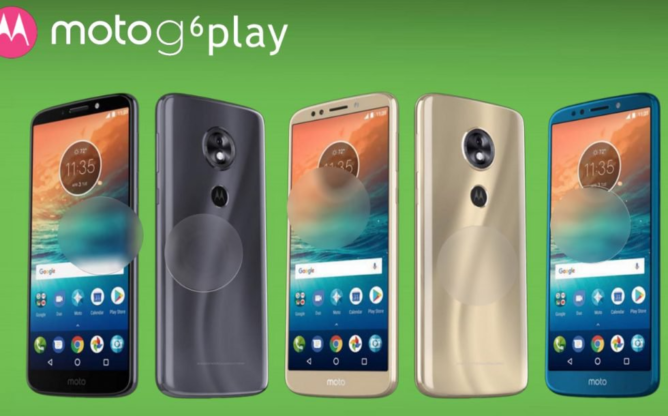 There wasn't a Play model for the Moto G5, but Motorola will apparently be bringing it back this year. The Moto G6 Play differs slightly in cosmetics from the G6 and G6 Plus, mainly due to the repositioning of the fingerprint sensor to the back. The renders portray a rear-mounted circular fingerprint sensor with the Motorola logo on top, which is basically exactly the same as what we saw on the E5. Interestingly, the logo on the bottom bezel that remains says "moto" instead of "motorola" like the G6 and G6 Plus, though nothing's final. Personally, I much prefer the look of the G6 Play to the crammed bottom bezel of its siblings.

Unfortunately, we don't know as much about the Play as we do about the other members of the G6 family. It's rumored to have a 5.7" 720p display, again in 18:9, as well as a large 4,000mAh battery (which Play phones are known for). We also don't know how much it's going to cost, though it should come in under the G6's $230. It'll come in a dark charcoal, gold, and a deep blue that reminds me a lot of Best Buy's exclusive blue. 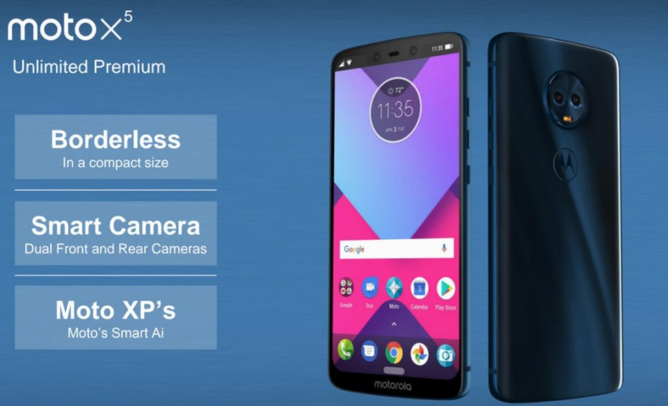 The Moto X name returned last year with the Moto X4. It seems a little early for a successor to be rolling around, but hey, we don't make the rules. It's also worth noting that the grammar in this image is quite lackluster, with phrases like "Unlimited Premium," "Moto XP's," and "Moto's Smart Ai" on the side. But back to the phone itself. It has relatively small bezels all around, with "motorola" on the bottom and an iPhone X-esque notch on the top. Nestled within the notch are two front-facing cameras and a hilariously small earpiece. According to this image, the cell and Wi-Fi signal will be to the left of the notch, while the time and battery indicator will be on the right. The back features 3D glass, a dual camera setup, and a logo with no dimple.

We unfortunately don't have many specs on the X5. It'll supposedly have a 5.9" 1080p display with an 18:9 aspect ratio, but that's essentially the only figure known. However, there is a translucent software button where the navigation bar usually is that is likely there to replace the swipe navigation that newer Motorola phones with front-mounted fingerprint sensors have. A normal three-button navigation bar is likely, though we really don't know if there will be one. More interestingly, we don't see a fingerprint sensor anywhere. It's possible that Motorola wants to pull an Apple and remove it altogether, instead opting for facial recognition, but an in-screen sensor wouldn't be implausible. We also don't know what "Moto XP" or "Moto's Smart Ai" means.

No information was given on colors or price, though the dark blue pictured is quite nice. Given how the X4 was only released a few months ago, don't be surprised if you don't see an announcement anytime soon. 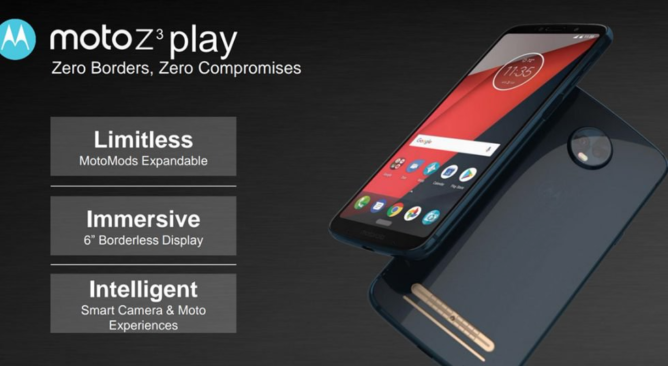 Lenovorola made a big splash with the first-gen Moto Z and its 5.2mm-thin frame, but there wasn't a standard Moto Z2 - only Play and Force models. That's apparently changing with the Z3, which will apparently come in three models (though only details on two were given). Like the X5, both pictured variants of the Z3 have tiny bezels, "motorola" text up front, and no fingerprint sensors (update: It looks like the fingerprint sensor may be built into the power button). But while the X5 (and Z3 Play) appear to have flat screens, the Z3's seems curved, à la Galaxy S8. It's worth noting that the general rear design of both phones is the same as the original Moto Z's, since Motorola promised that Moto Mods would be compatible for three years. While we can't see the Z3's rear, the Z3 Play looks like it has a glass back, with a bit of metal on the bottom.

As with the X5, the only real figure we have for these phones is the screen sizes. The information that Droid Life reviewed indicates a 6.0" 1080p 18:9 display in both phones. Plus, there's believed to be a third Z3-family device with a higher-res display and a Snapdragon 845 (perhaps a new Force model?). The same translucent button is present here, likely for swipe navigation. 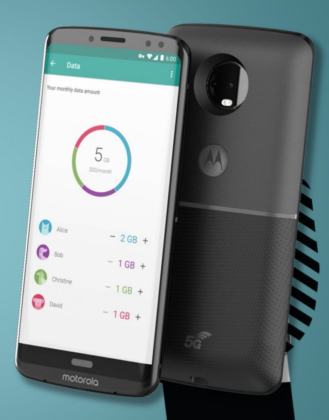 Interestingly, a 5G Moto Mod is pictured atop the standard Z3. No information on this was given aside from the picture, but its existence is a little puzzling. Motorola has mentioned something like this before, but this image makes it semi-real. It is noted that the image could just be a render to tell partners that this was a possibility, but take what you will from it. There's no pricing or availability info on either Z3-series phone or the 5G mod.

Let us know what you think of these phones in the comments below. We expect some pretty strong opinions.

We've got several confirmations that these leaks are legitimate. First of all, look at these few tweets from @evleaks:

Additionally, a Moto G6 Plus prototype was spotted in the wild by a reddit user, and it looks virtually identical to the one the render depicts. Here are the two pictures of it: 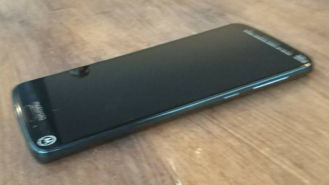 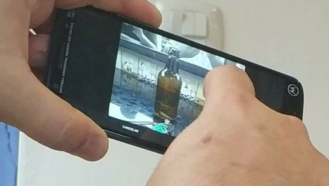 Shame that Motorola is pretty dead-set on cramming its logo in between the fingerprint sensor and screen. It'd be a decent-looking phone otherwise.

mysmartprice, the same site responsible for the Moto E5 leak, has published some more presentable photos of the full Moto G6 family, along with some other details. The Moto G6 will reportedly have a USB Type-C port (finally!) and a 3.5mm headphone jack on the bottom, which you can somewhat see in the photos. This is also true of the G6 Plus. 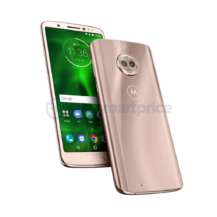 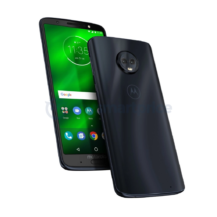 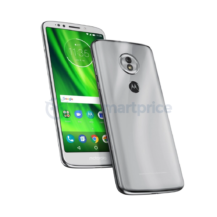 It's not specified if the G6 Play has those same characteristics, though it is worth noting that the branding on the front bezel in this photo says "motorola," not the "moto" that confused us a little in Droid Life's images.

World of Warships Blitz has officially launched on the Play Store