Action Launcher embraced adaptive icons several versions ago, and the latest update makes use of this feature in an interesting way. The new AdaptiveZoom option is an alternative to the other app opening animations included in Action Launcher. It looks pretty fancy, but this update is about more than looking good.

AdaptiveZoom, which you can see in action below, slides the app icon to the center and expands the background color to fill the screen. The animation only lasts a moment, but it's slightly longer than the standard app launch animation on most phones. To use AdaptiveZoom, you need to be using adaptive icons in Action Launcher. Oreo devices will work out of the box, but Nougat and earlier need the AdaptivePack add-on from the Play Store.

This version also sees the return of the Accessibility API (with Google's blessing). That improves the reliability of triggering system features like opening the notification shade via Action Launcher gestures. You might also notice that the app drawer now has a subtle bounce animation at the top and bottom, just like the Pixel Launcher. 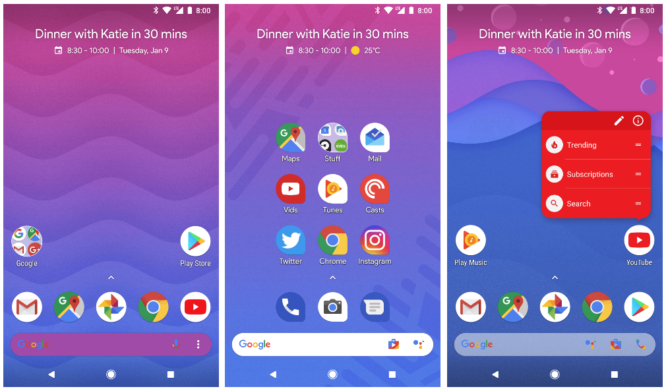 If you're particularly enamored with Action Launcher, there's also a new 2018 supporter program in this version. Like the last one, it's an in-app purchase of either $6 or $12. In return, you get some exclusive wallpapers (see above). The new version of Action Launcher started rolling out Friday evening, so it should be live for everyone today.

CES 2018 wrap-up: Even more things to connect to Assistant

[Deal Alert] Buy a new Pixelbook, get a free Pixelbook Pen ($99 off)