30 days ago, Amazon announced that it was in the process of assorting Apple TVs and Chromecasts to start selling them again. Since then, the Apple TV and Apple TV 4K have been available and sold on the site, but the Chromecast and Chromecast Ultra are still showing as "Currently unavailable" from Amazon, with no third-party sellers at all. Even searching for "Chromecast" on Amazon doesn't bring up the product pages linked above, you'd have to know the URL to see them. We've reached out to Amazon several times over the past weeks to ask about this and to inquire about an exact availability date, but were told there were no details to share. 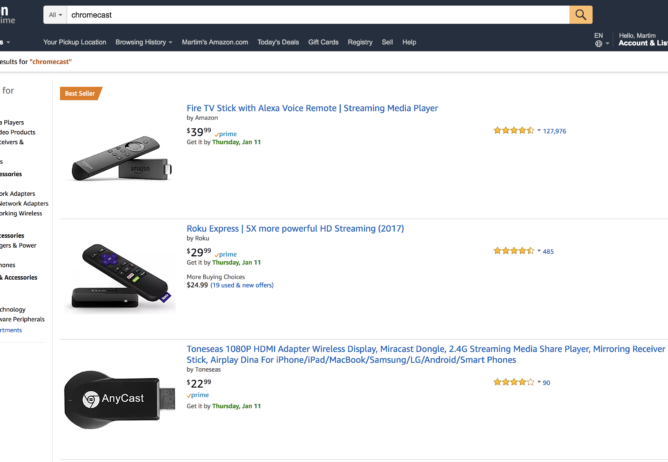 So what's the hold up? The most "obvious" (even if illogical for me) explanation goes back to the reason why Amazon removed the Chromecast and Apple TV in the first place. It claimed that it doesn't want to confuse customers by offering a product that doesn't support Prime Video, and thus now the Apple TV is back because the Prime Video app was released for it. But the Android app for Prime Video still doesn't support Chromecast (although the Amazon Music app recently added Chromecast) and so Amazon is waiting until the dev team (its own dev team) releases that so it can magically finish "assorting" and start selling Chromecasts again. I repeat, it's the obvious reason but Amazon's logic is flawed.

The second explanation could be way more complicated than that. Amazon and Google are locked in an arm-wrestling match and this does seem to be a bargaining chip between the two, in which YouTube and Nest have also recently played a part. For all we know, Google could be holding Chromecast stock back from Amazon, or maybe Amazon could be holding off on Prime Video's support (even if it was ready) and thus Chromecast's sale. The only thing I'm certain of is that many, many lawyers and negotiators are getting paid to figure this out and that consumers are suffering because of this bickering. But I do hope whatever solution gets worked out, even if it takes time, does take into consideration the potential future head-to-heads these two giants are going to find themselves in, from devices to retail to services. If CES 2018 showed us anything, it's that Alexa and Assistant are going to be at the center of the interfaces of our future, and right now Amazon and Google overlap in many areas of their businesses, way more than Amazon and Apple do, which is possibly why the Apple TV situation got sorted out so quickly.

I can't help but wonder, if this was the EU, Amazon and Google would have been slapped by an anti-competitive lawsuit and this would have all been over now.