Facebook has released its new Messenger Kids app to the Amazon App Store, making the service available to owners of its Fire line of tablets. So I grabbed one of the Fire 7 tablets we have for our kids and installed the app to see what it was all about, and just how well it works on Amazon's lowest-end hardware.

Because here's the thing: These tablets are slow. Really, really slow. Frequently on sale for $30, one would expect nothing else. They work as intended for the most part, and my kids are delighted we have them. But apps can take ages to launch, animations are jerky, and scrolling through anything is a great way to drive yourself insane.

But I can report that the Messenger Kids app runs acceptably on a Fire 7.

Facebook expects a parent to be a little suspicious of this app, so right from the get-go it lets you know that the app will not create a Facebook account for your kid. The service runs under the auspices of the parent's account, but the child never has access to do anything with that account. 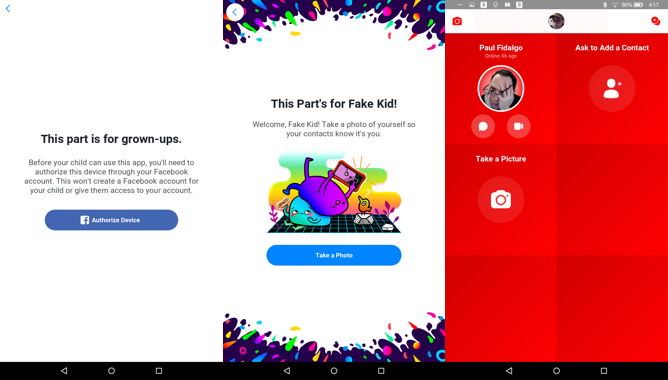 Setup is therefore very straightforward. The parent logs into their own account and pops in the kid's name. From there on, the child can take their photo (or have it taken by the parent), choose a theme color, and dive in.

Right off the bat, the authorizing parent is in the child's contact list, and that's all. Others can be added from this first screen under "Ask to add a contact," and the kid can't add someone without the parent approving of it first, thank goodness.

From there it works like many other video-chat services, with text conversations, audio calls, and video chats complete with kid-friendly, Snapchat-style filters.

And here's where the Fire 7 shows its weaknesses. The filters are cute, but take long enough to load that I was always wondering if something was wrong. Once activated, the filters seem to work pretty fluidly, without skipping or stutters. But it helps to have incredibly long arms (which I most certainly do not) because Fire 7's front-facing camera forces a relatively tight shot on one's face, and the overlays don't seem to detect your face unless it's at a distance that's difficult to achieve while holding the tablet. I eventually had to just stand the device up on my desk to play with the filters. Here's one where a pigeon poops on your picnic. 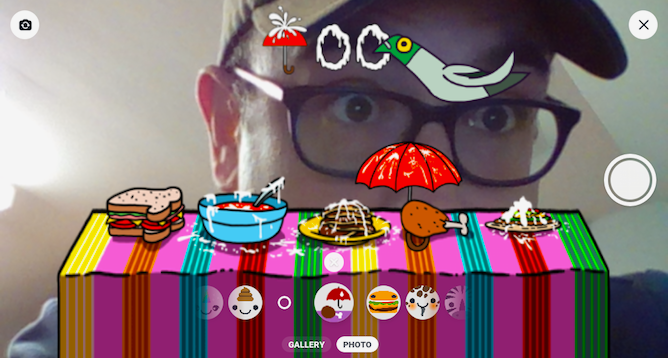 I called myself for a test video chat, and the video quality sent from the Fire was abysmally blocky, though motion was more or less smooth. As expected, there was a time delay between devices, around 4 or 5 seconds in my testing, but of course, this is all dependent on the strength of one's internet connection, so I expect mileage will vary widely. One has to assume, too, that the experience on something like a Fire HD 10 would be much better.

Now, as a parent of young kids, I'm glad my children have no interaction with Facebook and its seemingly unquenchable thirst for our attention. I worry about the extent to which Facebook as a service can manipulate emotions and reinforce bad ideas. Facebook itself has even admitted to having the potential to put us in bad moods and even turn people against each other. And my kids are already quite adept at turning against me, thank you very much.

But for now, with everything locked up tightly within a parent's control and away from newsfeeds, pages, and walls, Messenger Kids seems about as benign as a FaceTime call. I won't be keeping the app installed on my kids' devices, though. As safe as the app itself seems to be, I'm in no hurry for my kids to become accustomed to Facebook any sooner than they have to be, if ever.

Galaxy S9 and Galaxy S9+ pass through FCC, confirming some minor details about the duo