Hot on the heels of last night's Galaxy S9 box leak, the S9/S9+ duo has passed through the US's FCC. Unfortunately, since these major companies know how impatient and clever us tech nerds can be, most of the information necessary to make it through the FCC has been obscured from the eyes of the common folk. There's still some information to be gleaned here, though.

First off, the US models of the Galaxy S9 and Galaxy S9+ are internally designated as SM-G960U and SM-G965U, respectively. Given Samsung's naming scheme for the past couple of years (SM-G93xU for the S7 series, SM-G95xU for the S8 series), this was to be expected. You may note the four model numbers listed below, one of which is the standard SM-G960U. The SM-G960U1 is for the US unlocked model, indicating that will still be a thing for the S9 series. SM-G960W indicates a Canadian-market phone, and SM-G960XU is the designation for demo units. 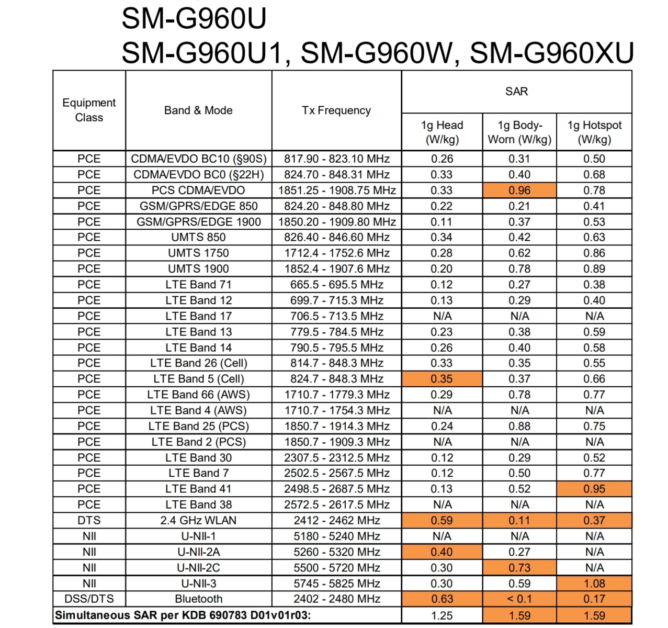 Slightly more interesting is this chart of LTE bands that will be on board. As you can tell from the mix of GSM, CDMA, LTE, and UMTS bands (as well as the single SM-G96xU name instead of individual carrier suffixes), the S9 duo of phones will be using the same model number with the same bands regardless of carrier. As for noteworthy bands, T-Mobile's newer bands (66 and 71) are both present, as you'd expect them to be on such an important phone.

Aside from the model numbers and the band chart, the only other thing worth noting at all is the FCC label, which will be in the exact same place it was on the Galaxy S8 and Galaxy S8+. The label is slightly different, with a few symbols deleted for the S9 (the '0168' and warning sign next to 'CE'). Since Samsung does its best to hide it on its phones anyway, this isn't a change you're likely to have noticed in the first place.

The Galaxy S9 and S9+ will be unveiled at Mobile World Congress in late February, so we've got about a month and a half before we can bathe our eyeballs on the real things. For now, we'll just have to sit and wait for more leaks.