OxygenOS 5.0 for the OnePlus 3 and 3T, based on Android 8.0 Oreo, was released last month. As is usually the case for major software releases, there were a few bugs that cropped up. OxygenOS 5.0.1 is now available for the OP3/3T with a few new features and bug fixes, but it's causing a harmful app warning to appear for some users.

There are multiple reports of users seeing an 'Uninstall harmful app?' warning after updating. The message, which comes from Google Play Protect, recommends users uninstall a system app called 'FactoryMode.' See the screenshot below: 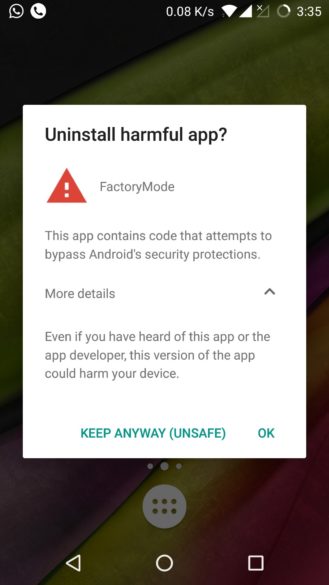 You may remember FactoryMode by its previous name, 'EngineerMode,' which was designed to assist device testing during the manufacturing process. EngineerMode received extensive coverage last month after a security researcher published a method of rooting OnePlus phones using the app, which the company has since patched.

Since the FactoryMode app is only used for diagnostic purposes, there's no danger to your device if you choose to remove it. OxygenOS 5.0.1 is rolling out in stages, so if you don't have it right now, you will soon.

Full image downloads for both the OnePlus 3 and OnePlus 3T have been posted. If you haven't already seen this update, or you were waiting for an official source of factory images outside the OTA and image zips linked in the OnePlus forums, we've got links to the downloads for each phone.

Even more Google Assistant speakers are on their way, from the likes of Anker, B&O, and Klipsch