Google recently began rolling out a slightly updated look to the contact list on the Duo video calling app. Alongside this fun rearrangement of pixels, there was also a very real, very significant change made: You can now call people that haven't installed or registered with Duo in the past. It works almost exactly like a normal Duo call, including the Knock-Knock feature.

As the video above shows, the Duo app is not installed on the phone, but an incoming call can instantly fly over the screen with a view of the caller's camera. Of course, this also works with audio-only calls. Recipients can answer the call by dragging up on the phone icon, mute their mic or change cameras, and hang up just like a regular Duo call. There is also a persistent notification icon that can bring the call back into view if you hit a button to navigate away while it's still connected.

At the end of the call, users are prompted to install Duo if they're interested in starting video calls of their own. If you look at the bottom of the screenshot below, you'll also notice a message at the bottom that allows you to block a caller from contacting you again. 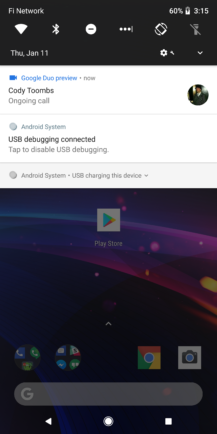 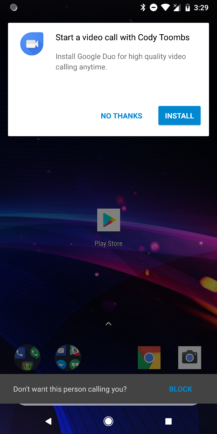 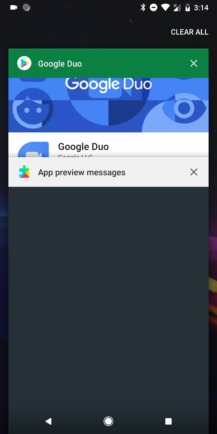 This is all operating through a feature of Google Play services called App Preview Messaging, which launched alongside Allo back in 2016. App Preview Messaging was made available to some developers through an early-access preview program with the statement that it would open up to all developers of messaging apps, but there's no sign that this has happened yet. 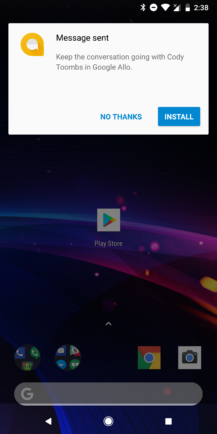 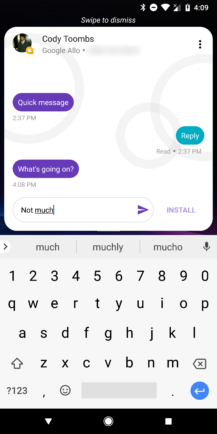 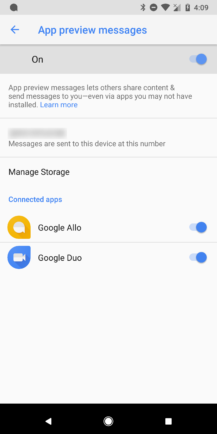 As mentioned above, Allo has supported the App Preview Messaging feature since it launched, including two-way communication. Unfortunately, the messaging window that appeared was kinda ugly and looked completely unlike Allo. More recently, the window started looking quite a bit more like Allo. It doesn't let you do most of the things that make Allo interesting, like changing text size by dragging up or down on the send button, and you can't send any attachments or images, but it's enough to give recipients a feeling of what to expect.

The ability to make Duo calls to people without it installed on their end should make it more accessible and reduce the complaints that "none of my friends use it." However, this isn't going to work with everybody on your contact list – iPhones and other non-Android devices are obviously off limits, but there seem to be other criteria that limit who can be reached. Only about a quarter of my legitimate contacts (not counting businesses) are listed. If you see an invite button next to a contact, you're still only going to have the option to send a text message encouraging them to install Duo. All the same, this opens up some more possibilities.

For many people, they will become reachable through App Preview Messaging as long as their phone number is registered with their Google account. This is obviously an action those people would have to take before others could contact them like this. It also doesn't appear to be a final fix for all users, as I can still find some in my contact list that have their numbers linked to a Google account. Nevertheless, it might be something to suggest to family and friends if it comes up. Also be sure App preview messages is enabled in the Google service settings, which it should be by default. – Thanks, Osiride and Marius.