Motorola is offering some nice discounts on several devices for an after-holiday sale, including a significant $100 savings on the Moto Z2 Play.

Usually retailing for $499, an unlocked Moto Z2 Play with 64GB of storage is going for $399 at Motorola's website, in either dark gray or gold colors. Best Buy isn't offering the unlocked version, and even the unlocked version without a U.S. warranty is still $75 more expensive at Amazon.

This Z2 Play also has a Snapdragon 626, 4GB of RAM, a 5.5-inch, 1080p AMOLED display, and a 3000mAH battery. It sports a 12MP rear camera and 5MP for selfies. It can also take advantage of the Moto Mod ecosystem of accessories, if that's your thing.

In his original review of the Moto Z2 Play, AP's Ryan Whitwam evaluated the device as a decent phone, but not worth the price. With $100 off, maybe it feels even more decent. 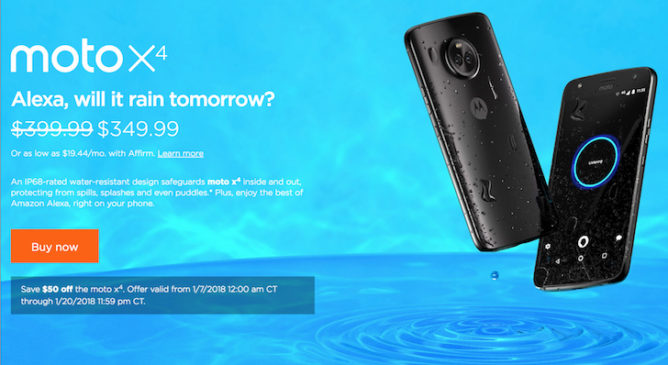 The Android One variant of the Moto X4 at Google Fi, meanwhile, is going for $75 off, down to $324. Ryan drew a similar conclusion about the X4 as he did the Z2 Play: Not bad, but too expensive for what it offers.

The discounts at Motorola's website end on January 20. If you need a phone without breaking the bank, or have a moral objection to spending upwards of a grand on a flagship device (I feel you), these discounts aren't a bad way to go.