The Pixel 2 XL has suffered from several issues since its launch, both hardware and software-related, just like pretty much any other consumer product of its kind. The latest bug to come to light is a curious one that affects the sound output level of a voice clip sent via a messaging app. According to a number of users on this Pixel User Community thread, this issue is limiting the volume level when recording voice messages on the Pixel 2 XL.

When you send a voice clip recorded on a phone suffering from the bug, the recipient gets a message with very low volume, even when their phone is turned up all the way. It doesn't seem to matter whether the listener uses headphones or the speaker on the receiving phone, the result is still a very low-volume audio recording. 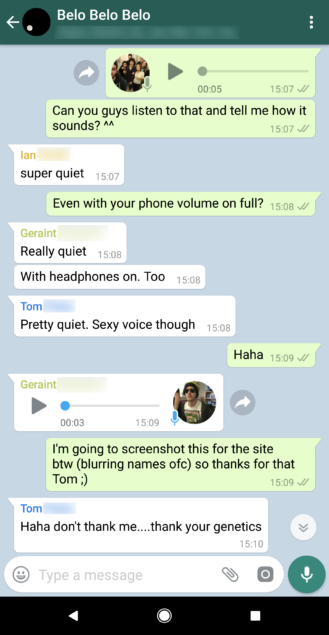 I recorded a voice message on WhatsApp with my Pixel 2 XL and asked some friends to have a listen. The consensus was that it was indeed too quiet.

Originally, it was thought the problem might lie with WhatsApp specifically, but since then several others have confirmed the bug can also be observed with messages sent via Google Allo and Telegram, suggesting a more widespread problem relating to the Pixel 2 XL itself. It's also been reported by users of both Android 8.0 and 8.1, with most who have recently updated saying it did not solve the issue, although some have been lucky. The smaller Pixel 2 appears not to suffer from the same affliction at all. Since voice calls don't result in the same low volume issues for users, it would seem likely that the bug is specific to recording audio clips rather than a wider complication with the microphone hardware.

The community has tried to come up with ways to solve the problem, with suggestions such as uninstalling/reinstalling the afflicted messaging app or factory resetting the phone, but all to no avail. With several other threads on the same topic surfacing (here, here, and here) the complaint was finally escalated, and Community Manager Orrin eventually issued an official response, saying that Google would look into it:

Now, we wait. It's a bug that will affect users to differing extents, depending on whether it's a feature that's often used. For example, I have friends in the Netherlands for whom voice messaging is probably more significant than typed messaging, so this could be a real pain for them. By contrast, here in the UK (in my friendship group, at least) we seldom send such messages, so even if my phone has had this bug for some time I wouldn't have noticed. Let us know in the comments if this is an issue you've come across. I'm sure it's very frustrating for those who depend on voice clips for conversing with friends and family.