Having a single router in your home is so 2015. Everyone is doing this mesh router thing now, which means you have two or more access points in order to provide better coverage. Netgear is looking to take its mesh router beyond the confines of your indoor space with the new Orbi outdoor satellite. While it's not supposed to be "official" until CES next week, Netgear has made all the details available.

The outdoor satellite (RBS50Y) pairs with your existing Orbi system, which includes between two and four individual APs. It's IP56 rated, so it can be left outside in the pouring rain. Taking it for a quick dip in the pool would be a bad idea, though. It can also operate in "subzero" temperatures, but Netgear doesn't offer specifics here. 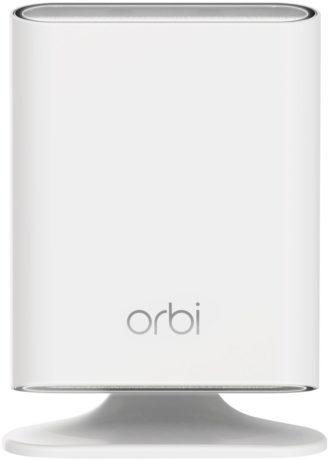 This unit can light up a 2,500 square foot outdoor area with WiFi coverage, but it'll cost you more than other Orbi satellites at $329.99. Additionally, there are no ethernet ports on this one; it's wireless only. You can already pre-order the outdoor Orbi satellite from Amazon, Fry's, and others right now. We may get more details on this device at CES next week.

LAS VEGAS — January 8, 2018 — NETGEAR®, Inc. (NASDAQ: NTGR), the leading provider of networking devices that power today’s smart home and small to medium businesses, is making it even easier for you to enjoy better WiFi mesh, everywhere, with the new Orbi™ Outdoor Satellite (RBS50Y). This CES 2018 Innovation Awards honoree connects to any Orbi Tri-Band Whole Home WiFi System or Orbi Pro Tri-Band WiFi System for Small Businesses and seamlessly extends high-performance WiFi coverage outdoors, up to an additional 2,500 square feet. Enjoy uninterrupted 4K HD videos on your mobile device or stream music to speakers in the backyard, guest house, or poolside without experiencing the labor-intensive effort and expense of running additional Ethernet cables to the yard.

The new Orbi Outdoor Satellite inherits the capabilities of the Orbi Whole Home WiFi System, including a single network name for seamless roaming, a dedicated third channel for data exchange between the satellite and router, and a separate and secure Guest WiFi network. The new satellite will also adopt the characteristics of Orbi Pro for Small Businesses when added to that network, such as guest and employee traffic separation and a dedicated admin network. An added feature of the Orbi Outdoor Satellite is ambient lighting that can be scheduled to automatically light up to add ambience, or turned off, to keep the Satellite hidden and discreet.

An Orbi WiFi System includes at least two components as part of the mesh network, a router and a satellite, that are pre-paired together for an easy out-of-the-box set-up. Simply connect the Orbi router to your internet modem or service provider gateway, and place the Orbi satellite somewhere central to the area of intended WiFi coverage. Depending upon the Orbi System installed, the WiFi coverage area can range from 3,500 square feet up to 5,000 feet around your property. By adding an Orbi Outdoor Satellite to an existing Orbi WiFi System, the range of the WiFi mesh coverage zone can be expanded to another 2,500 square feet extending to the farthest perimeter of your property for WFi at the pool, guest house, garage and the grill.

The Orbi Outdoor Satellite installs in minutes with a push of a button, or via the Orbi App. It connects with the Orbi Router through NETGEAR patented FastLane3™ Technology, which offers Tri-band WiFi, a Quad stream wireless dedicated backhaul of 1.7Gbps over the 5GHz band from the satellite to your router, and optimized antenna design. Within minutes, you’ll have a single, secure, high-performance WiFi mesh network all under one network name, both inside and out.

“Orbi Outdoor Satellite is an exciting new addition to our family of Orbi WiFi Systems. WiFi is now considered a basic home utility. When you turn the faucet tap, you expect water to flow. When you flip a switch, you expect the lights to glow. It’s the same for WiFi,” says David Henry, senior vice president of Connected Home for NETGEAR. “You want WiFi wherever you need it, when you need it, and it shouldn’t matter whether you’re inside or outside the home. It is frustrating to go into the garage or the backyard and to have your WiFi connection drop. By adding the Orbi Outdoor Satellite to your Orbi WiFi System, you’ll enlarge your WiFi coverage to reach the farthest corners of your property.”

Multiple Orbi Outdoor Satellites work together to extend the mesh network reach and coverage, while still maintaining the single-network name and seamless roaming. The Orbi satellites automatically configure themselves to provide the fastest WiFi possible to each and every device. You, your family, visitors and customers will be able to move from one location to another, while continuing to be connected to the most optimal Orbi connection at any given moment.

Designed to withstand rough outdoor weather conditions including sub-zero temperatures, Orbi Outdoor Satellite has an international standard IP56 rating for dust and water-resistance. It can be mounted on a stand or wall-mounted, for flexible deployment options on the side of a house, garage, terrace or shed.

Around your residential property, you can benefit from Orbi Outdoor Satellite in a variety of scenarios. It’s easy to install within minutes due to its flexible placement options, weather-resistant design, and seamless roaming feature.

Need more reasons to install Orbi Outdoor Satellite? The following are some of its top features and benefits:

Pricing and Availability
The Orbi Outdoor Satellite (RBS50Y) is available now, in the United States through authorized NETGEAR partners and other reseller channels, ecommerce sites, and major retailers, at an MSRP in the U.S. of $329.99.