Someday in the not-too-distant future, your Android phone might try to hide the quality of your current cellular connection from you. The eagle-eyed folks over at XDA Developers noticed a recent commit to the Android Open Source Project that indicates an option has been added for carriers to disable user-facing signal strength from appearing in the SIM Status screen in Settings. However, the motivation for this change is a mystery. 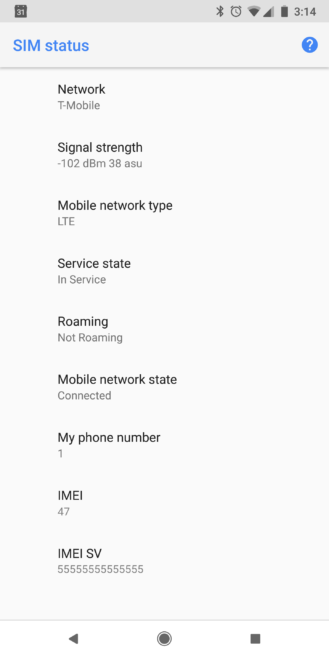 For the full technical details on how this change works, you can read XDA's post. But the short version is that the new change, if implemented, would allow for a phone to disable the "Signal strength" metric from appearing in Settings, based on the carrier configuration that is presumably applied when a SIM card is inserted.

Humorously enough, this change doesn't affect other API calls for the same information, so other apps like LTE Discovery or Signal Strength will probably still be able to request and show signal strength.

We're not quite sure why this change might have been implemented. XDA believes it could have been done at the request of one or more carriers for an unknown reason, but the precise technical motivation and need for hiding the information remains a mystery. Who knows, this change may never make it into a release. And, if it is included in a future version, we'll probably know why by then.

Android 8 Oreo may be causing Wi-Fi connection problems for some with mesh routers like ...