Ever since Motorola was purchased by Lenovo, the company's quick updates have become a relic of the past. Motorola announced which phones would receive Android 8.0 Oreo back in August, and now it looks like the Verizon Moto Z2 Force is first to get Oreo. 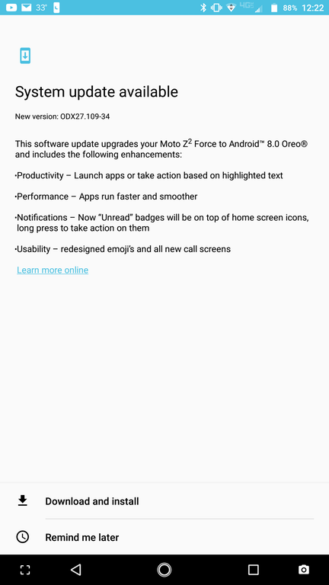 One user on Reddit, named motoxcolors, posted a screenshot of the update screen on his Z2 Force (pictured above). A few others have chimed in with confirmations. Motorola doesn't make many changes to Android, so this is still the mostly-stock experience that Moto users have come to expect.

There's no ETA for when other variants of the Z2 Force will receive Oreo, but I would guess sometime in the next month or two.

Verizon's page about the update has now gone live. It confirms that the Oreo update also includes the December 1 security patch level.

What We Use, 2017 Edition: The stuff Ryan can't live without