Razer announced its first phone almost two months ago. Since then, the device has accrued some good feelings from reviewers. The 120Hz snappiness and flagship-level specs all spoke to a high-performance device, but the poor camera results were an unfortunate oversight. Razer's CEO, Min-Liang Tan, promised to improve things with future updates, and today the first of those updates has landed.

Razer's CEO, as he usually does, preceded today's update with a post to his Facebook account. In it, he said that although the Razer Phone "launched with a good [sic] camera app," the company is hard at work integrating feedback for improvements and that the first of such updates would be landing soon. And, by all accounts, here it is.

A post made by a community specialist on the official Razer forums also indicates that another update should be coming soon, which will introduce a 2x zoom button and faster shutter speeds in low light. 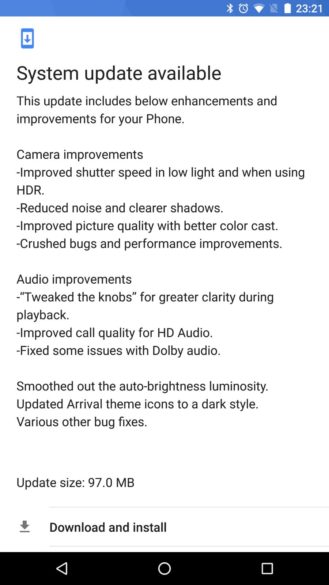 A screenshot of the changelog included with the update. Image via XDA Forums

Based on reports from XDA Forums and the Razer forums, the update is 97MB in size and rolling out to at least some people right now, so you'll want to check your own phone to see if it's available.

In addition to those camera improvements—improved shutter speed in low light/HDR, reduced noise, improved picture quality, and bugs/performance fixes—there are also some audio improvements included in this update. The Razer phone's USB-C DAC was highly regarded when it came to audio quality already, but it appears the company is interested in further audio improvements.

Lastly, the poor performance of the phone's automatic brightness setting was a common complaint, and this update includes fixes that should smooth things out, among other more minor improvements and fixes.

Here are 19 temporarily free and 99 on-sale apps, including titles from Square Enix, OUYA, ...