I loved the original SoundSport Wireless, but my one real gripe was the cable between the buds: it rubbed against my neck in a kind of annoying way, and I yearned for a true wireless take with a similar design. Despite that, they were supremely comfortable, sounded great, and worked with Bose's excellent companion app on my phone.

The SoundSport Free do make some sacrifices in order to ditch the cable. Battery life is worse, audio is marginally inferior (but still great!), and they're easier to lose. And, as I mentioned, they're stupid expensive. They also have significant advantages: there's no cable rubbing on your neck, and they come with a case that can fully recharge the SoundSport Free twice (the normal SoundSport Wireless charging case is $50 extra).

The short of it is this: if you want a true wireless earbud that doesn't sound mediocre, you don't have many options. The SoundSport Free sound very good (much better than the Jaybird RUN) and are low on compromise. This is a wireless earbud for the person who just wants the best the segment has to offer, and right now, these Bose buds fit the bill.

... minus one drawback: A/V sync on them is terrible. It pretty much ruins them for anyone planning to watch video content. That's a bummer. 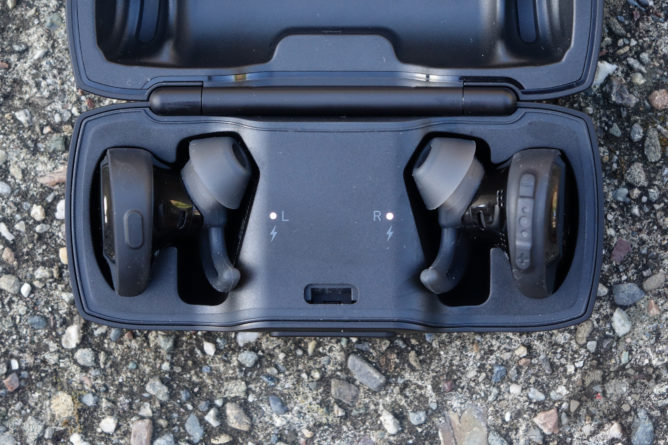 I will make no bones about it: the SoundSport Free, like the SoundSport Wireless, are large. Everyone is going to notice these sticking out of your ears. The reason for this is to accommodate both the battery and a substantial driver housing so that the SoundSport actually make bass. Most wireless earbuds sound a bit thin, and those that do sound bassy generally only manage this by achieving a full seal against your ear canal. The SoundSport Free do not seal - they're meant for runners and cyclists who need to be able to hear the environment around them.

They utilize a "wing" design that is proprietary to Bose earbuds, and I think that's a huge part of the comfort factor. The SoundSport Free are barely noticeable sitting in my ears even after an hour on the treadmill. Bose has the "eargonomics" (I'm sorry) absolutely nailed, at least for me. 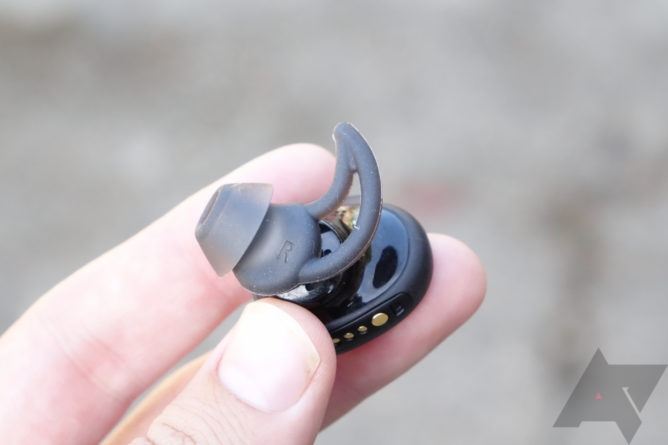 Many people would expect because of their large size, the SoundSport Free would be rather heavy, but they really aren't - most of that volume is dedicated to the driver housing and wireless antennas, neither of which are particularly massive. I find the SoundSport Free more comfortable than the Jaybird RUN, despite the fact that they hang significantly farther outside your ears.

Speaking of which, yes: these are kind of ugly. People will notice you are wearing them, and they will probably get flashbacks to the Bluetooth earpieces of years past. This may matter to you. I can't say I particularly care.

The one gripe I have on design is that the buttons on the SoundSport Free are terrible. I don't even use them - the amount of force necessary to actuate the volume controls or pairing button is absolutely absurd. It's like using a gas station keypad, except harder. I get that they're sealed to prevent moisture ingress, but this is kind of ridiculous. 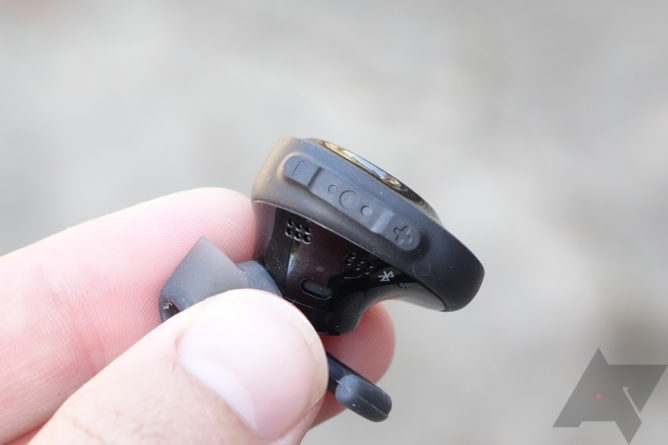 I loved the audio on the SoundSport Wireless, and the SoundSport Free largely live up to the expectations their predecessors set. I think that Bose had to make some compromises on account of the design, though. Since both earbuds now need to house antennas and have enough juice to get to Bose's 5-hour runtime figure, I think the size of the driver housing has been reduced. The SoundSport Free are noticeably less full-sounding than the standard wireless model, but I think that's really most of the difference.

Highs and mids are still surprisingly clear and detailed for a wireless earbud, and the overall character of the sound is unmistakably Bose - shaped for a lively, bold signature that really makes your music "pop." Not everyone will like this: these are far from a reference IEM character, and they aren't intended for the audiophile audience. That all said, I still really like the way the SoundSport Free sound, and I think Bose is absolutely beating the pants off the competition in this particular regard. If there's one thing that can get close to justifying that $250 price point, it's that no other true wireless earbud is going to sound as good as these ones do. Bose gets a lot of flak for its pricing relative to quality in the home audio segment, but I think they're doing an excellent job with headphones. If you don't want to pay the price, I fully understand, but anyone denouncing Bose's commitment to sonics clearly has never used a set of their headphones.

Because the SoundSport Free are non-sealing, Bose addresses the issue of bass with a large driver housing. You can still hear the outside world when wearing the Free, unlike Jaybird's RUN, which create a seal in your ear canal. This is an important factor for those people who will be using these in outdoor activities where being able to hear the ambient environment is important for safety reasons. 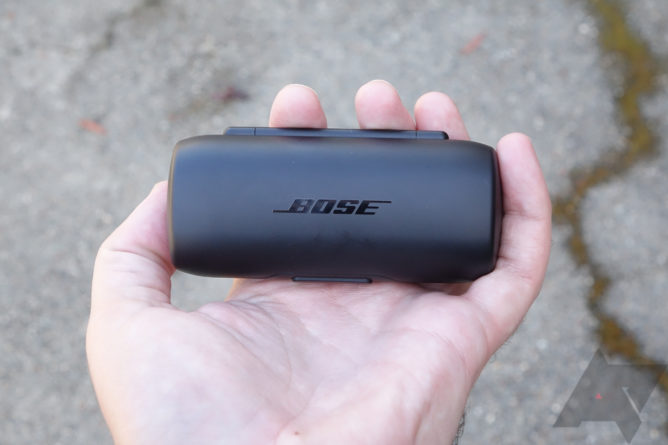 Using Bose's Connect+ app, setting up the Free was simple. Just take the buds out of the charging case and they'll automatically enter pairing mode, open the app, and drag to connect them. I do sometimes have to do the app step twice for whatever reason, but it always ends up working after the second try. Once you've done that, you're good to go.

During my testing, I also had no issue at any point with the two earbuds not connecting to one another or signal cutting out on only one earbud. The SoundSport Free had excellent connection quality and range - I was able to get a full twenty feet away from them with my Pixel 2 XL without interrupting the stream. That's very good. I also didn't have to keep my phone in a specific pocket for them to work reliably. 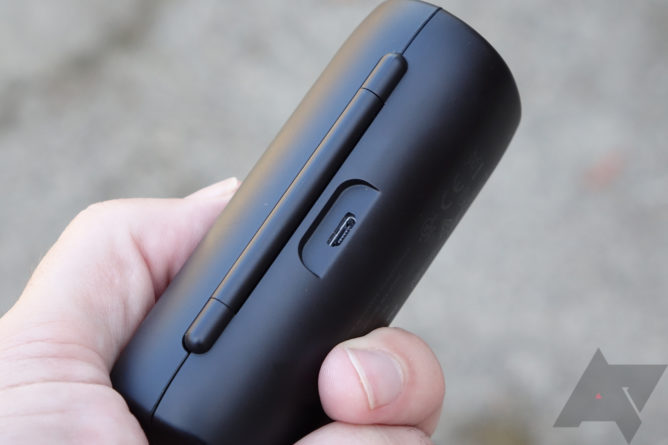 The case charges via microUSB, annoyingly - give us USB-C, Bose.

Bose seems to have its Bluetooth ducks in a row, and I have zero complaints about the connectivity on the SoundSport Free. There's even a "find my buds" feature that will cause the earbuds to loudly beep if you lose them (granted, they have to be connected to your phone).

Battery life was predictably below Bose's quoted figure, but I listen to my tunes at the gym pretty loud. I think 3.5-4 hours is a reasonable expectation for the SoundSport Free at higher volumes, but I'm guessing you could get a lot closer to Bose's estimate if you keep the volume lower.

As I said in the introduction, the A/V sync on the Soundsport Free is pretty bad. Even after the version 1.3 firmware update that Bose said should have addressed it, neither my iPhone X nor my Pixel 2 XL could keep audio and video in any kind of respectable synchronization. Prior to the update, it was considerably worse, but even now it's still pretty bad - it feels like there's a good half second of delay between audio and video (before, it was more like a second or two, which was awful).

If you don't plan on watching much video with these, it's not an issue. If you do, it's a dealbreaker.

Truly wireless earbuds are the future of personal audio, and I'm comfortable saying Bose's take on the concept is the best I've used yet - that critical A/V sync issue aside. Yes, they're a bit... obvious, but they sound pretty damn good.

$250 good? That's a question for you and your wallet, not so much me. Value is largely in the eye of the beholder, and if you want the very best-sounding set of true wireless earbuds, $250 may be a small price to pay. If you're wondering if there's some magical feature in particular that makes the SoundSport Free $90 better than a pair of Airpods, I don't have much for you. They certainly are going to sound better (and probably stay put more securely), but they're a tad more conspicuous.

Anyway, the SoundSport Free have immediately become my go-to gym headphones, and I think that's the best endorsement I can give them. They're supremely comfortable, sound great, and Bluetooth performance is excellent. That's got to be worth something. But if you want to use them for video, I just can't recommend them, and at that price, the A/V sync performance is nearly inexcusable even if you aren't watching that much video. Jaybird got this right on the RUNs, and Apple did with the Airpods. What gives, Bose?

Here are 19 temporarily free and 99 on-sale apps, including titles from Square Enix, OUYA, ...

Amazon files trademark for 'Amazontube,' may be planning a YouTube competitor