Misfit's Vapor smartwatch has been the butt of many jokes since it was announced. The delays combined with the product's name almost too aptly, with many crying "vaporware!" each time it made it into the news. Turns out we'll all have to eat a generous portion of humble pie, as Misfit's latest Android Wear-powered smartwatch is now listed as in stock on Amazon, and you can grab one for just $140.

It's a bit later than the original October 23rd release date Amazon had listed, but better late than never. The Vapor looks like an excellent value for the price, with Android Wear 2.0, a round flat-tire-less AMOLED display, heart rate sensor, 50m water resistance, and alleged 2-day battery life. It might not have the integrated GPS originally promised, but for $140 it doesn't sound disappointing in the least. 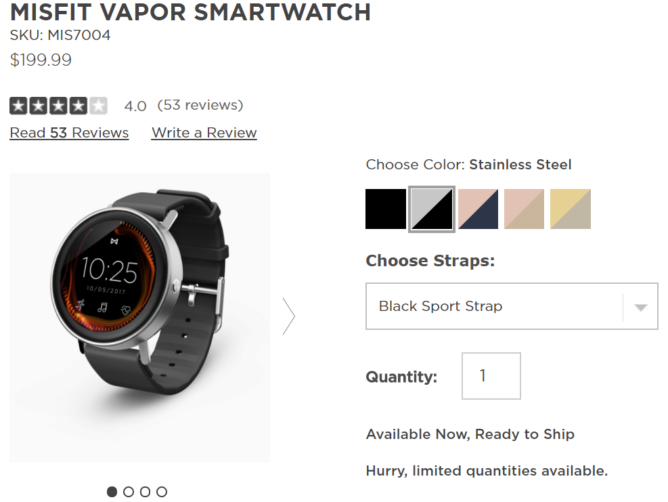 The watch is also listed as "ready to ship" on Misfit's site if you feel like paying $60 more. There are more color options available there, though.

If you're one of those (like me) who ordered it previously for $10 more, it might be worth either contacting Amazon to see if you can get a refund on the difference or canceling and recreating your order before it ships. It's also worth noting that the Gold SKU, which was previously on Amazon, is now curiously absent, so all you can get at this time is Black.