Spotify's been doing incremental tweaks to its Android UI for a long time. Since I've been working here at AP, it seems like we get at least a tip or two a month related to one minor change or another. That means the company's server-side A/B changes are pretty well known to us as a result of our position in the grapevine. Recently we've been getting reports of a UI test that includes a new consolidated three-tab navigation, simpler list views, larger interface elements, and the return of an old UI test.

These changes appear to be server-side, as is usual for Spotify. We've updated some of our devices to the latest beta, and we still aren't seeing them. Spotify's also been known to do this sort of A/B tests for a long time before rolling out changes to larger groups, and sometimes these tests don't go anywhere. So if you don't like these changes, you might not have anything to worry about. Think of this as one potential future. 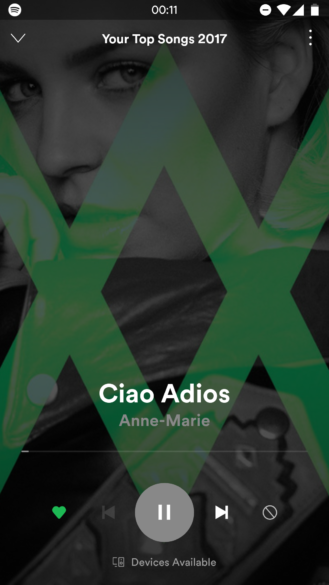 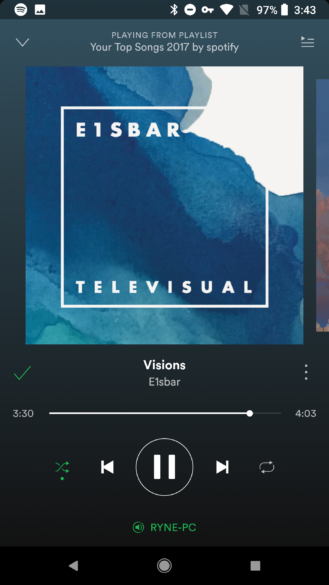 Some of these changes have been rolling around for a long time. Spotify is well known for doing extensive A/B tests when it starts tweaking interface elements, and the new Now Playing screen that's being reported is one of those things. We've been receiving tips for variations on this layout change for a long time, and we first reported on it back in January. If you'd like to check it out for yourself, it looks like you can manually force it to appear via songs in the Your Time Capsule playlist (Home -> Made for You -> Your Time Capsule). It looks nice and clean. 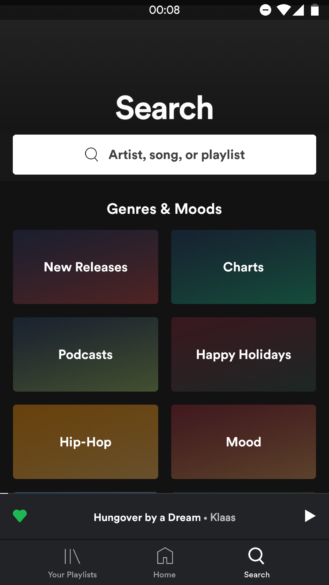 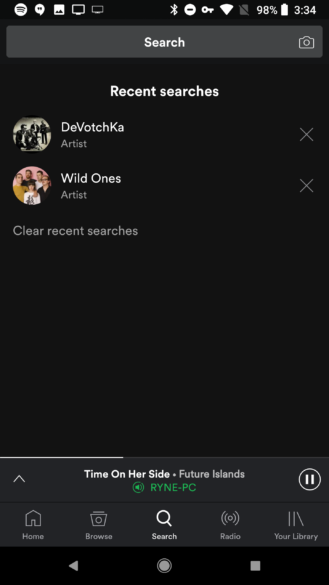 Search on the new UI (left), and currently (right)

The new Search tab does a much better job of using the available space, and it does so while providing some additional features. It's tough to say precisely how it might work in application since all we have to base an assessment from are these images, but it looks like it pre-populates the page with some easily accessed results. If those can be tied to your existing preferences, that could be quite a time-saver.

The most prominent and far-reaching difference in the new interface relates to navigation. The five bottom tabs in the current version have somehow been consolidated down to three. It's almost guaranteed that the loss of the Radio and Browse tabs will upset people that might have used them, but I think streamlining the app is a good thing. The new interface looks much friendlier and easier to navigate. 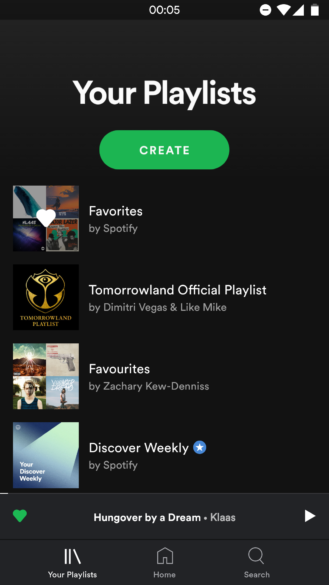 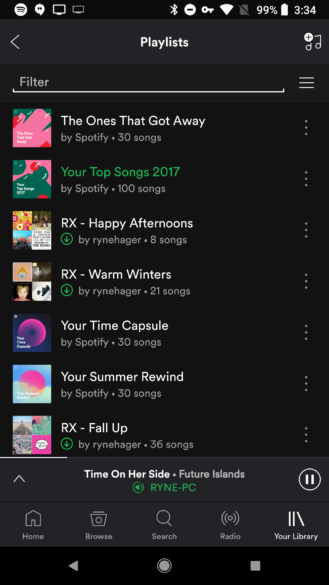 Playlists on the new UI (left), and currently (right)

While the new Playlists page looks much less busy and more friendly, it's also less dense. For people like me that have a ton of playlists, that could be a serious problem. It already takes ages to find what I'm looking for manually (and the search tab, unfortunately, doesn't prioritize direct matches for playlist names, making that a scroll-fest, too). This change in the vertical size of each playlist might make for a more accessible experience, but it's going to hit some of us hard. 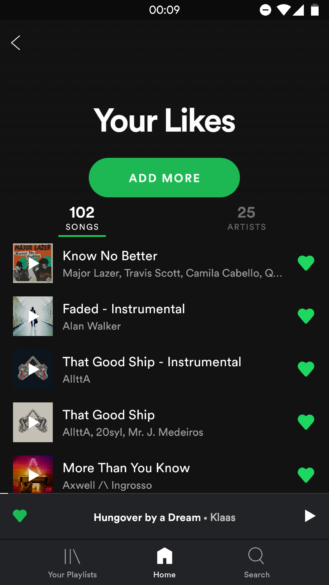 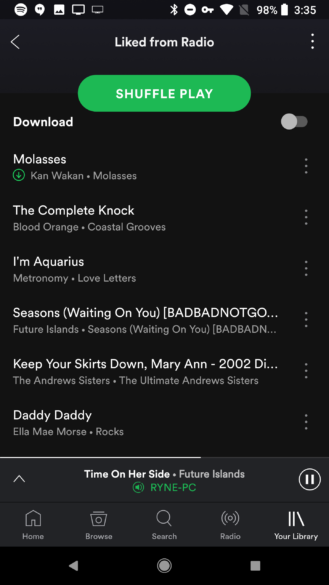 Some of these changes are harder to pin down without being able to play with the new interface ourselves. There's a new "Your Likes" playlist we've seen in the screenshots making the rounds, but we can't tell if it's a replacement for the "Liked from Radio" playlist or something new. 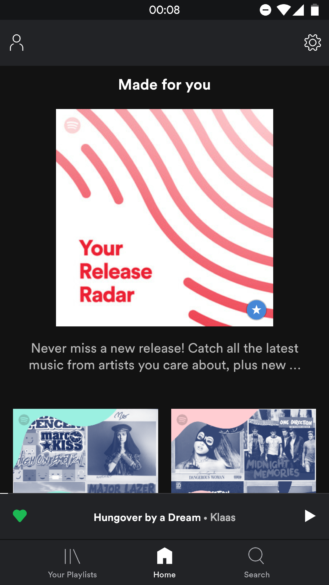 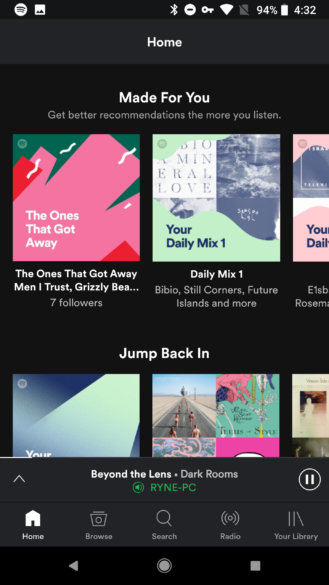 Made for you section in the new UI (left), and currently via the Home section (right)

Note that it looks like the settings menu and profile icons will now show up in the Home tab (currently they're only in Your Library). That seems a bit inconsistent since most of the new changes are about removing clutter, but I think it's a good move. 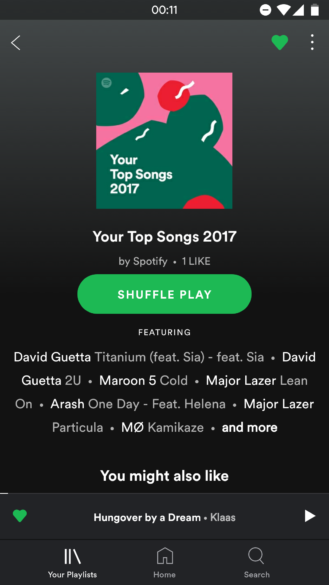 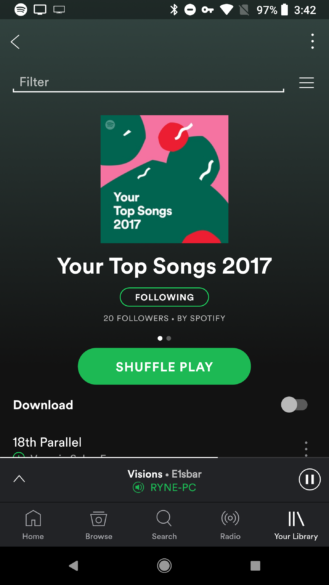 All of the changes look to be making the interface much less busy, with fewer menus, larger design elements, and fewer buttons whenever possible. Every page seems to be trying to provide a more accessible overview rather than immediately thrusting a detailed list on you. This is the sort of change that could make Spotify much more accessible to a less technical audience, but it could also be a thorn in the side of the service's power users as less popular features are hidden away.

Again, this is all conjecture until we get a chance to play with the new interface ourselves. And we may never get to, Spotify could decide not to roll out the changes to a broader audience. That's what A/B testing is for, after all. We'll just have to wait and see.

T-Mobile wants to 'Un-carrier' television with its own service