Google has now released three versions of the Google Home, each with its own unique size and price point, but none of them are portable out of the box. Untether them from their power cords, and you'll be left with an interestingly-shaped paperweight (well, the Home Mini actually somewhat resembles one).

Those of you looking for a mobile Home have probably run into this: Ninety7's LOFT battery base for the original Google Home. Ninety7 is no stranger to these battery bases, having made the similarly-priced VAUX, a base with a more powerful speaker for the Echo Dot. But at $49.95, the LOFT isn't cheap, and it doesn't add better speakers like the VAUX does. Unfortunately, with the introduction of several competitors, I can't see a legitimate real-world use for it.

The Ninety7 LOFT is a simple product, but that doesn't mean it can't look good. The metal enclosure is perforated to allow the Home's speaker to transmit through, and it feels extremely sturdy. There are two neodymium magnets within the bottom that allow your Home to pop right in. These magnets are strong enough that you can lift the Home by the top and not have to worry about the two pieces disconnecting, but you can still pull the two pieces apart if you need to. 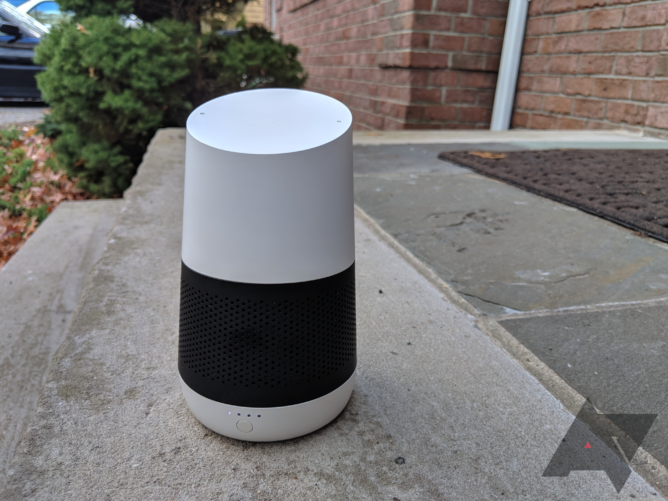 Looking at the bottom of the unit, you'll notice four LED lights and a button. That button is how you power the device on (with one push) and off (by holding it down for three seconds). The LEDs are always on to show you the battery level. There's a nice foam pad on the bottom that prevents the LOFT from sliding around, and it's effective. A charger isn't included in the box, but that doesn't really matter since it uses the same charger as the Home. 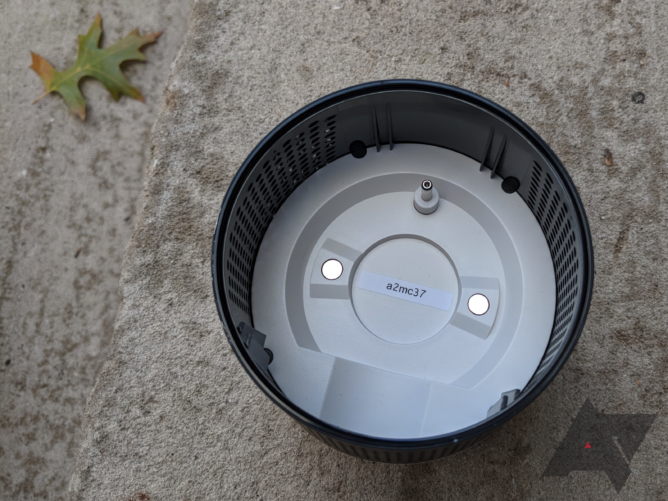 The LOFT comes in three colors. The unit I have here is Carbon (read: black), but it's also available in Snow (silver) and Copper. You'd have to be pretty daring to have Copper fit into your general house aesthetic, though.

With the LOFT installed, your Google Home will become pretty heavy. However, since you'll primarily just be moving it from room to room every so often, that's not a big deal. What's good is that sound quality isn't affected. In fact, Ninety7 even claims that it offers "crystal-clear highs and rich bass." I didn't notice much of a difference from the Home with its regular base on, but hey, at least there's no degradation. 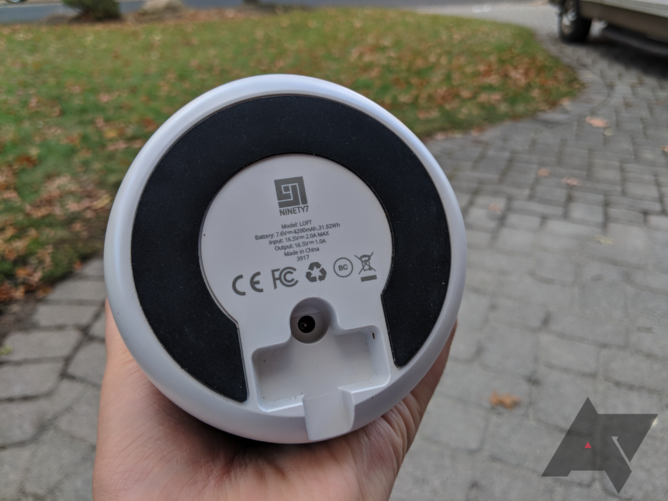 Battery life seemed on-par with Ninety7's claims of eight hours in my testing, though results will obviously vary with different usage patterns. I personally don't listen to much music on my Home, but with maybe an hour of music playback, a few questions answered, and several hours of standby, I only drained about a quarter of the LOFT's battery. Again, your mileage may vary, but I don't think you'll be using your Home for anywhere near that amount of time off the charger anyway. It takes approximately an hour to recharge to full for a depleted battery. 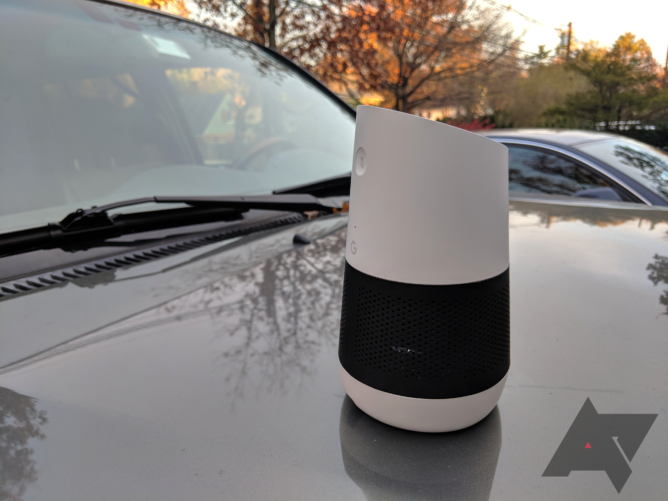 After I'd concluded most of my thoughts, I ended up dropping the Home with the LOFT installed from about three feet onto a hardwood floor. This impromptu drop test left minimal marks on both the Home's and LOFT's casings, but functionality doesn't seem to have been affected. I initially thought this had rendered it useless since I tried to turn it on a few days later while hooked up to the charger to no avail, but it woke up after an hour or two on it.

Ninety7 seems to be marketing this as an in-home device. After all, since Google Home requires a Wi-Fi connection to work, it wouldn't make much sense to be bringing it everywhere with you, especially since you'd have to reset it every time and it's a little too big to bring around. But if this is true, why not just get a Home Mini? 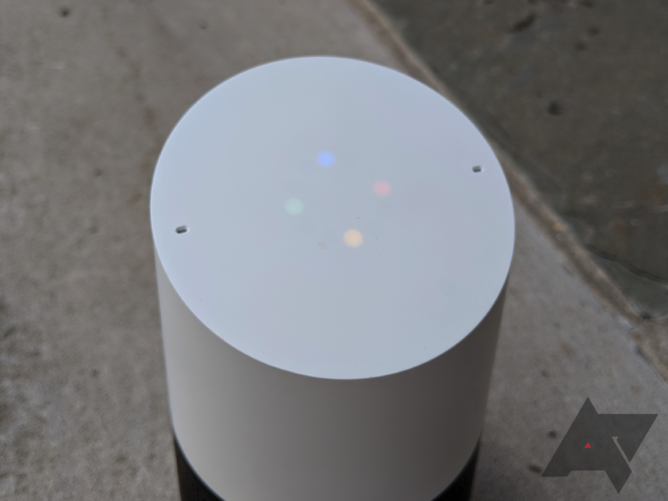 From now until the end of the year, the Home Mini is only $29. That's noticeably cheaper than this $50 add-on, which also requires a normal $129 Home (which, in fairness, can be found for about $80-90 these days) to function. If you're bringing this over to the kitchen to cook alongside, or maybe to a different room in the house to just use as an assistant, why not just buy one or two Home Minis and install them where a speaker/Google Assistant is most often needed? This way, you wouldn't have to lug this thing around or deal with having to plug it in every few hours. Sure, the speaker quality will take a slight hit, but it's not like the Home was a shining example of a speaker in the first place. 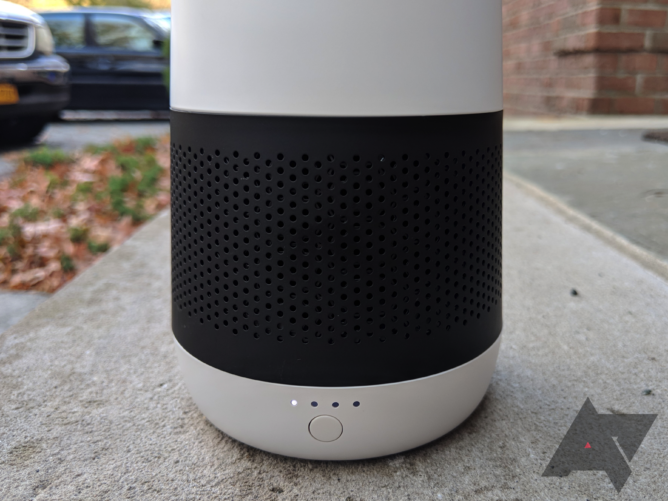 The only real use case I can see for the LOFT is where your Wi-Fi extends further than an outlet in your house. For instance, if you're having a barbecue on the patio and there are no accessible power outlets, this could come in handy. But if you actually need to bring it outside your house, the Home itself was already pretty large and heavy, and the LOFT doesn't make that any better. For those situations, you'd be better off with a legitimately portable solution like the TicHome Mini, even if it is twice as expensive.

The Ninety7 LOFT is a good idea that's been ruined by the existence of the Google Home Mini. Since the Google Home isn't supposed to be taken outside the house (and it doesn't seem like Ninety7 wants you to with the LOFT, either), virtually everything the LOFT exists for can be accomplished with the cheaper Home Mini. That also takes the fuss out of having to bring it around and plug it in when the battery dies. 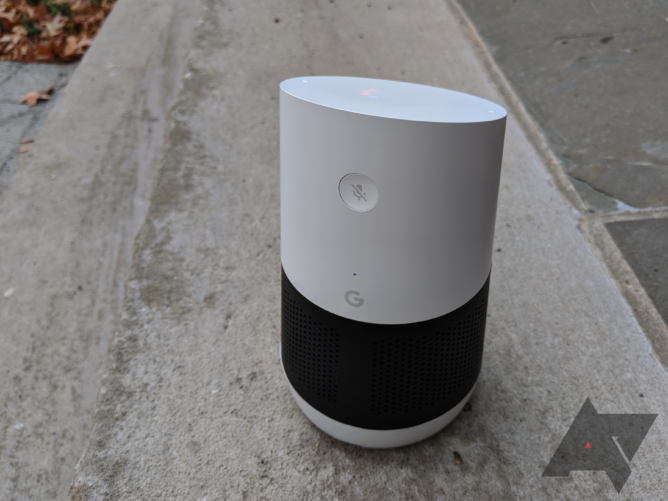 While I don't think a LOFT is a logical buy, it might still be if you need your Home with you at all times, or if the Home Mini's sound quality isn't quite up to snuff. If you think you could make use of a LOFT in your life, you can purchase one from Ninety7, Amazon, Best Buy, and Jet.

[FYI] For some, mobile data is now set to "always active" by default in Android Oreo