Last year, Google Photos introduced 'Movie Concepts,' which are videos automatically created from the photos and videos in your account. They're much like the vacation videos the app puts together when you go on a trip away from home, but based on different themes. The first example was a movie about your kids growing up, but Google said it would be expanding the feature to include other life events and holidays in time. 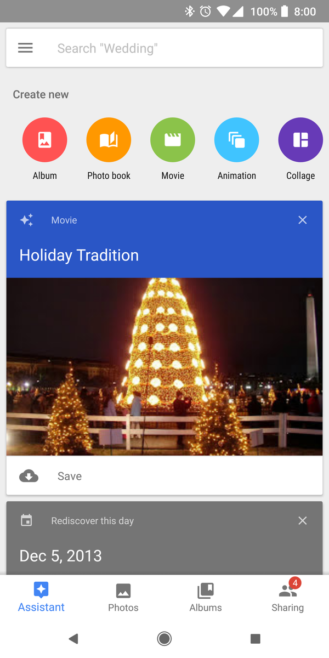 It looks as though that seasonal category is ready just in time for the holiday season. Artem was greeted with the above movie creation, titled 'Holiday Tradition,' which seems to have picked out Christmas-themed imagery from his recent photos. We expected this at some point, and Google previously promised movies for other holidays such as Thanksgiving and Halloween, too.

It's unclear right now if this is part of a wider rollout or something Google is testing among a limited set of users. So, you know the drill, let us know in the comments if you've come across this yet, or if you do in the near future. I might go out and take some photos of Christmas decorations to see if I can trigger it.