The first thing I would like to point out is that Portal Knights is indeed a console experience on mobile. Better yet, this Android release is priced at $4.99. When compared to its console and PC counterparts that cost $19.99, it is apparent that the Android price is most definitely a steal for the amount of content you receive in return. And despite the fact that the Play Store listing shows that there are in-app purchases included in the game, there are in fact none to be found.

You will start out by choosing your character's class, which range from warrior, ranger, to mage. After you customize your character and name your universe, you will be plunked down into a randomly generated world. From here you will make your way through the game's tutorial, which shows you the basic controls and general real-time fighting mechanics.

As for the gameplay, well, it offers just about what you would expect of a 3D sandbox action-RPG. You get to traverse plenty of unique environments, meet tons of NPC characters, discover a whole range of creatures and resources for crafting. Plus there are plenty of caves, lakes, and dungeons to make your way through that are filled with quite a few surprises. All of the combat is action-based, and there are plenty of ways to go about building a ton of different structures. You will also be tasked with collecting dozens of materials to craft those structures as well as all of your supplies. 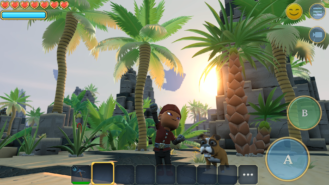 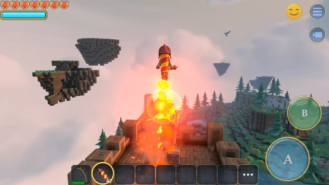 The controls work well enough on a touchscreen, though the camera often needs correcting. I found the default camera sensitivity to be a little too high, though it can be adjusted in the game's settings. But even with a lowered sensitivity the camera still feels as though it is lagging behind where you are moving it. This can be disorienting and does not help when you are in the middle of a battle. I also noticed that there is no HID controller support, which seems odd for a game ported from consoles and PC. I would say the controls are where I struggled the most.

Loading times are also a real pain. It takes forever for Portal Knights to boot up, with it only displaying a black screen that makes you think your phone has turned off. Then you have to deal with even more loading when opening up your universe. I'd say in total it takes a good 3-4 minutes to get into the game.

It is also worth noting that Google Play Games Services are supported with an auto-sign in and an achievement system. Glaringly absent is a cloud save feature. Honestly, at this point, I find it pretty confounding that cloud saving is not a staple for such prominent releases.

Oh, and as of version 1.2.7, the game takes up 519 MB of storage. So it may not be the largest release on Android, but it will take a little while to download the game in full, so be prepared.

All in all, I would say Portal Knights is a quality port that could still use a little polishing. The gameplay can be pretty fun even though you will have to fight with the camera a little too often. Also, the lack of cloud saving is a major sore spot for me. Luckily the price point is just right, so these quibbles can be easily ignored when you consider just how much content and replayability you receive for $4.99. While I can't say this is the next Minecraft, the slight changes to the standard sandbox formula and the addition of instanced events and boss battles give the player a lot more to explore and a sense of progression that is difficult to deny. Google pauses accessibility app ban while it considers 'responsible and innovative' uses of the ...

Prisma adds HD image processing up to 12MP, but only with a subscription plan