The Snapdragon 845 was announced today, and after the press conference here in Hawaii came to an end this morning, Qualcomm unveiled the next-generation chip's reference platform to journalists.

Reference platforms serve as tools for Qualcomm and its customers (the companies that make phones), and they're usually pretty crude aesthetically. The one Qualcomm has whipped together for its 845 platform is kind of nice, though, big bezels aside. I can't really tell you much about using it - it's running Android and it's filled with diagnostic software and a few tightly-scripted demo applications you won't really care about. I can tell you what it does, though.

Qualcomm showed us a few of the enhancements you might be able to expect in your next smartphone, based on improvements made in the 845. Some of them were pretty boring (better VR performance), but some were quite compelling, like the power consumption demo we were provided. 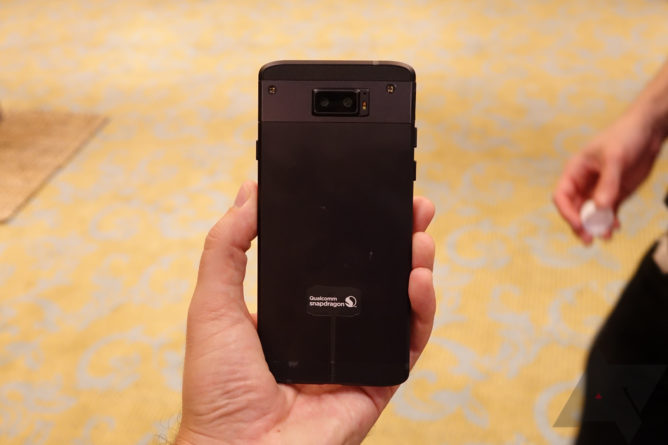 The Snapdragon 845 reference phone was pitted against the Snapdragon 660 and Snapdragon 835 reference platforms, all of which were connected to power meters. They all were playing back the same 1080p video file. One common misconception Qualcomm wants to correct is that mid-range chipsets are actually more efficient than high-end ones. The reality is that when performing the same task with the same performance demand, a more powerful processor will generally get the job done with fewer watts.

Decoding (that is, playing back) the video file, the mid-range Snapdragon 660 consumed, on average, 1560mW. This chip is fairly renowned for lasting a long time, too. The Snapdragon 835 came in at around 1470mW. The Snapdragon 845 managed nearer to 1350mW - around 15% more efficient than the 660. The all-new Adreno GPU - which Qualcomm will say nothing about other than it being faster and more efficient - and 3MB system cache both play a role here, allowing the much more powerful chip to accomplish the same task with a significantly smaller power footprint than the mid-range chip. 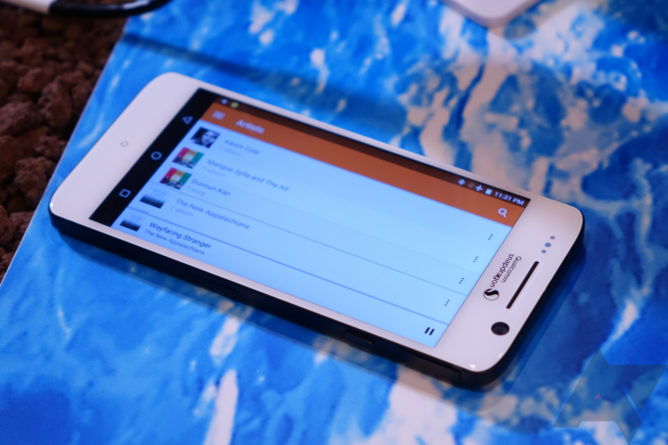 In a more direct GPU comparison, Qualcomm ran the GFXBench Manhattan OpenGL 3.1 benchmark on a Snapdragon 835 and an 845. The difference here was pretty staggering: the 845 consumed a little under 25% less power while running the benchmark compared to the 835 (2950mW or so versus 3790mW). Clearly Qualcomm has made some big strides on the GPU in this next-generation chipset.

We also got a look at the X20 LTE modem in action, which Qualcomm says will allow maximum data throughput of 1.2Gbps down. While Qualcomm fully acknowledges most users will never see anything close to those speeds any time soon, they argue the underlying technologies still make for a better LTE experience overall. The Snapdragon 845 supports bonding up to 12 data streams across five aggregated bands (carrier aggregation). If your wireless carrier supports 5x carrier aggregation (none yet do), this could still improve your phone's LTE performance. 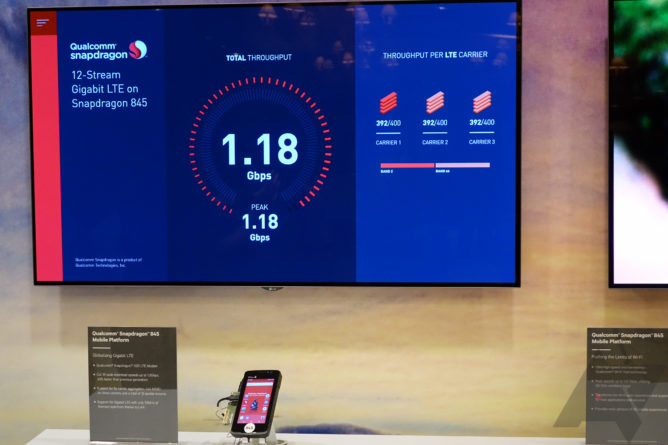 1.2Gbps LTE is possible... in a highly-controlled setting with a dedicated small cell and a server rack behind a curtain.

Qualcomm also demoed the enhanced LTE throughput by streaming an HDR video over a mobile network, which is fine and all, but I was more impressed with the fact that the demo device they did it on was also in mobile hotspot mode - using Wi-Fi ad. There's only one phone out there that even supports Wi-Fi ad at the moment (ASUS makes it), and Qualcomm is hopeful that the 845 will force the issue of adoption a little more. They've even designed a nifty dual antenna for it, because the 60GHz transmission is so easily impeded that even holding your phone the wrong way will completely block the signal. When this happens, the phone quickly switches over to the second antenna on the other end of the device. Just don't hold your phone with two hands while you're on ad Wi-Fi, I guess.

What's neat here is we're actually getting a little peek into 5G, because most people expect millimeter wave - which Wi-Fi ad uses - to be a big part of 5G networks. This is Qualcomm's way of beginning to figure out how a real-world millimeter wave antenna is going to have to be built and operate effectively on a smartphone, so that's pretty cool!

Finally, we learned a little bit more about the DSP and audio "codec" (Qualcomm's term for the DAC and amplifier). Snapdragon 845 will be the first chipset Qualcomm has offered that will support dual hotwording - meaning phones with the 845 will be able to store up to two always-listening phrases (Amazon is probably thrilled). They also claim that the 845's always-on listening should provide better noise cancellation and far field performance, so your phone is more likely to hear you in a noisy environment or when you're not especially near it.

I'll have more for you, hopefully, about some of the details as we go to various talks tomorrow discussing some of the changes in the 845 (one talk will be on audio, for example). But that's a quick glimpse into a few of the things you might be seeing on your next phone.