There are two ways to get the second dev preview. If you have an unlocked bootloader, you can grab the updated system images and flash them with ADB. They all come with build number OPP6.171019.012. There are images for all the existing text devices including the Pixel 2, Pixel 2 XL, Pixel, Pixel XL, Pixel C, Nexus 6P, and Nexus 5X.

If you don't have an unlocked bootloader, the Android beta program delivers the developer preview version to devices via an OTA. You can enroll on the beta site as long as you have an eligible device on your account. If you already joined for the last DP, the new version will appear automatically. However, OTAs aren't going out just yet. These usually appear a little later than the system images, so stay tuned.

Make sure to check our 8.1 feature spotlights and the original changelog to see what's new in Android 8.1. The only fix in DP2 specifically called out by Google is related to the new neural network APIs. This version should also open up an early version of Pixel Visual Core to developers. If the schedule holds, this will be the last dev preview before the final release in December.

OTAs are now being pushed. 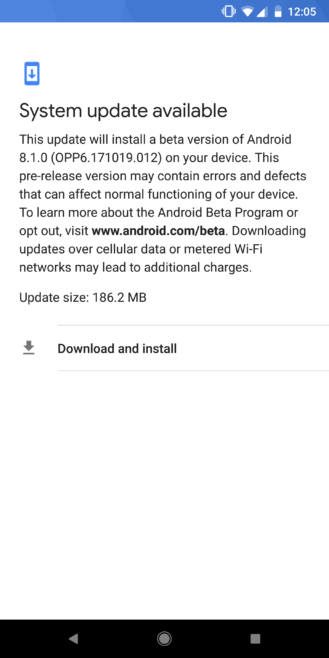 They weigh in at 118.9MB for the 6P, 186.2MB for the Pixel 2 XL, and probably some number in that vicinity for other supported devices. The changes compared to DP1 have been minor, but we'll be sure to let you know if we find anything substantial.

Burgundy Red Galaxy S8 is now available in Korea, will come to other markets soon