At a post-Thanksgiving potluck yesterday, a friend and I were sharing our enthusiasm for Android with someone who recently switched to the platform. One of the first things I always tout in these conversations is Google Opinion Rewards, the app that gives you free Play Store credit in exchange for answering survey questions. As I was talking through it, I took out my phone and opened the app to show my reward history (a shade under $90 since 2014).

Sadly, it appears that some Opinion Rewards users recently lost the luxury to do that at all, thanks to a glitch that loads HTML code instead of readable, formatted text and images within the app. Users experiencing the issue see pages of HTML code when they click on a survey notification or when they go to the app's 'Home' and 'Reward history' screens. 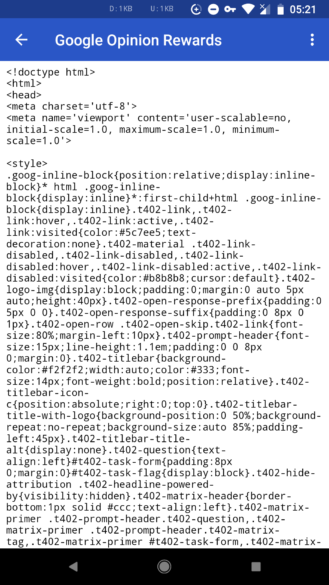 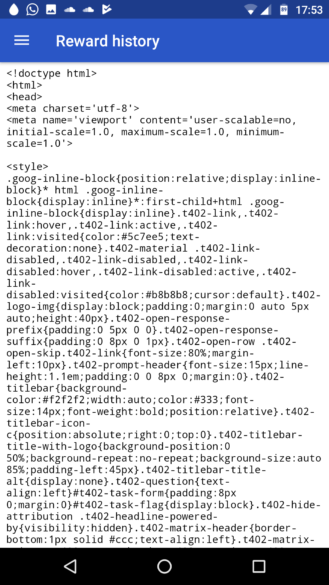 Left: Opinion Rewards after a user tapped on a survey notification. Right: The 'Reward history' screen

The pages of code take a while to load and flick through. One user says reinstalling the app did not resolve the issue.

If you're seeing this, try going to the 'Help & feedback' screen and sending Google an email describing the issue, along with a screenshot and logs. You can also send an email to [email protected], the developer contact email address listed on the app's Play Store page.

Some of you have pointed out in the comments that having Chrome Dev as the default WebView implementation (the Android component that renders web pages in apps) causes the issue. Going into the system Developer Options and switching it back to Android's built-in WebView seems to fix the bug.

We've received multiple reports that the issue is now fixed. Make sure you're on the latest version of Chrome Dev (64.0.3281.0) or higher, and everything should work.

Oreo comes to the OnePlus 5 via the first Open Beta