While some Bluetooth earphones like Bose's SoundSport Free can be updated easily over-the-air, others require a desktop updater. Jaybird's RUN and Freedom are among the second group, and although updating is a little annoying, it can be done. And if you happen to own a pair of the RUN wireless buds, you'll be happy to learn that version 1.1 of the firmware makes signal reception much better.

When it comes to fully-wireless Bluetooth earbuds, connectivity issues are the worst. Artem had always had some reception problems with his RUN review unit, and Jaybird even sent him a new unit shortly after launch that supposedly improved connectivity. It turns out that the two units had identical hardware, but while the first RUN had v1.0.4 firmware installed, the second had v1.1. Early retail units also shipped with v1.0 firmware.

Thanks Artem, we saw areas to improve and reacted as quick as possible. We are happy you are enjoying the improved experience.

Updating can be done via Jaybird's tool here for both Windows and macOS. It's a bit tedious, as you do have to insert each bud into the case one-by-one to update, but Artem was wowed by the improved connectivity after updating to v1.1. Whereas he previously couldn't get through a song without multiple skips, the playback is now flawless, even when you place your phone in your left pocket (which Jaybird doesn't advise since the right bud is the main one). 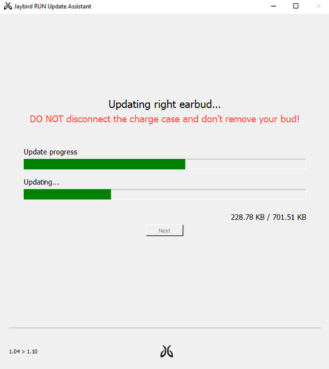 The desktop updater at work.

Jaybird's been all over negative Best Buy reviews telling customers to update for the vast connectivity improvements. So if you've been frustrated with your Jaybird RUN (or Freedom), download the updater and check if there's any new firmware available. You just might be pleasantly surprised.