About a week ago, the smart home devices support page of Google Home was updated to add a host of new features that we hadn't heard about until then. We reached out to Google to get some information and we finally have a few answers to share with you.

First, Google Home is getting direct support for several appliances, including washers, dryers, robot vacuums, and dishwashers. Up until now, Home only had direct control of lights, switches, thermostats, and recently security cameras. Think Hue, Nest, LiFX, and so on. For other devices and appliances, you had to "ask serviceX to do an action" which required Home to call up a different service and use a different voice when talking to you. It also meant that you had to remember exact phrases to trigger something, you didn't have the benefit of Google's natural language processing to understand your command.

Now, companies will be able to integrate their appliances directly with Google Home, just like they do for lights and switches. This lets you start, stop, and pause all of the appliances, dock the robot vacuum, and control the mode or check the run cycle of the washer, dryer, and dishwasher.

Samsung is the first partner to implement this: you can check its Assistant page here. It details how to connect your appliance with Google Home as well as the different voice commands and actions supported. LG and GE's appliances may have been the first to work with Home, but they're not directly integrated and require the "talk to LG Smart" or "talk to Geneva Home" commands. It could be only a short time until they move onto the more direct control. The same goes for the Roomba robot vacuums. 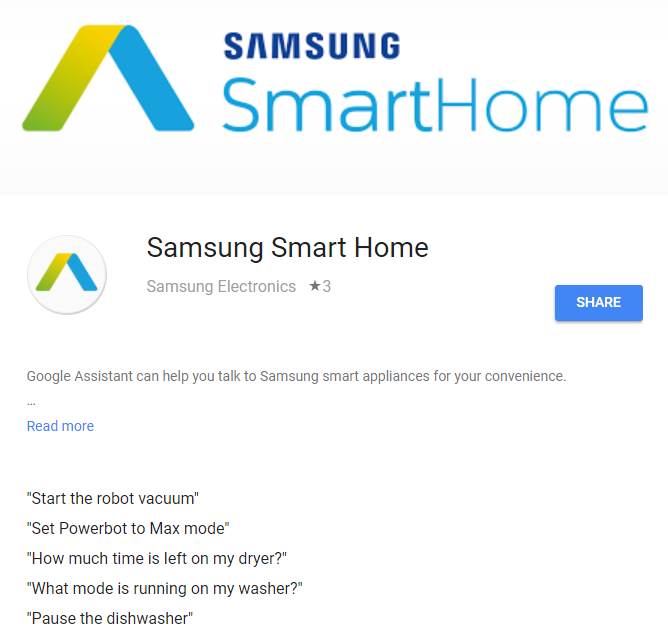 The second new feature coming to Assistant are scenes. We don't have many details and clear answers regarding this, but you should technically be able to "activate" and "deactivate" a scene. Up until now, scenes from my LiFX account were added to Google Home's home control devices as lights and treated as such: I could turn them on or off with a voice command. So it's not like scenes weren't supported at all.

SmartThings recently added scenes too, and after I disabled then reenabled the SmartThings integration in my Google Home app, I saw my new scenes as well in the list of devices. But they're still treated as lights, not scenes. I was able to ask my Google Home to "activate" them ("deactivate" threw an error), but I'm not sure if that's because they're treated as lights or as scenes.

If you have any insight regarding scene support, please do leave a comment below. It's confusing to me because they've always worked as a light previously, and the SmartThings integration coincided directly with the "scene" commands being added, so I wasn't able to test whether they worked before or not.

We've reached out to Google and learned that scene support is now official, as per the API documentation mentioned in the comments of this post (Thanks, Nick Felker!). Some partners who are confirmed to have enabled proper scene support are SmartThings, Lutron, and TP-Link.