Motorola launched the Z2 Force a few months ago with a whopping $720 price tag, and that's if you got it from Motorola. Most carriers are charging even more than that to this day. However, T-Mobile has been pushing this phone for a mere $500, and today it's cheaper still. The Z2 Force is just $375 right now.

The Z2 Force has a 5.5-inch shatter-proof OLED panel, and you can snap Moto Mods onto the back. The Mods are expensive, but with a steep discount on the phone, you might be able to justify a battery or one of the other Mods. The Z2 Force also packs a Snapdragon 835, 4GB of RAM, and a 2,730mAh battery. Not the largest lithium-ion cell, but the phone is only 6.1mm thick. 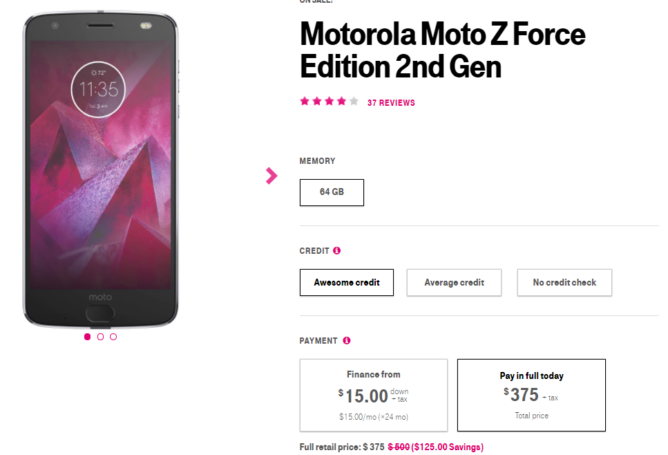 T-Mobile is offering this phone for $375 up front, or you can pay $15 per month for 2 years. That's less than half what the same phone costs on AT&T, Verizon, or Sprint. Seriously, AT&T still wants over $800 for this device. The Z2 Force isn't my favorite phone, but $375 is a very good deal.