Back in the summer, we reported on key changes to Google Flights on mobile. The interface was tweaked with more powerful tools to help you save money when looking to book a holiday within a range of dates. At the time Google promised the desktop version would see a similar update later in the year, and that has now become available in the form of a beta version. 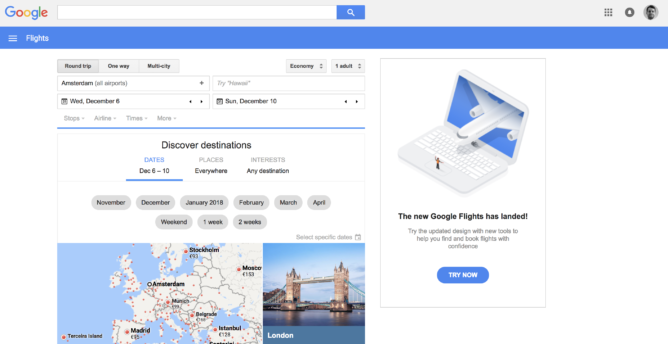 If you head to the google.com/flights as usual, you'll see a banner on the right-hand side inviting you to try out the redesigned Google Flights. Clicking it will take you to the beta site, which is instantly much more visually appealing. The old interface was almost entirely white, except for the few interactive elements pushed to the top left. The new Google Flights centers the flight planning input and adds a holiday background image to give the page a bit more character. The rest of the background is now grey rather than white, and the search tool itself has been simplified. 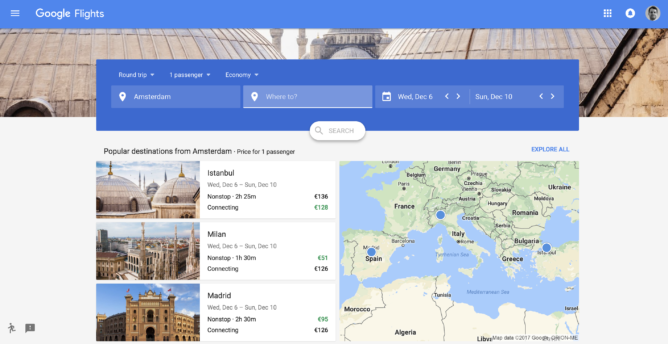 The other noticeable difference is that if you scroll down on the old site, you'll get a long list of around 25 potential destinations, along with keyword descriptors, flight times, and minimum prices. The new site assumes that you probably already have a destination in mind, and so only shows you three suggestions. You can click 'Explore All' so see more if you'd like to, but there's no longer a wasted list that likely nobody ever scrolled through.

All in all, the new interface serves as a modern update that's more in line with Google's other products and its current design direction. It should be slightly easier and more pleasurable to use, but it's not going to change your life. Ultimately, I'll probably continue to use Skyscanner.

I’ve never used an iPhone, part one: Switching to the iPhone X and first thoughts