The new 5T hotness in town is getting a lot of attention these days, but OnePlus is giving owners of its 2016 flagship smartphones a big pat on the back today with its rollout of OxygenOS 5.0, its first official Android Oreo OTA for the 3 and 3T. This comes about a month after owners of these devices were able to get Oreo through the Open Beta program. OnePlus continues to boast impressive turnaround times for its stable build updates.

Here's an overview of the official Oreo build for the 3 and 3T:

Parallel apps, a feature that first made its debut in an OxygenOS Open Beta update in August, lets you run multiple instances of an app on your phone. There are third-party apps like App Cloner that enable you to do this on your device, but having the feature built into an OS makes for a better experience. You can see the list of supported parallel apps by going to Settings > Apps > Parallel Apps. 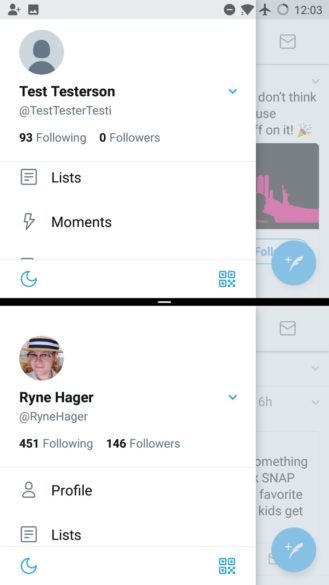 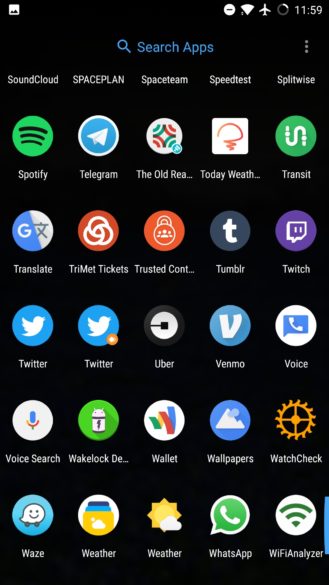 Left: A split screen showing two instances of the Twitter app running in parallel. Right: In the app drawer, parallel apps are denoted by a circular yellow icon in the bottom right. 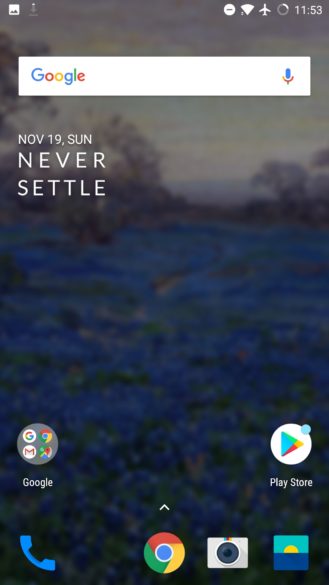 A notification dot appears in the top right of the Play Store icon. The new app folder design is visible in the "Google" folder.

Picture-in-picture, autofill, and smart text selection are among the many Android O features that have been previously covered.

If you're rooted and need to download the full image, the file is nearly 1.5GB large. OnePlus notes that the OTA will be incremental and that just a small percentage of 3 and 3T owners will get the OxygenOS 5.0 OTA today. A broader rollout will begin in a few days. But if you're impatient, you can always use a VPN set to Germany to get the OTA right away. 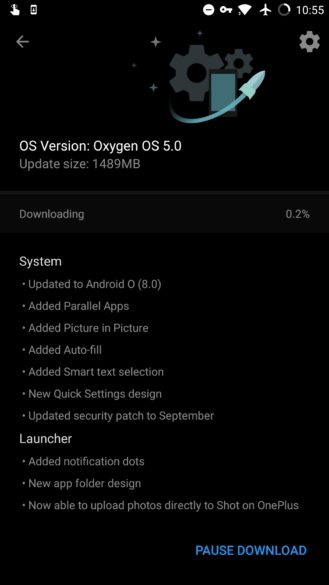 It's worth noting that flashing the OTA from TWRP turns up "Error: 7," which indicates a device name mismatch. So if you're rooted and need to flash the OTA from custom recovery, you'll have to find a workaround with a build of TWRP that's not set to verify device names from images, which is risky. Or you'll have to pull the stock recovery, flash that separately, then flash the OTA. 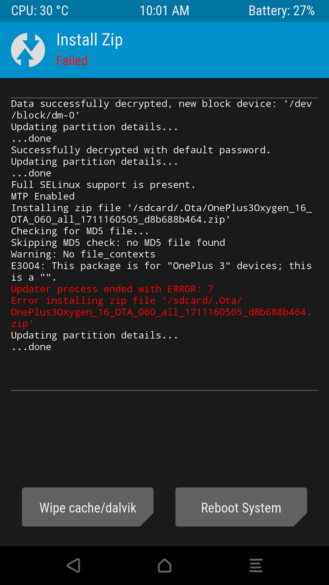 If you own a 3 or 3T and want to prepare for the Oreo OTA to hit your device the good old fashioned way, you must be on OxygenOS 4.5.1, the latest Android 7.1.1 update, in order to get it.

OnePlus 3 and 3T owners who are in the Open Beta program already received an Oreo update a couple days ago, which brought improvements like a new UI for Do Not Disturb, optimized standby battery usage, and the October 2017 Google security patch.